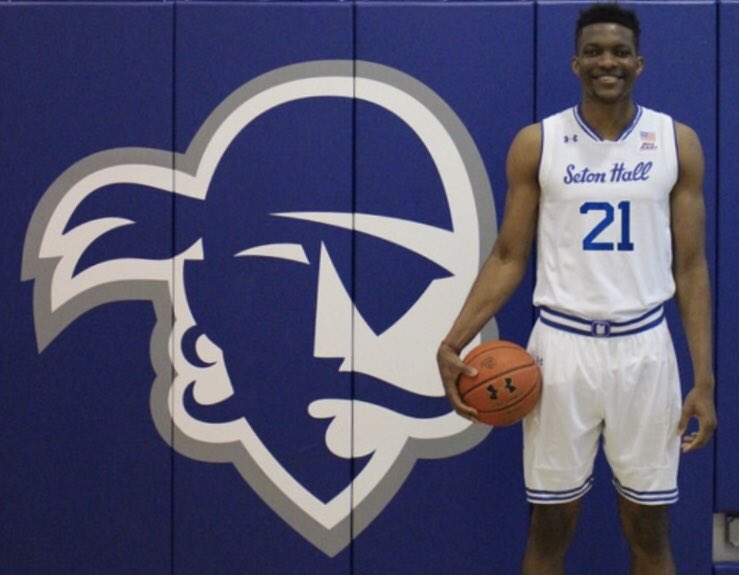 By ADAM ZAGORIA Seton Hall on Thursday officially announced the addition of 7-foot Nigerian Ike Obiagu, who committed May 17 on his official visit. Obiagu averaged 2.3 points, 2.6 rebounds and 2.1 blocks last season at Florida State. He sits one season to play three. New assistant Tony Skinn, also Nigerian, gets the assist on the addition. Gonzaga, Baylor, Texas A&M, Georgia and Auburn also reached out, per ESPN’s Jeff Borzello. “We are very excited that Ike has chosen to continue his college career with us and we welcome him to our Seton Hall basketball family,” head coach Kevin Willard said. “We now have one of the nation’s top shot blockers in our program, and while he sits out this upcoming year, he will have the opportunity to enhance his offensive skills through our individual instruction.”

First of all I want to thank the schools and coaches that recruited me. But I’ve decided to further my education and basketball opportunities at Seton Hall University ?? pic.twitter.com/DJ8kGiiimb

Obiagu’s top performance of the season came in the regular season finale vs. Boston College on March 3, when he blocked a career-high seven shots and grabbed a career-high 12 rebounds. He also had a great game against Rutgers in the ACC/Big Ten Challenge back on Nov. 28, 2017 with 10 rebounds and five blocks. Obiagu’s 71 blocks on the year were the third-most by a freshman and seventh-most by any Seminole in Florida State history. Prior to beginning his college career at Florida State, Obiagu was a star performer at Greenforest Academy in Decatur, Ga., where he played on the varsity team all four years. As a junior, he averaged 8.1 points, 7.8 rebounds and 6.8 blocks and helped lead Greenforest to a 31-2 record and the Class A Private School state championship. He had an incredible 20 blocks in a single game against Our Lady of Mercy on Feb. 23, 2016. Then as a senior, Obiagu earned Atlanta Journal-Constitution Class A first-team All-State honors after averaging 8.4 points, 9.5 rebounds and 7.2 blocks. He posted two triple-doubles on the season, including an 11-point, 12-rebound, 11-block performance against Our Lady of Mercy on Dec. 9, 2016. He helped Greenforest to a 27-5 record and a second straight Class A Private School state championship. Obiagu, who was a consensus, four-star top-10 recruit from the state of Georgia, also had a strong presence on the AAU circuit, playing for the Georgia Stars, which won the 16U Peach Jam championship in 2015. Obiagu joins a Pirates squad that will have a new look in 2018-19 after graduating four starters that piloted the program to three straight NCAA Tournament appearances. The returners include 2018 BIG EAST Most Improved Player of the Year junior Myles Powell as well as senior Michael Nzei, who looks to become only the third Pirate ever to appear in four straight NCAA Tournaments. They will be joined by sophomore contributors Myles Cale, Sandro Mamukelashvili and Shavar Reynolds, juniors Romaro Gill and Quincy McKnight and sophomore Taurean Thompson, who all redshirted in 2017-18, and incoming freshmen Darnell Brodie, Anthony Nelson and Jared Rhoden.  Follow Adam Zagoria on Twitter And Like ZAGS on Facebook

Seton Hall's Delgado works out for Lakers, Jazz up next