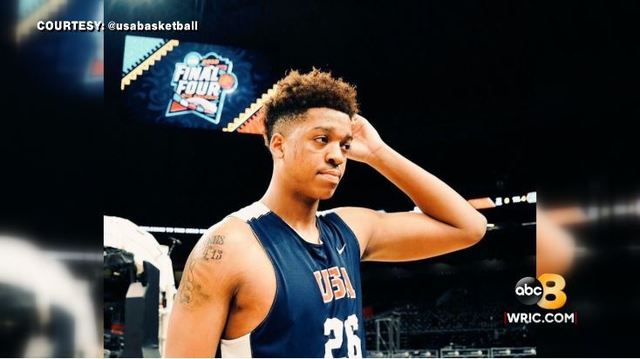 By ADAM ZAGORIA Between his switch to the Nike EYBL circuit, his ongoing recruitment and his goals with USA Basketball, Armando Bacot has a lot going on this spring and summer. The 6-foot-10, 238-pound power forward from Trinity Episcopal School (VA) switched to Team Takeover on the Nike circuit from Team Loaded on the Adidas one. Though he’s still adjusting to his new teammates, Takeover went 4-0 this past weekend in Indianapolis. “I just wanted to get an opportunity to play on the EYBL and just wanted to finish off with who I started with,” Bacot said Tuesday by phone. “My mom thought it would be a good move for me.” Takeover has a loaded roster and Bacot is settling in nicely. “I thought I played alright,” he said. “It wasn’t my best basketball. Playing with a different crowd, different people, it was just different. I’m trying to get acclimated with the team and stuff. But I think it was a successful weekend. I got to bond with the team and we went 4-0.”

A slew of high-major coaches watched Takeover, which also includes 7-foot junior Hunter Dickinson. North Carolina’s Roy Williams and Hubert Davis sat on the baseline for Takeover’s first game to watch Bacot, ranked No. 20 in the 2019 ESPN 60. They also visited Bacot last month, and he took an unofficial visit to campus. “I feel like I’m their top priority, they’ve really been recruiting me hard,” Bacot said. “He feels like I can be a great player there and I can excel. With my playing style, I can show a lot of versatility and just showing what I can do.” “They’ve been to my school about four or five times, Roy Williams. And I just recently went up there, like last week.” As for his visit, “It was great. Good environment, I got to talk to the education people and the strength trainer and all that.” Bacot also listed Duke, VCU, Virginia Tech, Oklahoma State and Georgia among the schools working hardest. He broke down each school: Duke: “I talk to coach [Nate] James like two or three times a week. Obviously, if I went there they would want another big to go there. They would want two bigs, so it’ll be like that.”  (Duke is also in the mix for 2019 big man Vern Carey.) VCU: “VCU’s message is it’s the hometown city [Richmond]. I can come in and I live like five minutes from VCU.” Virginia Tech: “They’re big on development and think we could have a great team there my freshman year.” Georgia: “Coach [Tom] Crean, he got a [home] visit from me. He feels like I can be a one-and-done. He talks a lot about developing me as a player. He coached a lot of pros and stuff like that, so that’s basically their message.” Oklahoma State: “They want me to come in and make an impact early. They feel like I can be a great player there and they feel like with their offense, I would be able to excel and score the ball and rebound the ball and do it all.”   Looking ahead, Bacot has lofty goals, including trying to capture a gold medal with the USA U18 team at the FIBA Americas U18 Championship for Men June 10-16 in St. Catharines, Ontario and trying to win Peach Jam in July. He was one of 21 players in the Class of 2019 invited to the Next Generation Sunday program at the Final Four in which the American players competed against NBA Academies from overseas, attended the national semifinals and played on the Alamodome floor the day before Villanova topped Michigan in the NCAA championship game. “It was a great experience, just being able to see the Final Four and see how everything works,” he said. “I got to see if I went to college, the different opportunities if I were to make it to the Final Four.” Among those also expected to try out are New Jersey stars Bryan Antoine and Scottie Lewis, New York City’s Cole Anthony and Bacot’s Takeover teammates, Dickinson and Justin Moore, both of DeMatha (MD) Catholic. The team will be coached by Kansas coach Bill Self.
Follow Adam Zagoria on Twitter And Like ZAGS on Facebook