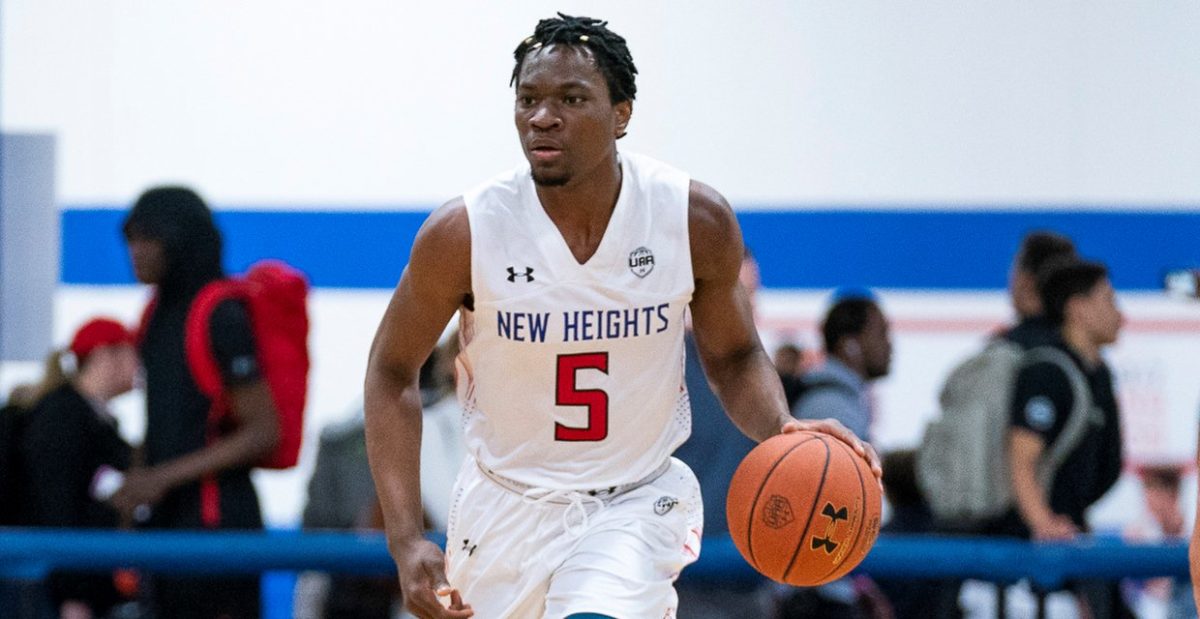 By ADAM ZAGORIA INDIANAPOLIS — Precious Achiuwa, the 6-foot-9 wing from the New Heights AAU program, is one of the top players in the Class of 2019. Yet he prefers to keep a low profile when it comes to recruiting, and is primarily focused on improving his game. “I haven’t really paid attention to the schools in the corner, I just come out every day to play and compete,” said Achiuwa, who is averaging 13.8 points and 8.0 rebounds on the Under Armour circuit, where New Heights is 6-2. Achiuwa, who averaged 20.9 points, 11.4 rebounds and 3.6 assists last season at St. Benedict’s Prep, holds offers from UCLA, Oregon, St. John’s, UConn, Kansas, UMass, Minnesota, Mississippi State, Ohio State, Syracuse, and VCU.

Achiuwa said he probably won’t focus heavily on recruiting until “sometime this summer, maybe July, I’ll put more attention toward recruiting and schools.” North Carolina coach Roy Williams has been a regular presence at Achiuwa’s games, dating back to when he and Hubert Davis watched Achiuwa go for 19 points, 10 rebounds, 4 blocks, 4 rebounds and 3 steals in a January win over Hudson Catholic at Kean University. Williams and the North Carolina staff kept tabs on Achiuwa all weekend in Indianapolis. “I think everybody knows one or two things about North Carolina, top five program in the country,” Achiuwa said. “But I haven’t really paid attention to the recruiting process, schools and all that. Right now I’m just focused on working my game and being able to get ready for whoever is out there. Just coming out and competing.” New UConn coach Dan Hurley, who coached at St. Benedict’s for nine years and who recently visited Achiuwa at the Newark school, also watched Achiuwa play this past weekend. New UConn assistant Kimani  Young is also the athletic previous director of New Heights. St. John’s is also involved heavily as Achiuwa’s older brother, God’sgift Achiuwa, played for former coach Steve Lavin. Red Storm assistant Greg St. Jean was on hand at Under Armour on Saturday. “The campus, my brother went there,” he said. “It’s close to my house. I think it’s just around my area so pretty much it’s comfortable I guess.” Kansas, Syracuse and Florida State have also watched Achiuwa. With fluid drives, athletic finishes, and a constantly improving skill set, Achiuwa is often a mismatch for opponents. “I just take whatever the defender gives me,” he said Saturday. “If I have a bigger guy on me, I have leverage to get to the rim much more easier. I always think I have the advantage because I’m faster than him and can dribble better than him and get to the rim a lot faster. Compared to if I have a little guy, I can just post up. I’m using whatever the defense gives to me.” Wherever he goes, Achiuwa has pro potential going forward. “He’s a pro, there’s not much to say,” Gray Bees coach Mark Taylor said in January. “He might be the best I’ve ever coached and I had Jay Williams, who was No. 2 in the draft, I had Tyler Ennis, No. 18, and Andrew Bynum, No. 10 in the draft. We’ve had other players make the pros. “The thing with Precious is, his tools are different. He’s 6-9. His hands are big. He’s athletic. He touches almost the top of the backboard. He blocks shots, he dunks, he runs the floor, he can shoot the three. He just has so many different things that he can do that he can dominate in different areas of the game, which is rare.” He added: “I think everybody in the country should offer him. The kid is that good and he’s got a 3.8 GPA, so he’s the complete package on and off the court.” Photo: Under Armour Follow Adam Zagoria on Twitter And Like ZAGS on Facebook