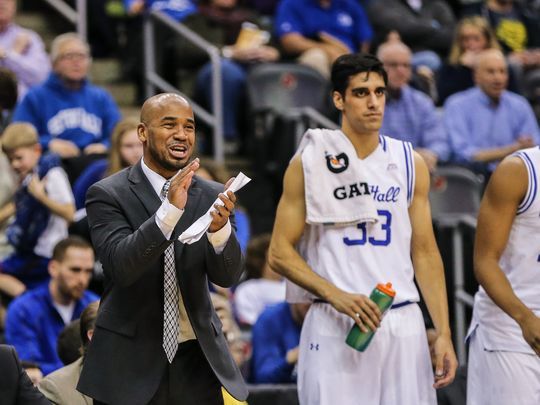 By ADAM ZAGORIA Seton Hall associate head coach Shaheen Holloway has agreed to become the new head coach at Saint Peter’s University, multiple sources told ZAGSBLOG. The deal is for at least five years, sources said. A press conference is set for noon on Thursday. St. Peter’s AD Bryan Felt attended Seton Hall and was the associate AD there, so he is well aware of Holloway’s background. “Saint Peter’s has hired a rising star in Shaheen Holloway,” Pirates coach Kevin Willard said Wednesday in a statement. “I am incredibly excited for Shaheen and his opportunity to lead his own program. He has been by my side for 11 years, and he has been instrumental in the program we have built and the success we have achieved here at Seton Hall. He is a dedicated student-athlete mentor, ace recruiter, a terrific skill development coach and an even greater person.” Holloway, 41, is a Queens, N.Y., native and former star at Seton Hall and St. Patrick’s High School, where he played for legendary coach Kevin Boyle and competed in the 1996 McDonald’s All-American Game. “It’s well deserved,” Boyle, who played at Saint Peter’s and coached Holloway at St. Pat’s, told ZAGSBLOG. “He’s one of the all-time great high school and college players in the metro area. He’s an excellent recruiter and now will shine as a head coach.” After his professional playing career ended, Holloway served an administrative assistant for former Seton Hall coach Bobby Gonzalez from 2006-07. Holloway then joined Willard’s staff at Iona, and then came back to Seton Hall with Willard in 2010. The Pirates have been to three straight NCAA Tournaments and won the Big East Tournament title in 2016. Holloway has been a critical recruiter at Seton Hall, helping them land the current senior class of Khadeen Carrington, Angel Delgado, Desi Rodriguez and Ismael Sanogo. The first three are participating in the Portsmouth Invitational this week. The job came open when John Dunne left to take the Marist College opening. Photo: Seton Hall Athletics Follow Adam Zagoria on Twitter And Like ZAGS on Facebook