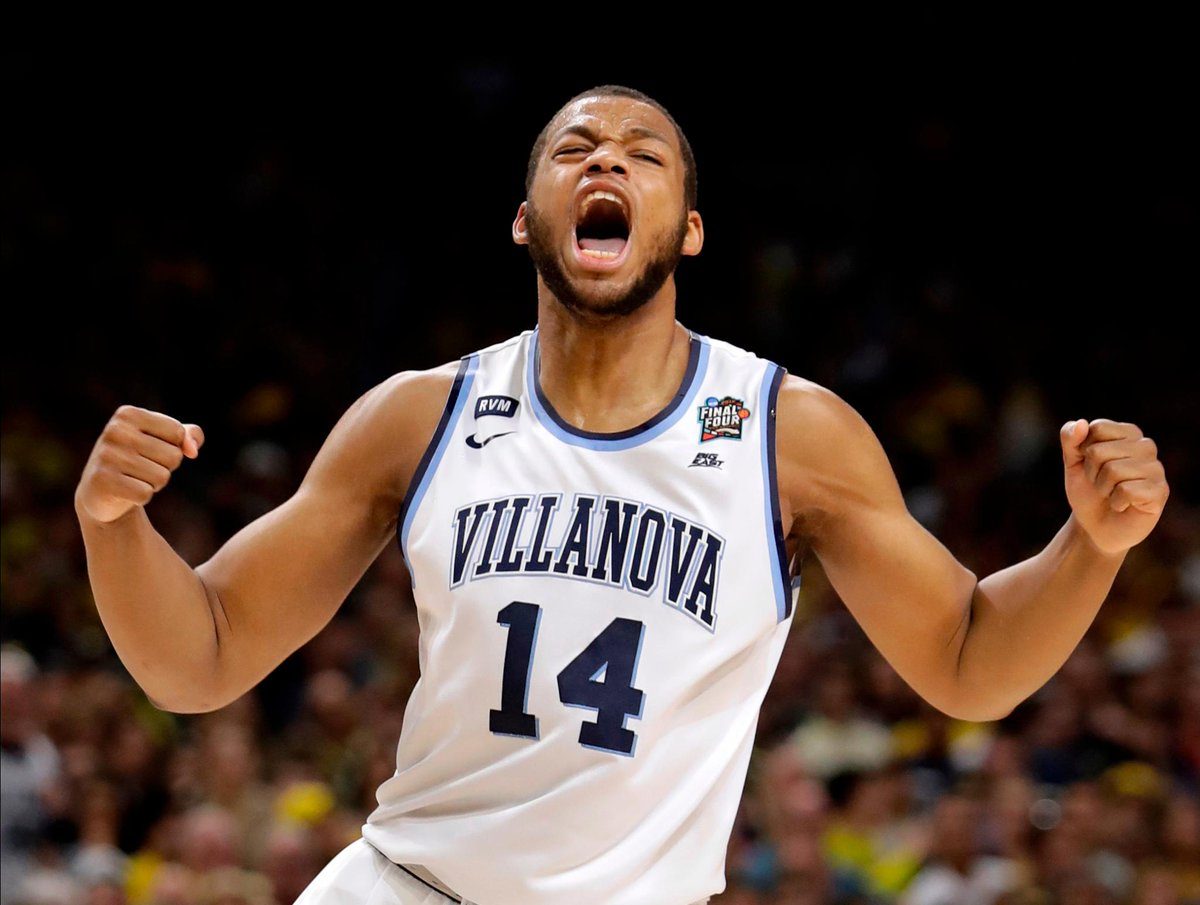 By ADAM ZAGORIA SAN ANTONIO — Kris Jenkins, the man who made the most famous three-pointer in the history of Villanova basketball, sat courtside Saturday night at the Alamodome as his old team put on a long-distance shooting display that even impressed him. Jenkins stood and cheered throughout a historic performance during which the Wildcats made 18 three-pointers to set a new Final Four record as they blew out Kansas, 95-79, to advance to Monday night’s NCAA championship game against Michigan. The Wolverines ended the Cinderella run of Loyola-Chicago, 69-57, in the first semifinal. Villanova made as many three-point baskets as it did two-pointers in the game. The Wildcats also made just five free throws in the game. To put the night in some perspective, Michigan and Loyola combined for eight threes in the first semifinal. “I expect this, this is what we work on when we’re in school, this what they work on so nobody in the Villanova basketball family is surprised,” Jenkins told me courtside. “They missed a couple open [threes], so they should have more.” Villanova, the Big East Tournament champion, entered the game having made 48 three-pointers through four NCAA Tournament games, and with 436 on the season. When the night was over, the Wildcats had tallied 66 in the Big Dance — also an NCAA Tournament record — and 454 on the year. The most three-pointers in any NCAA tournament game is 21, set by Loyola Marymount against Michigan on March 18, 1990, according to David Worlock of the NCAA. Eric Paschall went for a season-high 24 points with 3 rebounds and 3 assists for Villanova, Omari Spellman had 15 points and 13 rebound and Jalen Brunson tallied 18 points and 6 assists. Donte DiVincenzo added 15 points and Phil Booth 10. Villanova won by 16 on a night when Mikal Bridges, a projected lottery pick, went 4-of-8 for 10 points. “I thought they were great,” Kansas coach Bill Self said. “That’s as good a team as we’ve played against, that I can remember….They’ll be hard for anyone to deal with if they shoot the ball like that.” Jay Wright and the Wildcats will now try to win their second NCAA title in three years — after Jenkins’ game-winning three at the buzzer over North Carolina in 2016 in Houston — while Michigan will try to win its second overall. “Tomorrow we’re going to get better at practice and we’re going to try to be the best team we can on Monday night,” Brunson said. Asked if they can keep this pace from downtown up on Monday night, Jenkins said, “I expect nothing loss, and they expect nothing less. They hold themselves to a high standard. Villanova over the years, our standard has increased and it’s gotten higher and higher, and it’s going to continue to go that way so we expect nothing less on Monday.” Kansas, the Big 12 regular-season and conference tournament champion, was seeking its fourth NCAA title, and first since 2008. But Villanova raced out of the gate making six threes among their first eight baskets for a 22-4 lead. Kansas’ only lead of the game came at 2-0, and the last time they were within single-digits was at 11-4. “It’s a tough situation to put yourself in,” Kansas’ Malik Newman said. “That was just one of those nights, man, we made every shot to start the game,” Wright said. “I feel bad for Kansas, they’re a great team. We just made every shot. You can’t depend on that.” When Phil Booth made his team’s 13th three-pointer of the game with about 3:40 left in the first half, Villanova had tied UNLV’s Final Four mark set in a 1987 semifinal loss to Indiana. Villanova led 47-32 at the break.

oh, and this was just the FIRST HALF! #LetsMarchNova pic.twitter.com/cjpSLy3JD9 — NCAA March Madness (@marchmadness) April 1, 2018


Villanova has tied the #FinalFour game record for made 3⃣s…

When Paschall opened Villanova’s second-half scoring with a three from the right side, it gave the Wildcats 14 on the night — setting a new Final Four record. Kansas never got within single-digits in the second half. Jenkins, for one, enjoyed every minute of it. “It’s one of the best feelings I’ve ever had to watch these guys do what they’re doing right now,” he said. Photo: ESPN
Follow Adam Zagoria on Twitter
And Like ZAGS on Facebook