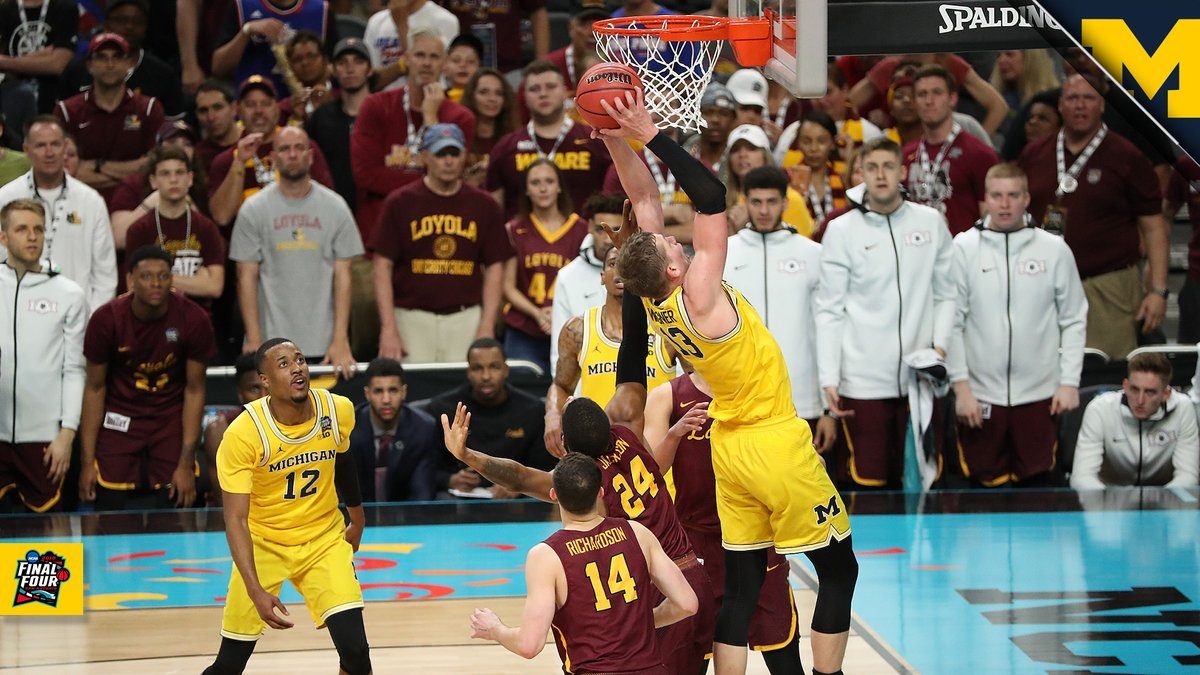 By ADAM ZAGORIA SAN ANTONIO — Moritz Wagner and the Michigan Wolverines are headed back to the NCAA championship game. Wagner went for 24 points and 15 rebounds as the No. 3-seeded Wolverines ended the Cinderella run of Sister Jean and the Loyola-Chicago Ramblers, 69-57, in the first national semifinal Saturday night at the Alamodome. Charles Matthews added 17 points for the Wolverines. Michigan, winners of 14 straight, will try to win its second NCAA title — and first since 1989 — when its faces the Villanova/Kansas winner here on Monday night. Michigan coach John Beilein is still seeking his first title. “We’re elated to get a win like that and the way we did it,” Beilein said. “Everybody’s really happy and we’re ready to move on to the next game, whoever it is.”

Michigan won the Big Ten Tournament title at Madison Square Garden and then waited nearly two weeks to play in the Big Dance. They have been the national runner-up five times, most recently in 2013 when they lost to Louisville. The Cardinals later vacated that title. Wagner became just the third player to go for 20 points and 15 rebounds in a national semifinal following Larry Bird and Hakeem Olajuwon. “Wow,” Wagner said, “if you put it like that, that’s it’s probably cool. But to be honest, I kept looking possession by possession, we had trouble scoring the first half. We scored 22 points and that was kind of the only way we found our way to the basket, grab offensive rebounds and get second-shot opportunities. “And I honestly just tried to do my job. The shots were falling the second half. It’s a lot more fun when the ball goes to the net. And, yeah, it’s just worked out that way.” Loyola-Chicago was attempting to become the first double-digit seed to reach the national championship game. Syracuse (2016), VCU (2011), George Mason (2006) and LSU (1986) all made the Final Four as double-digit seeds but never reached the title game. “I really like the saying Cinderella story because it includes somehow they’re not supposed to be there,” Wagner said. “But they’re playing incredible. They definitely deserve to be here.” Said Beilein: “I don’t know if they had magic on their side, they’re good. They wouldn’t be here if they weren’t good…They stopped being a Cinderella when they got to the [Sweet] 16.” After Loyola took a 29-22 halftime lead, Michigan outscored them 47-28 in the second half. Cameron Krutwig led Loyola with 18 points, Clayton Custer had 15 and Andre Jackson 10. Loyola led 44-37 midway through the second half, but the Wolverines rattled off a 19-5 run to go ahead 56-49.

Moe and @umichbball have COME ALIVE as they take a 54-47 lead with under 5 min to play! #FinalFour #GoBlue pic.twitter.com/EeOb5XwmEq

After a bucket by Ben Richardson, Wagner drained his third three-pointer to make it 59-51. After Michigan led by as many as 8 in the first half, Loyola took a 29-22 halftime lead by closing the half on a 19-7 run. Krutwig and Marques Townes had 8 points apiece at the half. Wagner notched a double-double in the first half of 11 points and 11 rebounds, including 5 offensive boards. After the game, Michigan freshman Jordan Poole tracked down Sister Jean to offer congratulations on their run. “I just told her I was a big fan,” he said. “Being able to build a fan base how she did and for Loyola to travel so well, I thought the entire concept was amazing. I thought it was pretty cool.” Photo: Michigan Basketball
Follow Adam Zagoria on Twitter
And Like ZAGS on Facebook

Xavier hires Travis Steele to be next head coach