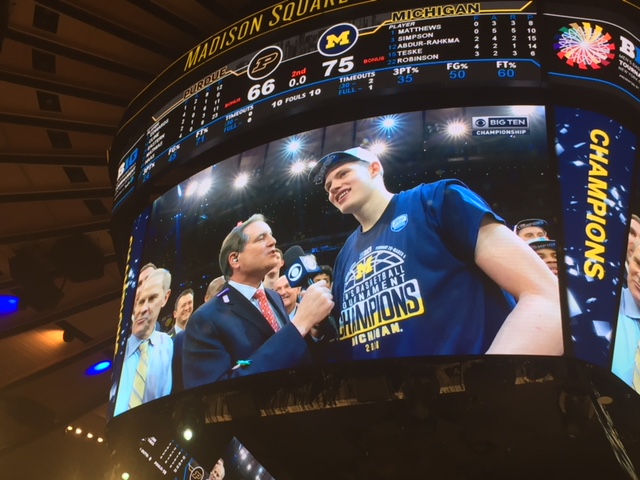 By ADAM ZAGORIA NEW YORK — After losing twice to Purdue during the regular season, Michigan got them in the game that mattered most. The No. 5-seeded Wolverines beat No. 3 Purdue, 75-66, to win the first-ever Big Ten Tournament held at Madison Square Garden. Michigan will take a nine-game winning streak into the NCAA Tournament and must be considered one of the hottest teams in the nation. The victory snapped a five-game winning streak for Purdue. After not winning a Big Ten title since their vacated crown of 1998, Michigan has now won the last two. The Wolverines won the 2017 tournament after their plane skidded off the runway at Michigan’s Willow Run Airport at 150 miles an hour as they headed to the event. Unlike the plane incident last year, there were no such obstacles this time around, other than playing the tournament a week early to compete at the Garden. Now both teams will have nearly two weeks off before the start of the NCAA Tournament on March 15. Michigan coach John Beilein said he once took his Richmond team fishing doing that team’s extended break between Selection Sunday and the start of the Big Dance. He joked that if the Wolverines did that this year, they might have to go “ice fishing.” “In a perfect world we’d be playing Thursday or Friday [in the NCAA Tournament], but if we can sacrifice that to come to New York City and win this, we’ll take it,” a smiling Beilein said on court. Michigan is currently a 5 seed and Purdue a 2, per ESPN’s Joe Lunardi. Junior Moritz Wagner scored of his 10 of his 17 points in the second half to lead the Wolverines and was named Most Outstanding Player of the tournament. Muhammad -Ali Abdur-Rakhman added 15 points and 4 assists and Zavier Simpson tallied 10 points, 5 assists and 4 rebounds. Sophomore center Jon Teske scored 12 points of his 14 on 5-of-7 shooting in the first half as the Wolverines seized a 38-33 lead. The Wolverines then opened the second half on a 17-9 spurt during which Wagner scored 10 points, including seven straight at one point, to seize a 55-42 lead. “We wanted this so bad and we got it,” Wagner said after his team won four games in four days, including a semifinal win over arch-rival and No. 1 seed Michigan State.

Moritz Wagner is on fire. pic.twitter.com/mUqcrET5sl

By the time Teske dunked on Isaac Haas to make it 66-48 with 6:03 remaining, it appeared to be a full on rout. The Boilermakers closed to within 73-66 in the final minute, but couldn’t get closer. Haas finished with 19 points and 6 rebounds, Carsen Edwards scored 12 points with 8 rebounds and Nojel Eastern added 11 points and 6 rebounds. Dakota Mathias scored 11. “We just look at the big picture,” Wagner said. “We want to be successful long term and this is the time to be successful. This is what we’ve been working for all year and here we are.”