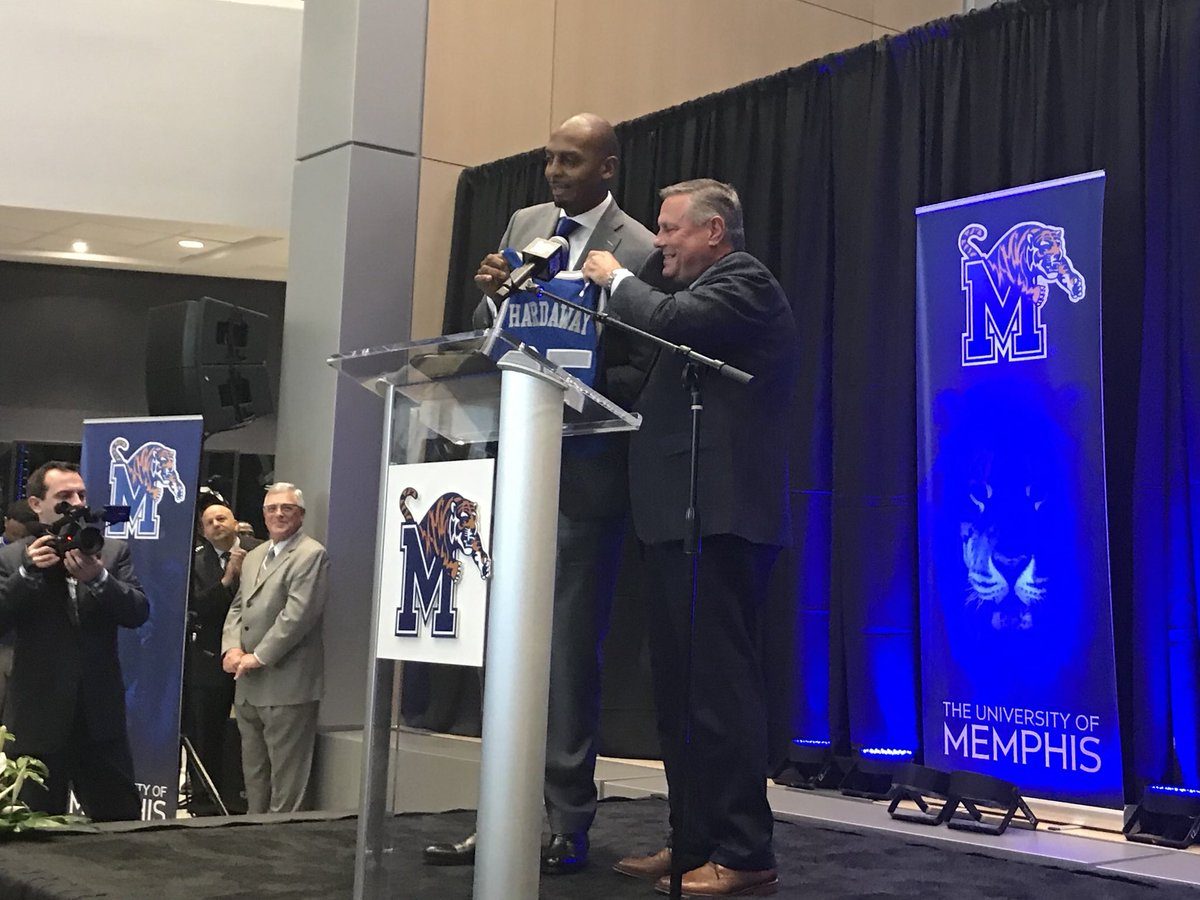 By CLAY BAILEY
MEMPHIS, Tenn. (AP) — In hopes of revitalizing its struggling basketball program, Memphis has turned to a favorite son to bring back fans and regain the school’s recruiting leverage in the basketball-rich city. Penny Hardaway, who starred two seasons at Memphis in the early 1990s before a successful NBA career, was named Tuesday as the Tigers’ new men’s basketball coach. Hardaway replaces Tubby Smith, who was fired Wednesday after two seasons as the Tigers coach. Hardaway could barely hide his enthusiasm in taking over a program where he starred and in a city where he grew up. He said becoming the coach at his alma mater was “a dream come true” as hundreds of blue-clad Memphis fans attending the introduction ceremony rose in a standing ovation. “Am I playing again?” Hardaway joked. “I do have one year of eligibility left. It’s an unbelievable day. “I couldn’t have dreamed anything any better.”

Smith’s tenure with Memphis fell short of expectations on the court and didn’t draw fan interest — a combination that led to decreased attendance and diminishing donations. Smith went 40-26 but failed to reach the postseason in his two seasons with the Tigers. The university owes Smith almost $10 million after buying out the final three years of his contract. Attendance this season dropped to 6,200 – its lowest in 48 years and a decrease of 3,400 from the 2016-17 season. There was a loss of $1.1 million in donations to the basketball program in the 2016-17 fiscal year, primarily from the decrease in season ticket sales. Memphis needed a jolt of rejuvenation. Hardaway — described as “the most electrifying history in Tiger history” in the Tigers media guide — was the university’s target from the time Smith was dismissed. “Penny, it is a pleasure to see you take this step and start to lead this program today.” Memphis President M. David Rudd said in introducing Hardaway. Athletic director Tom Bowen said the hiring of Hardaway “is an exciting day for the city and an opportunity that we have all thought about for many years and now has become a reality.” Hardaway has no college coaching experience but just led East High in Memphis to a third straight Tennessee Class AAA state title. He said former Memphis teammate Tony Madlock would be part of his staff. Madlock recently served as interim coach at Mississippi after Andy Kennedy stepped down. Hardaway emphasized that he wants the program to return to its glory days when the stands were packed, the university signed major recruits out of the city and games were a centerpiece of social calendars. “I told everybody, all I had to do was have the Memphis blood in me and the heart and the passion for winning basketball,” Hardaway said of his decision to take the job. “That’s all we need. .I’m coming here to make a difference, and I really feel like I can do so. Getting fans back in the stands like it was in the old school days. .I’ve missed those days. “We have to get those days back.” Hardaway becomes the third former Tiger player to take over the coaching reins of the program. Wayne Yates coached from 1974-1979, while Larry Finch won 220 games in leading the Tigers for 11 seasons from 1986-1997, including the two years Hardaway played for Memphis. Hardaway emphasized that he wanted to control the Memphis recruiting base, which many expect him to accomplish because of his knowledge of the local high school basketball landscape along with his status as an icon in the city. “It’s a family reunion,” Hardaway said of his return. “… I want to see the Memphis flags waving on the cars. I want to see the T-shirts going again, the hats going again like the old school days, and that’s what we want to take it back to.”     Photo: Gary Parrish / CBS Sports
Follow Adam Zagoria on Twitter
And Like ZAGS on Facebook