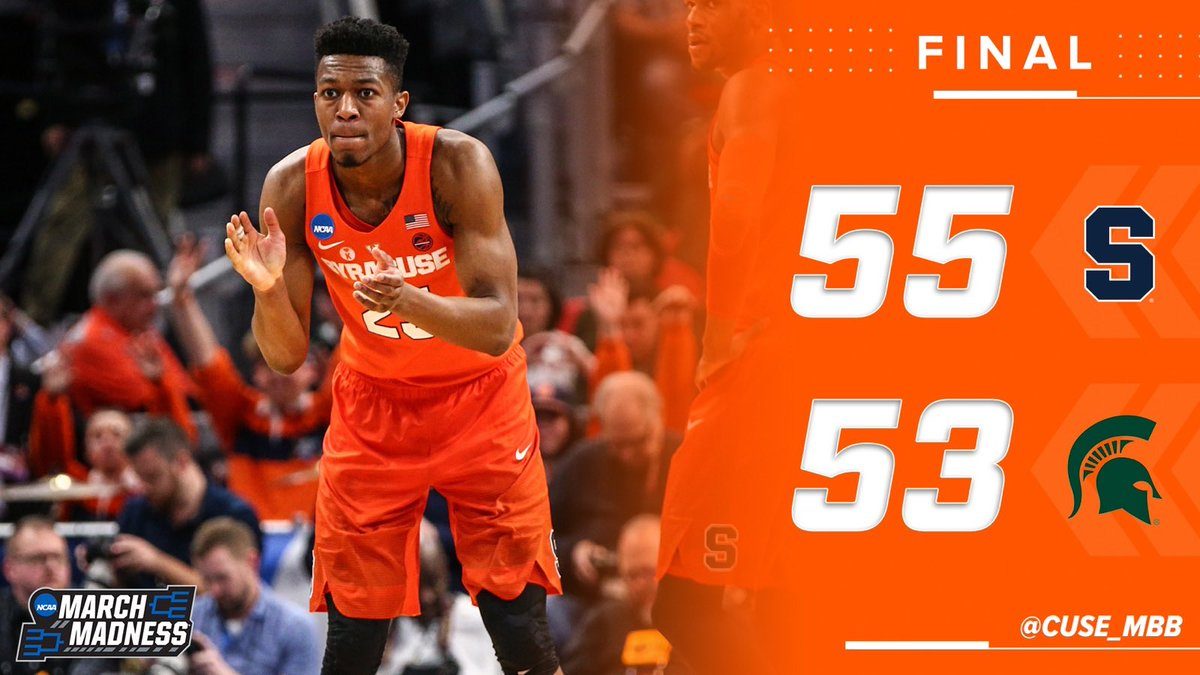 Syracuse is going to the Sweet 16 of the NCAA Tournament and Michigan State is going home. Tyus Battle made a huge pullup jumper with 19 seconds left and then more foul shots in the final seconds, and Paschal Chukwu made 1-of-2 foul shots as the No. 11 Orange defeated the No. 3 Spartans, 55-53, in Detroit to advance to a Sweet 16 matchup with Duke on Friday in Omaha, Neb. In their only meeting this season, Duke beat Syracuse, 60-44, on Feb. 24 in Durham, N.C. Syracuse was the last team in the Big Dance but has now won three straight games to reach the Sweet 16.

Syracuse to the Sweet 16 and Miles Bridges and Michigan State are done. pic.twitter.com/BJXcI3EX0z

Battle finished with 17 points on 4-of-15 shooting, Oshae Brissett scored 15 and Frank Howard 13 before fouling out. Bridges scored 11 points on 4-of-18 shooting in what was likely his final collegiate game. Cassius Winston scored 15 points with 6 assists and Nick Ward had 10 points for Michigan State, which out-rebounded Syracuse, 51-30. The 6-foot-6 Bridges is the projected No. 11 pick in the NBA Draft to Charlotte, per ESPN. Jaren Jackson, the 6-11 freshman who managed just 2 points in the game, is the projected No. 3 pick. Neither commented on their NBA Draft plans after the game.

Neither Miles Bridges, Jaren Jackson or Nick Ward would say if they’re deciding to leave school early for the NBA draft.

When I asked Cassius Winston, he laughed and said he’s for sure coming back. He’s not going anywhere. — Casey Harrison (@Casey_Harrison1) March 18, 2018

Michigan State was attempting to join Purdue and Michigan among Big Ten schools already in the Sweet 16.