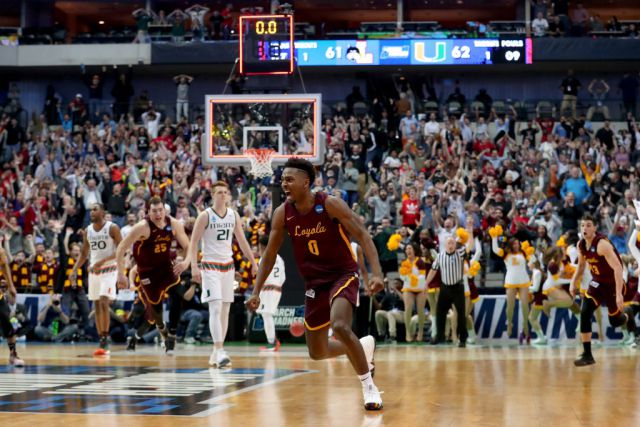 It didn’t take long for this year’s NCAA Tournament to register its first buzzer beater. 11-seed Loyola-Chicago, a chic upset selection in the South Region, downed 6-seed Miami, 64-62, on Thursday afternoon via Donte Ingram’s game-winning three-pointer from the top of the key with 0.3 seconds remaining.

The Ramblers, dancing for the first time since the 1984-85 season, advance to take on 3-seed Tennessee in a second-round pairing on Saturday. Miami star freshman Lonnie Walker did not end his career on a high note, assuming the projected lottery pick will be a one-and-done. In crunch time, he broke down defensively multiple times, committed a crucial late turnover, and missed the front end of a one-and-one that led directly to Ingram’s heroic moment. Based on lofty preseason expectations, Miami underachieved this season, Bruce Brown injury or not. The Hurricanes end the year with a 22-10 record and now will likely lose Walker and Brown as well as senior guard Ja’Quan Newton. Photo: Getty Images Follow Mike on Twitter Follow Adam Zagoria on Twitter And like ZAGS on Facebook