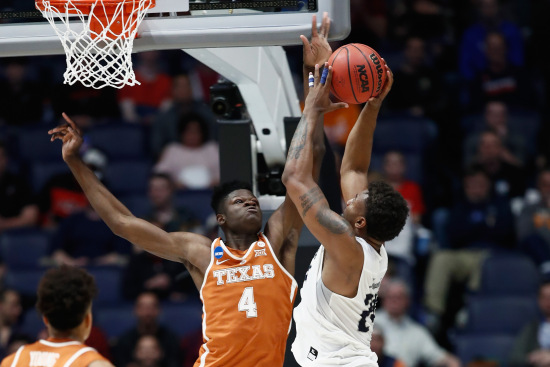 By MIKE McCURRY Texas missed the presence of Mo Bamba the moment he fouled out with 3.8 seconds remaining in regulation on Friday. It’s a void the Longhorns better get used to. 10th-seeded Texas blowing a 14-point lead and eventually falling to 7-seed Nevada in overtime, 87-83, in a South Region first-round matchup not only culminated UT’s season at 19-15. It also likely signaled the end to Bamba’s short stint at the collegiate level, as the 7-foot freshman center and Harlem native is currently projected to be the fifth overall pick in this summer’s NBA Draft, per ESPN. Bamba finished with 13 points, 14 rebounds, and 3 blocks in his presumed last hurrah versus the undersized Wolf Pack. While his offensive game still needs to be refined, his 7-foot-9 wingspan–it’s been widely reported that he will have the longest wingspan in NBA history as soon as he enters the league–9-foot-6 standing reach and elite physical tools allowed him to be one of the most disruptive defenders in college basketball this season. He was the largest reason as to why Texas boasted the 11th-best defense in the country, according to KenPom’s adjusted defensive efficiency metric. But, once he was called for his fifth foul on Friday–keep in mind, he fouled out just once in three years at Westtown School (PA)–all hell broke loose for the Longhorns.

Nevada scored on all 9 possessions in overtime (excluding running out the clock), including 6-of-6 from the field. pic.twitter.com/GxhIBqcz8T

Nevada coach Eric Musselman on Bamba fouling out with 3.8 seconds left in regulation: "It changes the complexion of who Texas is."

As such, Texas wasted career-best performances from Kerwin Roach (26 points) and Matt Coleman (25 points). The loss drops Shaka Smart to 50-50 thru three seasons in Austin. This year was especially trying when you factor in Andrew Jones being diagnosed with leukemia and Eric Davis sitting out the end of the season amid allegedly receiving impermissible benefits as revealed in the FBI documents. If the tune of highly touted NBA prospects not correlating to postseason success sounds all too familiar for Texas, it’s because it is. In this sense, Bamba is merely a statistic.

Mo Bamba will be Texas' eighth first-round draft pick in nine years. During that stretch the Longhorns have reached the Sweet 16 zero times.

But hey, at least we got to witness this back in December:

Mo Bamba is having quite a first half against VCU……and this dunk ? pic.twitter.com/vANeuf0xFk