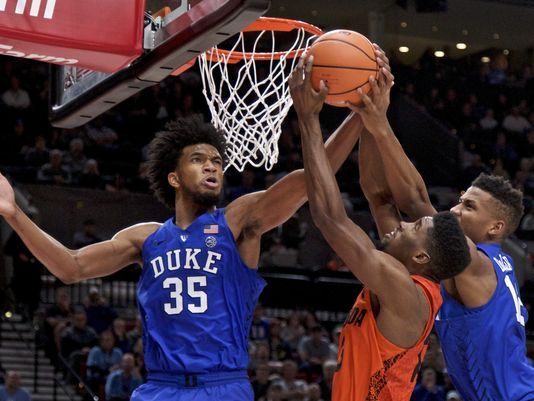 By ADAM ZAGORIA PITTSBURGH — Like virtually every other basketball fan in America, Duke freshmen Marvin Bagley III and Trevon Duval were both stunned to see No. 4 Arizona bounced out of the NCAA Tournament in the first round by No. 13 Buffalo — by 21 points, no less. A lot of people — including Charles Barkley — had Arizona making a deep run, especially with Virginia’s De’Andre Hunter out of the tournament with injury. Not only did Arizona lose, but freshman Deandre Ayton and junior Allonzo Trier declared for the NBA Draft immediately after the game. Like Ayton, the projected No. 1 pick in this year’s draft, Oklahoma freshman guard Trae Young also lost in the first round on Thursday, to Rhode Island. Young and his family said they will take a few days to decide their future plans. “Yeah, I was really shocked, I think the whole country was shocked that they went out,” Duval told me of Arizona in the Duke locker room at PPG Paints Arena. “But it’s March, so things like that happen.” The 6-foot-11 Bagley is now projected as the No. 4 pick in the Draft via ESPN.com, while the 6-3 Duval is at No. 41. Like Ayton and Young, their season could end at any time in the next three weeks. “Hopefully we don’t lose but seeing guys like that I know and have played against go out early in the tournament, it does kind of motivate me and my team to keep it going because those are really good players and they play on really good teams,” Duval said. “So for that to happen it is a motivation for us. ” Bagley agreed, but says he feels this team has what it takes to win Duke’s sixth NCAA championship and second of the one-and-done era. “Yeah, it’s tough to lose in the first round,” Bagley told me in the Duke locker room. “But I think I’m going to use that as motivation and the rest of us obviously don’t want this to end, so it’s motivation for everybody to go as long as we can. And I have a feeling that we can do that.” Duke coach Mike Krzyzewski, who has grown accustomed to recruiting and coaching one-and-done players, knows the season can end abruptly at this time of year. “One game, it’s the beauty of this tournament,” he said. “This tournament is a great, great tournament, because everybody’s got a chance. Everyone who gets in has a chance.”   **For more on Duke, read about R.J. Barrett being named Gatorade National Boys Basketball Player of the Year, and discussing the current Duke team and the star-studded 2018 recruiting class.
Follow Adam Zagoria on Twitter
And Like ZAGS on Facebook