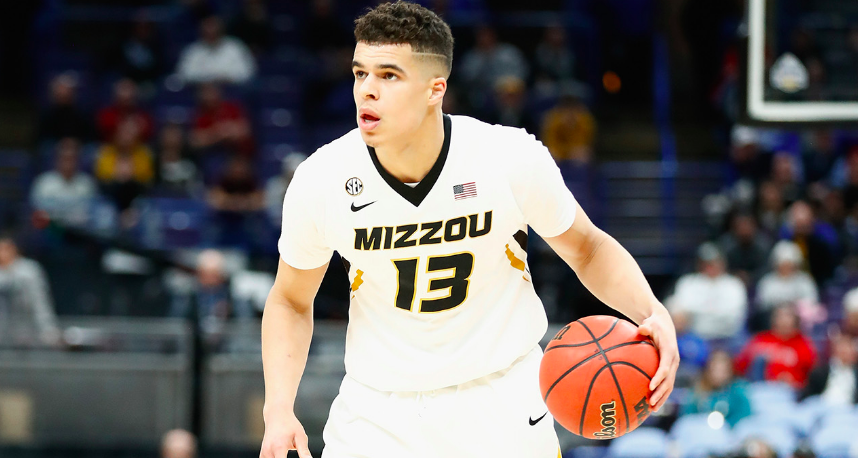 By SEAN BOCK Missouri freshman phenom Michael Porter Jr.’s first and likely only season playing college basketball ended Friday night. The 9th-seeded Tigers fell to 8th-seeded Florida State 67-54 in a West Region first-round matchup in Nashville. Porter Jr., who returned for the SEC Tournament opener after injuring himself in the season opener, finished with 16 points, 10 rebounds, and 3 steals in 28 minutes of action coming off the bench. There’s no doubt Porter Jr. is a lottery type talent as he’s projected to go 7th overall to the Dallas Mavericks in the latest ESPN NBA Mock Draft, but he didn’t seem to be too worried about the next level following the season-ending loss. “I’m not thinking about that right now,” Porter Jr. told reporters following the game. “I’m thinking about my team.” “I’ll just talk to the people close to me. I’ve got to do what’s best for me. I’ve got to get my body right, and just keep going forward step by step,” he added. Porter Jr. was a surefire consensus top-five draft pick before the injury, but his health is a concern for NBA teams. Along with Porter Jr., freshmen superstars Deandre Ayton, Trae Young, and Mo Bamba are all out of the NCAA Tournament and have big decisions to make regarding the NBA Draft in the next couple weeks. Well, Ayton seemed to have his mind made up following his team’s shocking first-round exit on Thursday. One thing is for sure, Porter Jr. wasn’t happy about the loss as he had tears in his eyes numerous times following the game.

Michael Porter Jr. exits the season in tears. “I’m not used to this feeling.” pic.twitter.com/pMWN8oSj9d

While it may seem unlikely, Porter Jr. said returning for his sophomore year is “definitely not out of the question.” The Tigers lose two of their top players, Jordan Barnett and Kassius Robertson, next year but return plenty of firepower along with Porter Jr. if he decides to come back.
Follow Sean on Twitter
Follow Adam Zagoria on Twitter
And Like ZAGS on Facebook