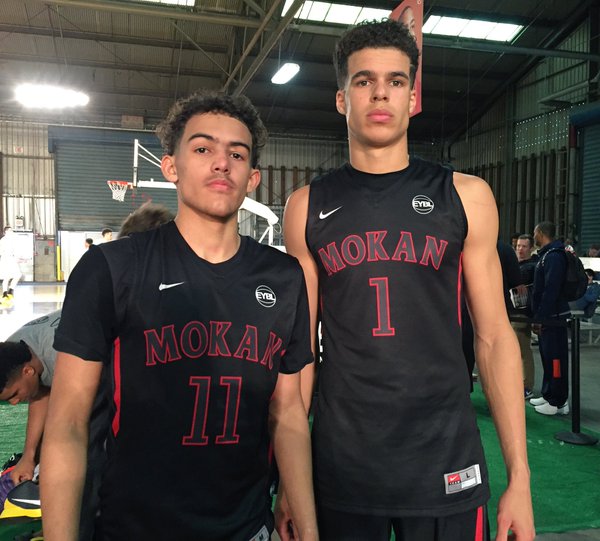 By ADAM ZAGORIA PITTSBURGH — Trae Young and Michael Porter Jr. won the Peach Jam together in the summer of 2016 with the Mokan Elite AAU team, and they have remained close friends ever since. So it only made sense that the two freshmen phenoms checked in with one another on the brink of their first — and likely only — NCAA Tournament. The 6-foot-10 Porter Jr. is projected as the No. 7 pick in the NBA Draft (to Dallas) by ESPN.com, while the 6-2 Young is projected at No. 9 (to the Knicks). The next game either player loses will be his last at the college level, so they’re both hoping to make as a deep a run as possible. “Mike is my best friend, we were joking we were hoping we got to play each other,”  Young told me in the Oklahoma locker room at PPG Paints Arena. “Mike’s a really good player and we talk about other stuff than basketball all the time.” The two old friends could only meet in the championship game since they’re on opposite sides of the bracket. Young and No. 10 Oklahoma (18-13) meet No. 7 Rhode Island (25-7) in a Midwest Region first-round game here Thursday afternoon, while Porter Jr. and No. 8 Missouri (20-12) face No. 9 Florida State (20-11) in a first-round West Region game on Friday in Nashville. So each player will be able to watch the other compete. “Oh yeah, he’s super excited, he wanted to play a long time ago,” Young said. “He just wasn’t able to. He’s a team player, I love playing with him so I know he wants to go out and compete hard for his team.” Porter Jr. just returned against Georgia in the SEC Tournament after having microdiscectomy surgery of the L3-L4 spinal discs in November. He had appeared in only two minutes in the Tigers’ opener against Iowa State on Nov. 10. Against Georgia, he shot 5-of-17 for 12 points in 23 minutes. Now he will play just his third college game — in the NCAA Tournament. “(He needs to) just play and read the defense,” Mizzou coach Cuonzo Martin told reporters. “Our job is to put him in position. His job is to take advantage of the situations — and not so much making a lot of dribble moves unless you’re attacking the rim, but catch-and-shoot, (make) straight line drives (to the rim) and post up.” While Porter barely played this season, Young was the early favorite for National Player of the Year awards before Oklahoma faded in the second half of the season, failing to win a road game after Jan. 1. Still, he averaged 27.4 points and 8.8 assists and is a finalist for the Naismith Award. “You know, Trae Young, he really has no weakness in his game” Rhode Island coach Dan Hurley said. “He can score at every level obviously, with amazing range on his perimeter shot. He can pass the ball with either hand at ridiculous angles. He has the ball in his hands, it has to be over 90 percent of the time, you know, 90, maybe even 95 percent. “So he’s just constantly attacking. So he has every requisite skill and you just try to make things as hard for him as you possibly can in a ball screen defense. And when he’s playing in isolation and when he’s coming at you in transition, you just try and show him as many different looks as you can, too, during the course of the game, because he adjusts so quickly to what he sees on the court, but he also has the mind for the game, too.” Oklahoma has taken a lot of heat for even making the tournament off the bubble, especially since in-state rival Oklahoma State was left out. “We see everything,” Young said. “We’re good at blocking things out. We’ve been good this week on just focusing on Rhode Island. They’re a very good team. Got a lot of respect for them. So we got to be ready to play. But, I mean, we do play with a chip on our shoulder, especially as of late, we haven’t been playing very good. “But like I said, we all sat down, we made sure and let everybody know this is a new season, so it’s 0-0, and it’s a new breath of fresh air. We got to come out and play and be ready.” NBA personnel will be keeping an eye on both guys in the NCAAs, but they think Young may face more pressure because 1) nobody expected Porter Jr. to play this season; and 2) Oklahoma is under the microscope for even making the Big Dance. “Porter probably gets a pass,” one NBA scout said. “If anything, playing makes him look more like a winner for trying when most would have sat. “As for Trae, scouts are probably eyeing his defense but I think most people now accept he is too keyed in on because of his lack of teammates. He could help his stock defensively if he tries.” Now facing their first — and last — NCAA Tournaments, the two old friends will be watching, and rooting for, each other. “Me and Mike talk all the time,” Young said. “I’m looking forward to seeing him play against Florida State. I mean, he’s going to do some big things so I’m excited for him.”
Follow Adam Zagoria on Twitter
And Like ZAGS on Facebook