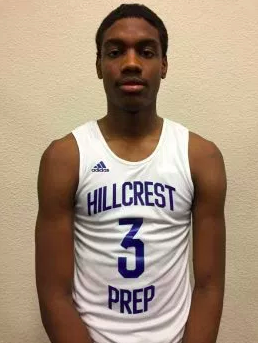 By SEAN BOCK Demarius Jacobs, the 6-foot-2 point guard from Hillcrest Hoops (AZ), has committed to St. Louis, he announced on Sunday. “He went on his official visit there, loved the staff there, and he thought it was the best place for him,” Hillcrest head coach, Nick Weaver, told 247. Jacobs is the fourth member of the Billiken’s 2018 recruiting class along with four-star power forward Carte’Are Gordan, three-star shooting guard Fred Thatch, and small forward Mickey Pearson. “He just had a really good relationship with their staff,” Weaver added. “I think at the end of the day they had been recruiting him for the past year and a half. He just had a really good relationship with them and felt good about them.” Jacobs, a Chicago native, was planning to visit Illinois this upcoming week but canceled. The Illini originally seemed to be the heavy favorite for Jacobs. Western Kentucky was also in the mix. “He’s a dynamic, elite athlete that can handle it and get to the basket and play above the rim,” Weaver told 247Sports. “He’s going to be really good in the league.” Jacobs, a former Southern Illinois commit, is the older brother of 2019 Kansas commit Markese Jacobs. According to 247Sports, Jacobs is a three-star prospect and the No. 3 player from the state of Arizona.