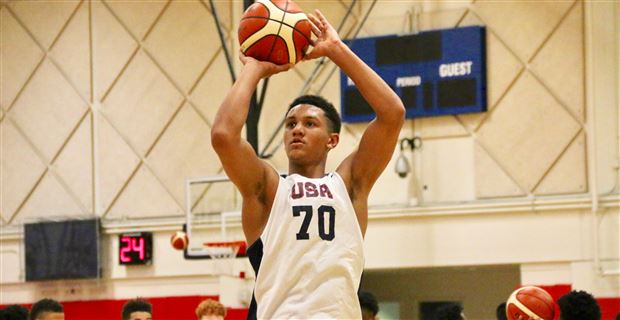 By JACOB POLACHECK Jalen Suggs, the 6-foot-4 point guard from Minnehaha (MN) Academy, told ZAGSBLOG on Monday that Iowa is the school working the hardest for his recruitment. “Easily, it would have to be Iowa,” said Suggs. “Their assistant coach, [Andrew] Francis, has been up here all the time. He has been to football practices, a couple games, a couple practices, and I’ve really built a great relationship with him. I’m definitely in a good spot with him and the whole coaching staff down at Iowa. So, they’ve been recruiting me the hardest, easily.” Suggs also took an unofficial visit to Iowa last year (Nov. 4). He spoke with ZAGSBLOG about the visit. “I loved it. The atmosphere there is great. They always pack the stands. For the football game, it was obviously a huge win over Ohio State. There wasn’t a seat in that stadium that wasn’t filled. I also loved the waves that they did to the kids in the hospital. Down at Iowa, it just feels like a big family to me. All the fans are supportive. They really believe in their team.” Suggs also said Monday that he is working on planning unofficial visits to Kansas, Duke, and Kentucky

“Nothing planned right now, but I have a couple schools that I would like to go see,” said Suggs. “I’d like to visit Kansas, Duke, and Kentucky sometime soon.”

He broke down all three schools:

Kansas: “I like their play style. All their point guards are the leaders of the team. Whenever the shot clock is running down, the ball always seems to be in their hand. I’m a guy that likes to run the pick-and-roll and that’s what they like to do as well. I like the scheme that they run and the way that they like to play up and down.”

Duke: “It’s a great school athletically and academically. Coach [Mike Krzyzewski] is a great coach and they’ve always got a good influx of players coming in. They have a great coaching staff and I enjoy their play style as well, with the pick and roll.” Kentucky: “Coach [John] Calipari is a great coach. I love the way that they get guys ready for the NBA. That’s Coach Cal’s main focus. Something that Kentucky has in common with Duke and Kansas is that they like to get up the floor, run the pick-and-roll, and get the ball in the scorer’s hands.” Despite being ranked as the No. 4 overall basketball player in the Class of 2020 by 247Sports, Suggs is also being recruited for football as a high-major quarterback. “Right now, I’m sitting with offers from Iowa and Iowa State, but I’m getting interested from Rutgers, Notre Dame, and Northwestern,” said Suggs. “Northwestern was recently at my school a couple weeks ago. Iowa also recruits me the hardest for football, as in basketball.” As a sophomore, Suggs is still unsure of whether he will play football at the next level, as he said, “That will be a decision that I will make after sitting down and talking with my parents and my coaches. Right now, I’m just trying to play both of them to the best of my abilities and have fun with it.” Suggs says he will continue to play football this fall for his high school team. Follow Jacob on Twitter Follow Adam Zagoria on Twitter