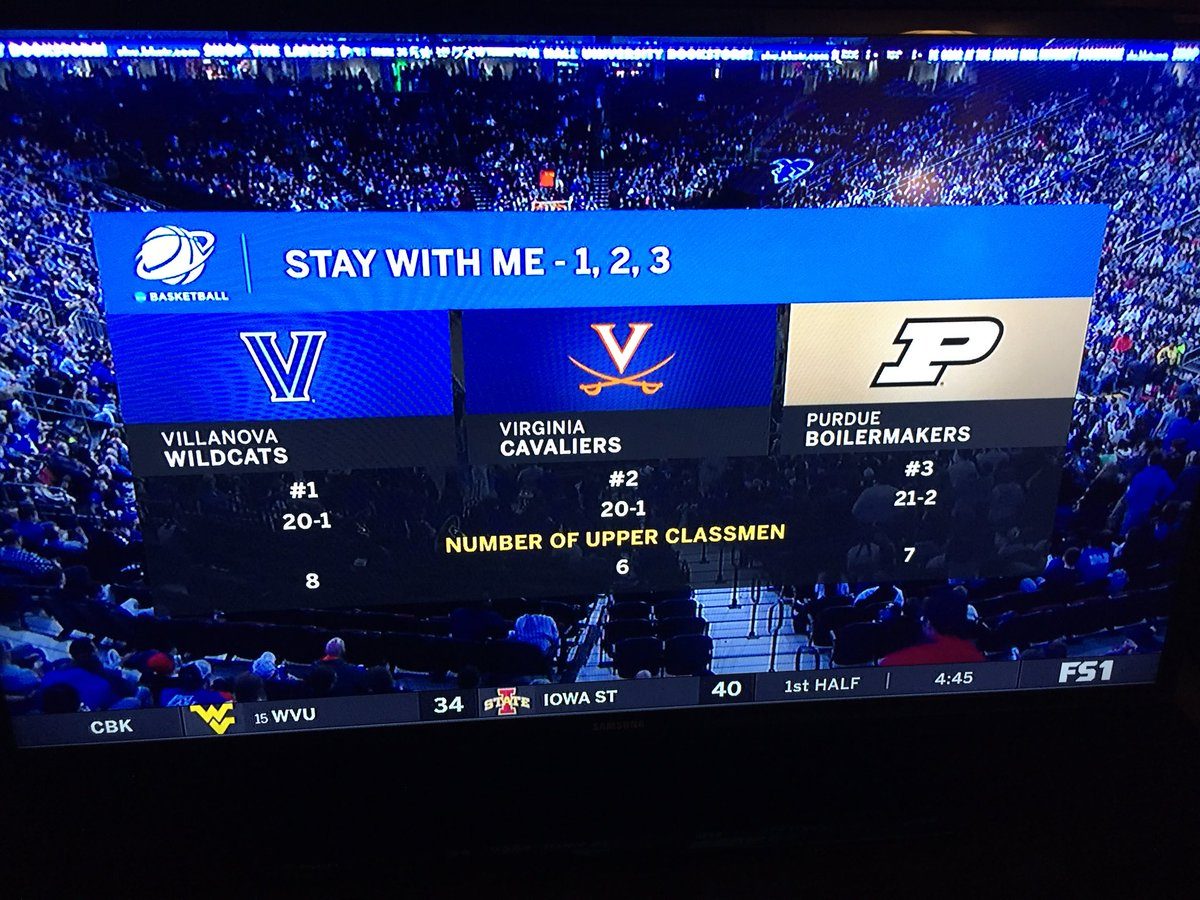 By ADAM ZAGORIA For all the talk about one-and-dones in college basketball, it’s time to recognize this simple fact: the three best teams in the nation don’t have a single one-and-done player. Seth Greenberg must be kvelling. No. 1 Villanova, No. 2 Virginia and No. 3 Purdue are now a combined 64-4 on the season — and they don’t have a single one-and-done player between them. Villanova (21-1) sits atop the Big East at 8-1. Virginia (21-1), winner of 13 in a row, is the only unbeaten team in the ACC at 10-0. And Purdue (22-2) has won 18 in a row and is now 11-0 in the Big Ten. The three teams have a combined 21 upperclassmen, courtesy of this FoxSports1 graphic.

The top 3 teams don’t have a single one-and-done between them. pic.twitter.com/e4Kuh4q39r

Between them, the three teams have one projected first-round draft pick per ESPN — Villanova junior Mikal Bridges at No. 11. Virginia doesn’t have a single player projected in the 2018 mock, while Villanova’s Jalen Brunson and Purdue’s Vincent Edwards, Isaac Haas and Dakota Mathias are all projected second-rounders. Would it surprise anyone at this point if we saw one, two or three of these teams at the Final Four in San Antonio in late March? Or if one of them was cutting down the nets on April 2? No, it wouldn’t. This update comes about two weeks after Kentucky coach John Calipari called out his freshman-dominated team for its “unwarranted arrogance” and ESPN’s Greenberg went off in defense of the none one-and-done teams. “To me, it’s a bigger problem,” Greenberg said then. “We spend all our time talking about the freshmen, DeAndre Ayton, Marvin Bagley, the great Kentucky freshmen, instead of talking about the best teams. These guys are not the best teams. Why don’t we spend some time talking about the Villanovas, the Purdues, what Virginia’s doing? These guys are spoiled by the process by the time they’re 13 years old. And they’re clueless in understanding how hard you have to play, what type of teammate you have to be….They’re not connected because they’re all about themselves instead of the good of the group.” OK, so the media, including ESPN, has a weakness for one-and-dones and the allure of the next great star. Let us not forget that Oklahoma’s Trae Young and Duke’s Bagley III, both freshman, are among the leading contenders for the Wooden and Naismith awards. And what they’re doing this season is straight out fantastic. But Brunson and the Purdue group of Vincent Edwards, Carsen Edwards, Haas and Mathias are having tremendous seasons, too. So is Texas Tech senior Keenan Evans, by the way. For our money, an ideal Final Four would include some mix of the above teams plus at least one team with some freshmen phenoms — Duke would seem the best bet at this point, although Arizona and Kentucky remain contenders too. Stay tuned, but at this stage the teams dominated by upperclassmen are the class of college basketball. Seth Greenberg must be kvelling.
Follow Adam Zagoria on Twitter
And Like ZAGS on Facebook

No. 2 Virginia remains unbeaten in ACC with win over Louisville