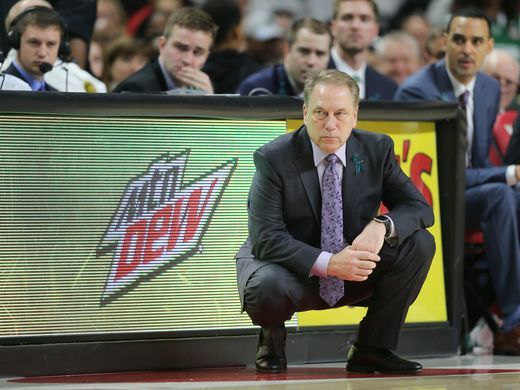 By MIKE McCURRY Michigan State is no stranger to adversity of late. Off the court, in the wake of the Larry Nassar sexual abuse scandal, school president Lou Anna Simon and athletic director Mark Hollis have already stepped down. Head men’s basketball coach Tom Izzo, who acknowledged he has no plans to follow suit, has been linked to the allegations as well. On the court, the No. 6 Spartans have played an uneven brand of hoops over the last three weeks—at times looking like the legitimate national title contender we all expected them to be, and at times looking no better than the third or fourth best team in the Big Ten. That inconsistency bled into Sunday, when Michigan State trailed a desperate Maryland squad by 13 at the half. Michigan State would rally, though, utilizing Cassius Winston’s strong second half and a decisive advantage on the glass to hold off Maryland, 74-68, in College Park. “Well I got a lot of pride in those guys, and I think they were playing for a lot of people today,” Izzo said afterward. “My heart still goes out for the survivors, and I think we showed that we’re going to try and be part of the healing process.” “I just hope that everybody rallies behind this team a little bit, and I hope we all rally behind the survivors and make our community a better place,” the Hall-of-Fame coach added. Winston, who posted a scoreless first half with just 1 assist, 3 turnovers, and 2 fouls in 5 minutes, rebounded in the latter frame to the tune of 13 points and 4 assists without committing a single turnover. He was lethal in pick-and-roll situations, getting into the teeth of the defense before dropping it off to a big and also drilling two triples. The Spartans fed off their point guard’s flip of the script. Michigan State shot 53 percent in the second half while turning the ball over just twice, compared to a 27 percent clip and eight turnovers in the opening frame. Joshua Langford added 19 points. Miles Bridges poured in 11 points and 9 rebounds but shot just 3-of-13 from the floor.

WHAT A FINISH! @MSU_Basketball's Joshua Langford with the sweet reverse… pic.twitter.com/r0r05T89Ep

Despite Jaren Jackson Jr. (12 points, 8 rebounds, 4 blocks) being limited to 20 minutes due to foul trouble, he and Nick Ward (7 points, 12 rebounds—8 on the offensive end) helped the Spartans achieve a 16-7 advantage in second-chance points via 19 offensive boards. With all the negativity and distractions swirling around the program right now, Michigan State deserves credit for being able to refocus in-game and emerge with a quality win on the road.

Izzo on being emotional after the game: "It's been hard to focus on basketball because when I do, I feel guilty." Says he's proud of team.

Chalk this up as another squandered opportunity for Maryland, whose lone Top-50 RPI win remains a home victory over Butler back in November. With the Big Ten as down as it is this season, Maryland—which entering Thursday’s action was ESPN bracketologist Joe Lunardi’s second team out of the field—faces a near must-win on Wednesday at Purdue. Good luck with that, Kevin Huerter, Anthony Cowan, and company. Photo: USA TODAY Sports Follow Mike on Twitter Follow Adam Zagoria on Twitter And like ZAGS on Facebook