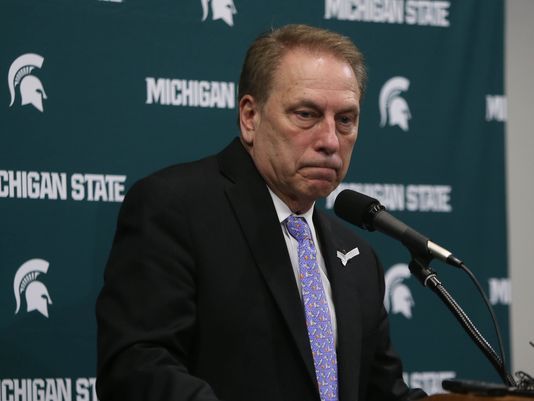 In the wake of his team’s win over Wisconsin Friday night, a defiant Tom Izzo said he had no plans to retire as the Michigan State scandal seems to widen on a daily basis. “I’m not going anywhere, in my mind,” Izzo told reporters. “I’m definitely not retiring.” Izzo, who has won one NCAA championship and has the team to contend for another this year, added: “There is nothing I’m going to say right now after a game in a press conference except that I support the survivors to the nth degree.” Asked if he was concerned about the future of the University and his team, Izzo added: “No. I’m concerned about the healing process. And I want to be a big part about helping it heal.” Izzo and Michigan State football coach Mark DAntonio have been linked to the Larry Nassar scandal via an explosive ESPN report that says the University engaged in a pattern of “denial, inaction and information suppression of allegations by officials ranging from campus police to the Spartan athletic department.” Dantonio also said Friday reports of him stepping down were false. The scandal has already taken down University President Lou Ann Simon and athletic director Mark Hollis.  Meantime, The Athletic later Friday published a report showing that NCAA President Mark Emmert was made aware of 37 reports of sexual assault at Michigan State in 2010, including former basketball players Keith Appling and Adreian Payne. Travis Walton, a former grad assistant under Izzo, on Friday was placed on administrative leave by the Los Angeles Clippers G League team after he was also linked to the scandal. “What I really got from the experience with Mark Emmert was, that governing body governs him,” Kathy Redmond, the founder of the National Coalition Against Violent Athletes, told The Athletic. “He met with me, which was great and I appreciated that. But the governing board has an awful lot of power. … It’s a strange setup. You do kind of get the fox guarding the hen house mentality. You do feel like the NCAA doesn’t like to do investigations because they like their relationships (with university officials and conferences). I think Mark Emmert came in with the right tone but quickly realized, ‘There’s not a lot I can do here.’ ” Photo: Kirthmon F. Dozier, Detroit Free Press Follow Adam Zagoria on Twitter And Like ZAGS on Facebook