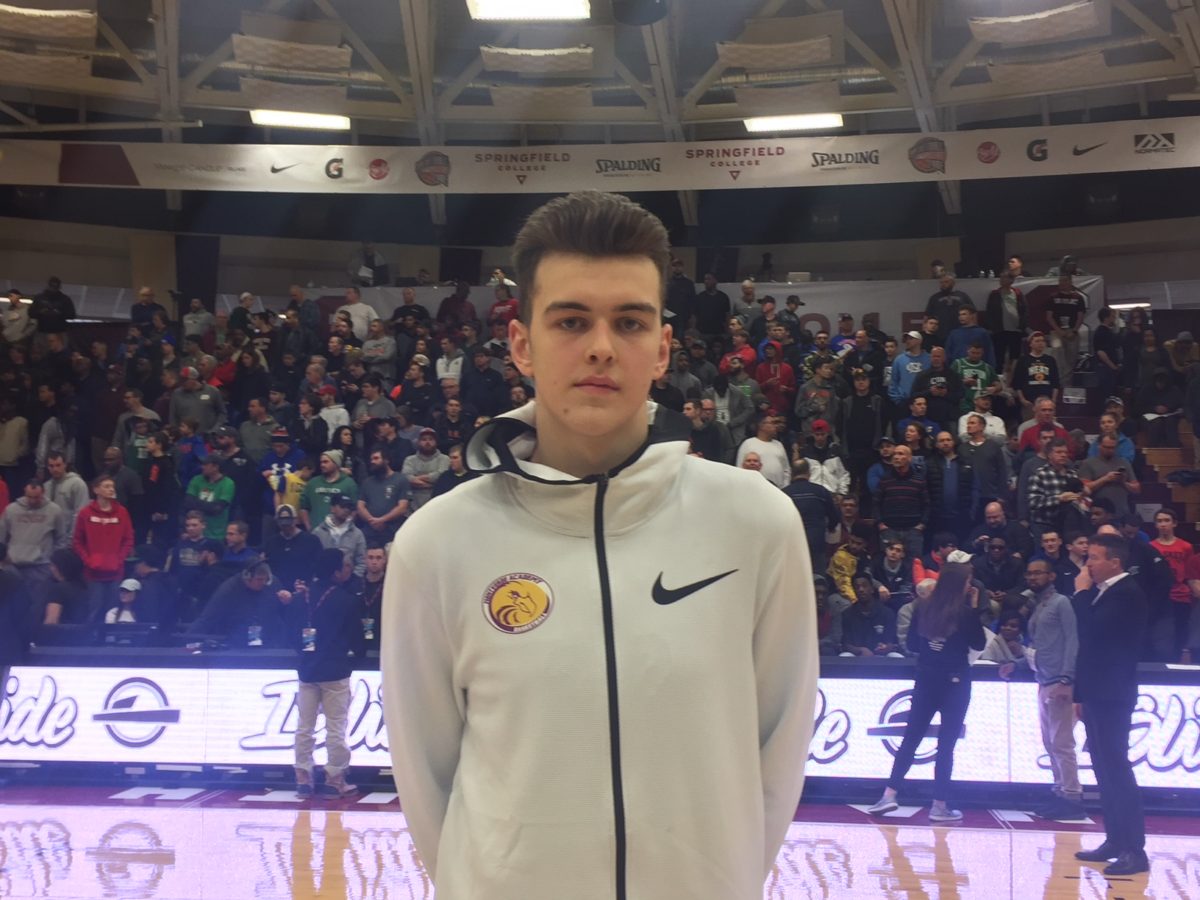 By JOSH NEWMAN SPRINGFIELD, Mass. – Montverde Academy is unlike anywhere else on the current high school landscape. Already resembling the United Nations with the makeup of its roster, already possessing five Division I commits from the class of 2018 – including potential future No. 1 overall pick R.J. Barrett — and another two in 2019, now comes this. Meet Balsa Koprivica, a 7-foot-1, 240-pound Serbian-born big man. Koprivica is new to Montverde after transferring in from nearby Windermere (Flor.) Prep in the middle of the season. There is an adjustment period ongoing, so his best was not on display Monday at the HoopHall Classic, but no one seems too worried about that. “He’s one of those guys with great feet, great hands,” longtime Kevin Boyle assistant Rae Miller told ZAGSBLOG. “He runs well, and has great room for physical development. He shoots the ball well, puts the ball on the floor, very skilled for a big kid, and is a kid that anything around the rim, he can finish above and through people. “As he gets stronger, and a little bit more physical, he’s going to become very, very good around the basket.”

Koprivica is still adjusting to playing on a loaded team, but Boyle said he considers him a future “pro.” Boyle would know, having coaches the likes of Kyrie Irving, Ben Simmons, Joel Embiid, D’Angelo Russell and Michael Kidd-Gilchrist, among others. “Coach Boyle has been getting me ready on the court, off the court, so I’m just trying to get in the groove with the team,” Koprivica told ZAGSBLOG. “I’m still learning the plays a little bit, the chemistry, but in a few weeks, I feel like I’ll be ready to go fully.” Koprivica is not a new name on the scene, but he is something of an enigma. Rated a five-star recruit and the No. 14 overall prospect in 2019 by 247 Sports, Koprivica began his career at University School in Fort Lauderdale, then transferred to Windermere. Koprivica and Montverde teammate Filip Petrusev were part of the Serbian national team that won gold last summer at the FIBA Europe Under-18 Championships, but he first came to be known at a Nike EYBL stop at the 15-and-under level two summers ago. “He’s got to work his way back in the rotation, and I’m not so sure they don’t play too athletic of a game for him,” New York City-based recruiting guru Tom Konchalski said. “I thought he was very skilled (two years ago at the EYBL stop), but he has to get stronger, he has to get tougher, but I thought he could be terrific. “He’s starting at square one again, especially with so many incumbent guys there at Montverde. If he has the patience to stay there two years with Kevin Boyle, he is certainly going to improve exponentially. Boyle is such a good developer of players.” Added Miller: “I think he’s more for Marc Gasol, that kind of guy that doesn’t play as much on the perimeter like (Knicks star Kristaps) Porzingis does. I think that will be a better comparison for him over the long haul.” Said Koprivica: “I like watching a lot of bigs, but from where I’m from, the main guy is Porzingis. I try to look at all these players, but I watch Porzingis the most.”

Koprivica says Baylor and Florida State are the main schools recruiting him right now. His suitors figure to multiply as he plays more, and as the players involved in the FBI corruption scandal to continue to move away from it. Brad Augustine, Koprivica’s Adidas-sponsored AAU program, 1Family, and agent Christian Dawkins were arrested in connection with the FBI case. The federal complaint stated that plans were being made to funnel $150,000 in Adidas money to ensure that Koprivica attended Louisville. Koprivica was being held out of games at Windermere, but is clear to play at Montverde. “Most of the stuff that has gone on with his name, people are trying to find out what exactly has happened and where it is going,” Miller said. “As you can see, just about everyone that has been involved in those reports, they have all continued to play and their recruiting has taken off. I expect the same thing to happen for him.” MONTVERDE’S KEVIN ZHANG TALKS OFFERS The Montverde Academy post-graduate team, coached by Kevin Boyle Jr, erased a six-point deficit midway through the second half to defeat MacDuffie School, 62-57, Saturday night at the HoopHall Classic. Uncommitted three-star shooting guard Jermaine Couisnard finished with a game-high 17 points to go along with seven rebounds and five assists. Uncommitted three-star small forward Kevin Zhang added 14 points on 6-for-12 shooting. Zhang, considered by some to be the best Chinese basketball prospect in the United States, spent last season at Dick’s Nationals winner La Lumiere (IN), which beat Montverde Academy’s main team in the championship game. “I got offers from UCLA, Pittsburgh, Western Kentucky and DePaul,” Zhang said. “I will visit UCLA and Pittsburgh soon.” As for UCLA, he said, “Nice weather. I like the way they play.” He added: “The coach really talks to me a lot.” Zhang got to return home to China in December when Montverde won an event there. “My teammates got to learn a lot about Chinese culture,” he said, adding that family and friends “came to my game.” Follow Josh Newman on Twitter
And Like ZAGS on Facebook

ACC leader Virginia up to No. 2 in AP Top 25; Purdue rises to No. 3 as Villanova stays at top