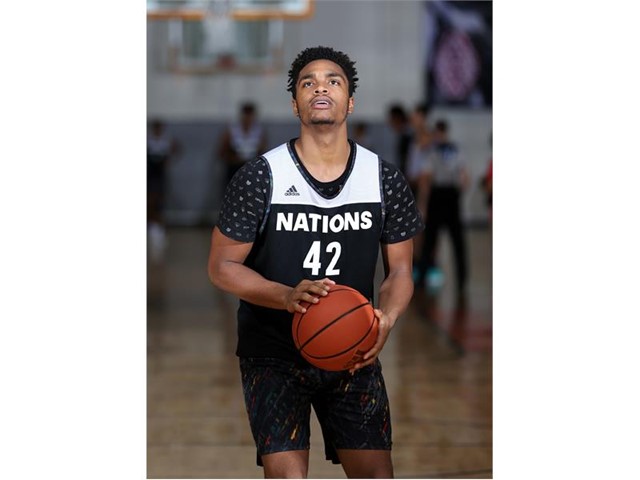 By ADAM ZAGORIA SPRINGFIELD, Mass. — Sherif Kenney, the 6-foot-4, 217-pound Class of 2019 point guard from Brewster (N.H.) Academy, remains open in his recruitment but says several schools have caught his attention so far. After leading Brewster to a 101-57 rout of Cushing (MA) Academy, Kenney listed UConn, Arizona State, Minnesota, Rutgers, West Virginia and Kansas State among those coming after him. UConn assistant Raphael Chillious was on hand to watch Kenney and UConn signee Lukas Kisunas. “I’ve got to go take my visit to really see what they’re doing,” Kenney said of the Huskies. Kenney has drawn comparisons to former UConn point guard Khalid El-Amin, but isn’t too familiar with him. “Yeah, they always tell me I play like him,'” he said. “But I’ve never seen him play.”

As for UConn’s message, “They just want me to come in and see how they run their offense.” Kenney also listed Rutgers. “They want me to come see what they’re doing,” he said. “Same thing as everybody else.” Kenney and Brewster coach Jason Smith want him to cut his weight heading to college. “Sherif moves really well for someone his size and once he gets his shoulders past you, he uses his body well to get to the rim, he’s more explosive than people realize,” Smith said. “He’s just go to continue to fine tune his frame and be disciplined with his diet and nutrition.”
Follow Adam Zagoria on Twitter
And Like ZAGS on Facebook