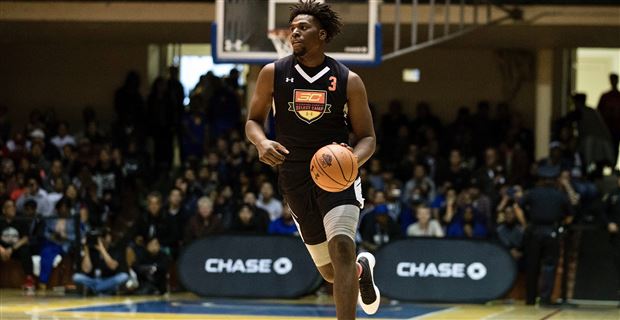 By ADAM ZAGORIA UNION, N.J. — Naz Reid is headed to LSU next fall, but his stay on campus could be short. The LSU staff is preparing for the newly-minted 6-foot-11, 245-pound McDonald’s All-American from Asbury Park, N.J., and Roselle Catholic to be a one-and-done. “That is our plan, our plan is to work with him daily to make that happen,” LSU assistant Greg Heiar said in a phone interview. “We’re all in agreement that if he works and does what he’s supposed to do, then that should be the plan. But if not, he’ll come back for his second year. Our goal is to work with him every single day to make him the best that he can be to make that a reality.” NBADraft.net currently projects Reid as the No. 14 pick in the 2019 NBA Draft, while ESPN.com does not have him on its 2019 mock. LSU’s last one-and-done was, of course, Ben Simmons, now among the favorites for NBA Rookie of the Year honors with the Philadelphia 76ers. Asked if it was fair to compare Reid with Simmons, Heiar said: “I would say that they’re both going to LSU. I think Naz is a little bigger. His ability to shoot the ball coming in the door is on a different level. I think they’re different players.” Reid committed to LSU in September and then signed in November. During the recruiting process, Heiar said they compared Reid to Chris Webber, Draymond Green and Kevin Durant. “He’s not that level yet but he’s got that size, he’s got that athleticism, he’s got that mind to him,” Heiar said. “That was kind of our point when we were recrutinig him, emphasizing his versatility and ways that other NBA all-stars have been used in college.”

#LSU commit @NazReid of @rc_basketball is a unique talent and one of the best players in his class. Thanks again to @NJHoopRecruit for help with the video. https://t.co/2gF7jXW8DE

For the time being, Reid is entering the final few months of his high school career, where his Roselle Catholic team (7-1) is ranked No. 1 in New Jersey by NJ.com. On Sunday, Reid went for 16 points, 15 rebounds, 3 assists and 7 turnovers as the Lions held off a tough local rival, St. Mary’s, 64-59, in overtime in the SFIC Basketball Festival at Kean. During the game, Reid flashed his vast skill set. He brought the ball up court at times, he ran the floor, he shot the three-pointer (going 0-for-5) and he dominated in the paint with dunks at times. For a big man, Reid has a good handle and Roselle Catholic head coach Dave Boff isn’t afraid to let him bring the ball up court or get in the pick-and-roll. “I just have to work on my handle and my perimeter skills in the gym every day,” Reid said. Boff said LSU is getting a player with a “unique skill set with the fact that he can play on the perimeter and in the post.” “What he’s been doing recently has been going back to his bread and butter, which is going down the post and dominating down there,” Boff said. “[He had] 16 rebounds [Sunday]. I don’t know how many offensive but I know he scored on three consecutive offensive rebound put backs. And I think he’s at his best when he establishes himself in the post and then uses that to step out and showcase his perimeter stuff.” Heiar said LSU plans to use Reid as a point-forward type, utilizing his vast skill set. “He is different than any other player I’ve ever coached, that’s for sure,” Heiar said. “We plan on using him all over the court, on the perimeter, let him defensive rebound and push the ball and make decisions with the ball. And play inside and out, just depending on his matchup, if he needs to take him inside or take him outside. He can set ball screens and he can come off ball screens. You can run him in isolation situations, and you can run offense through him for others. He’s also a playmaker for others, not just for himself, and he’s got a beautiful basketball mind.” In addition to his basketball mind, Reid also has a monster frame. He’s currently at about 245 pounds but wants to get to 260 “but more muscle” in college. One of the main jobs of the LSU staff, including strength and conditioning coach Greg Goldin, will be to maximize Reid’s frame and get him in the best shape possible. “I think that was one of the things that really stood out to him when he met with our strength and conditioning coach, Coach Goldin,” Heiar said. “He’s 29 years old. He’s high-energy, high-intensity and he’s tremendous, and he laid out a great plan for Naz from the day he got here to the possible one-and-done day that he left and Naz really bought into that and believed in it. “His whole body has got to get stronger, he’s got to get lower. We’ve got tp continue to improve his foot speed and just tighten him up and continue to help him become a quicker twitch athlete and continue to get him in phenomenal shape. That’s the final piece to the process for him to be one-and-done is getting him in phenomenal shape.” Reid is part of a Tigers’ recruiting class that also includes local product Ja’Vonte Smart of Scotlandville Magnet High in Baton Rouge, La., and Darius Days of IMG Academy in Sarasota, Fla. The Tigers remain in the mix for power forward Emmitt Williams of Oak Ridge (FL), who is down to LSU, Florida and Oregon. Before he heads to college, however, Reid has unfinished business at Roselle Catholic. He already won a New Jersey Tournament of Champions title as a freshman in 2015 alongside former Kentucky guard Isaiah Briscoe. But he has never captured a Union County Tournament title. “Union County is the best county in New Jersey, the toughest county,” Reid said. “And I feel with the potential we have, and the talent we have, we can come out on top.” If Roselle Catholic is to win a county title and then emerge from the brutal Non-Public North B state tournament bracket that also includes the likes of Hudson Catholic, Montclair Immaculate, The Patrick School and Gill St. Bernard’s, Reid will have to be a dominant force in February and March. “Yeah, he absolutely can [lead us there] and that’s what we’re counting on,” Boff said. “He’s got to continue to do the things he’s done over the last four or five games. He’s been tremendous with the way he’s been playing, consistency with his energy and limiting the turnovers. He’s, I think, hand’s down the best player in the state.” New Jersey has produced a slew of top NBA Draft picks in recent years, from Kyrie Irving to Michael Kidd-Gilchrist to Karl-Anthony Towns. If he works hard during the next year, Reid could lead the next wave from the Garden State. Photo: Kelly Kline/Under Armour
Follow Adam Zagoria on Twitter
And Like ZAGS on Facebook