No. 21 Xavier downs No. 11 Cincinnati – Three Takeaways from the ‘Crosstown Shootout’ 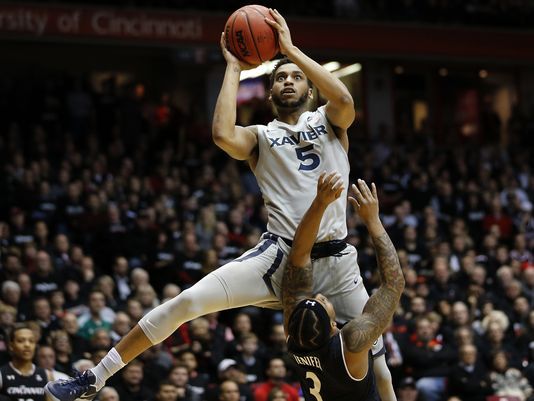 Chris Mack and No. 21 Xavier downed cross-town rival Cincinnati, 89-76, in the Crosstown Shootout on Saturday afternoon at the Cintas Center. The Musketeers (7-1) avenged last year’s 86-78 loss at Fifth Third Arena and have now won the last seven home meetings against the Bearcats. Xavier has also won 8 of the 11 Crosstown Shootouts. It was also Xavier’s 35th straight non-conference win at the Cintas Center. After the game, Cincinnati coach Mick Cronin appeared to go after Xavier’s JP Macura in the handshake line. (Read about that here.) Trevon Bluiett went for 28 points, making 5-of-10 three-point attempts. Kerem Kanter, brother of Knicks center Enes Kanter, was strong inside with 17 points, 3 rebounds and 2 blocks. And point guard Quentin Goodin notched 10 points, 8 assists and 5 rebounds with 6 turnovers. Kaiser Gates tallied a double-double of 10 points and 11 boards. Jacob Evans led Cincinnati (7-1) with 23 points, Cane Broome had 16,  Jarron Cumberland 15 and Gary Clark scored 14 points with 7 rebounds. Here are three takeaways from the game: Cincinnati got exposed after not playing anybody  Despite being ranked No. 11 in the nation heading into the game, the Bearcats simply hadn’t played anybody yet. Cincinnati’s seven wins came against Savannah State, Western Carolina, Coppin State, Buffalo, Richmond, Wyoming and Alabama State. Xavier, by contrast, had compiled a 6-1 record including wins over Wisconsin and then-No. 16 Baylor, with a 16-point loss to Arizona State in which Tra Holder went off for 40 points. It won’t get easier for Mick Cronin’s crew, either. The Bearcats face No. 6 Florida next Saturday and then host Mississippi State and visit UCLA. Xavier, by contrast, should be able to pile up wins heading into the Big East schedule. The Musketeers now host Kent State, Colorado, East Tennessee State and Marshall before visiting Northern Iowa. They open Big East play at Marquette Dec. 27.

Enes isn’t the only Kanter worth paying attention to Enes Kanter has made quite a few headlines already this season, from saying that his games aren’t shown in his native Turkey to calling out LeBron last month — “He can call himself King, Queen, Princess, whatever, he’s not going to punk us..

But his younger brother Kerem is proving that Enes isn’t the only Kanter worth paying attention to. The 6-foot-10 Kerem entered averaging 6.6 points and 3.0 rebounds and came up with 17 points, 3 rebounds and 2 blocks against Cincinnati. He was also 2-for-2 from deep.   Trevon Bluiett will be in the mix for Big East Player of the Year honors Jalen Brunson of Villanova was the Preseason Big East Player of the Year and the unbeaten Wildcats are No. 5 in the nation. But Bluiett figures to give Brunson a run for his money for the end-of-the-year award. After going for 40 on Cincinnati a year ago, Bluiett went for 28 points in the win on Saturday. The 6-6 senior entered the game averaging 19.7 points, 6.1 rebounds and 3.3 assists while shooting 54 percent from the field.   Photo: The Enquirer/Kareem Elgazzar Follow Adam Zagoria on Twitter And Like ZAGS on Facebook

No. 21 Xavier Bounces Back Defensively in Triumph Over No. 16 Baylor