No. 21 Xavier Bounces Back Defensively in Triumph Over No. 16 Baylor | Zagsblog
Follow @adamzagoria

No. 21 Xavier Bounces Back Defensively in Triumph Over No. 16 Baylor 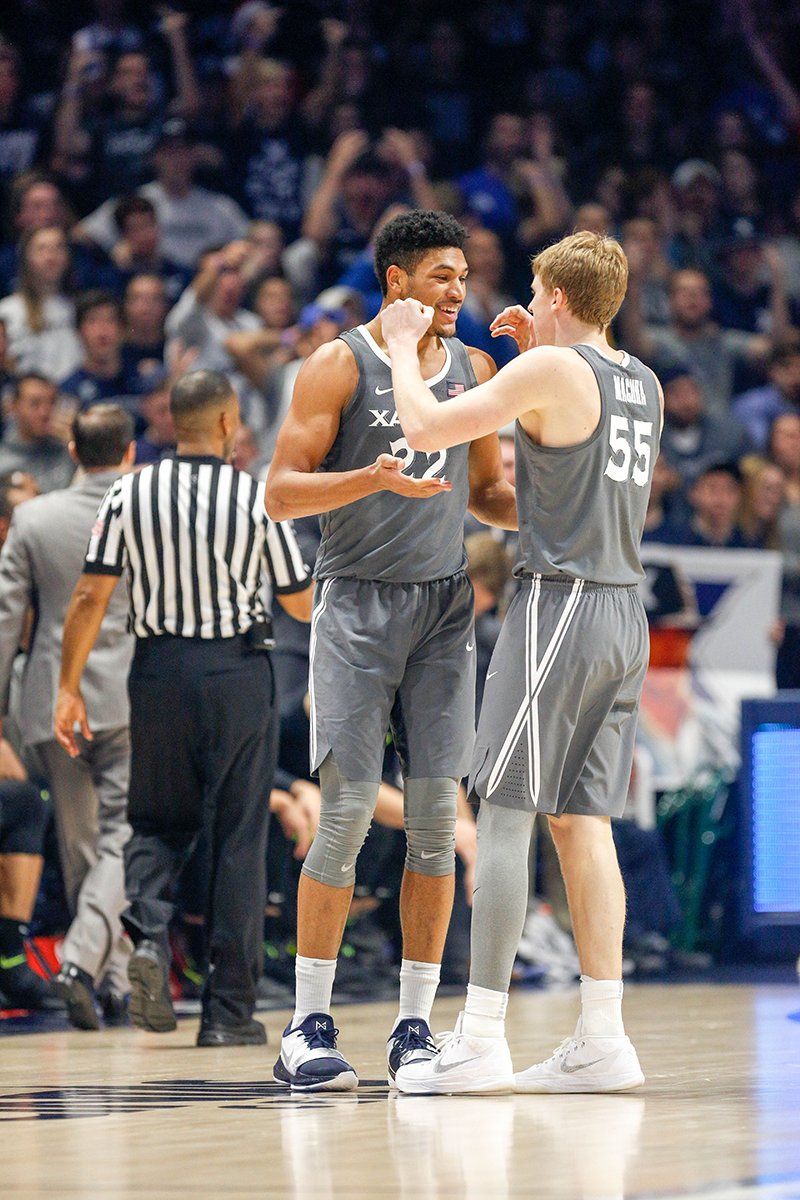 By MIKE McCURRY After Xavier was lit up by Arizona State in Las Vegas to the tune of 102 points, the Musketeers had precious little time—just four days to be exact—to regroup defensively in preparation for a pair of marquee opponents this week. Whatever points Chris Mack emphasized over the last few practices definitely got through to his team, at least on Tuesday, as No. 21 Xavier bounced back via a 76-63 win over Baylor. Xavier had no answer for Arizona State’s four-guard lineup on Friday. Tra Holder put up a 40-spot. The Sun Devils made 63 percent of their twos, 48 percent of their threes, and hung a 139.9 adjusted offensive efficiency rating on Xavier—its highest single-game mark allowed since December 31, 2015 versus Villanova. With two top-20 opponents visiting this week in No. 16 Baylor and No. 11 Cincinnati, Xavier had no choice but to urgently rededicate itself to the defensive side of the floor. One down, one to go on that front for Xavier, which used a 12-0 run early in the second half propelled by six points from freshman Naji Marshall and four Baylor turnovers to take control of the game. Baylor presented a different challenge for Xavier than Arizona State. ASU likes to play small-ball at a frenetic pace and shoot lots of threes. Baylor, on the other hand, prefers to slow the game down, attack the offensive glass and let Manu Lecomte make plays and take a large percentage of the Bears’ shots from behind the arc. Xavier gang-rebounded on Tuesday, allowing just eight offensive boards while outscoring Baylor in second-chance points, 12-10. And Lecomte, who was probably chomping at the bit after seeing how Holder had his way with Xavier on Friday, was held to 11 points on 4-of-13 shooting. Aside from a strong defensive showing, Xavier can take solace in winning comfortably despite a season-low 10 points from Trevon Bluiett, who was shadowed by Mark Vital all night long and also missed some uncontested three-pointers that he usually knocks down. Stepping up in place of Bluiett was J.P. Macura, who scored 17 of his 19 points in the first half, and Kaiser Gates, who set career-highs in points (19) and made threes (5). Macura implied afterward that the Arizona State loss was a blessing in disguise for Xavier.

“I think it was good for us,” Macura told Bill Raftery on the Fox Sports 1 telecast. “Arizona State’s guards really got the best of us, and I’m just happy we came out [tonight] and played together. We played great team defense, we rebounded, we boxed out, and I couldn’t be any more happy of the team.”

Gates, meantime, almost singlehandedly forced Baylor to switch out of its patented matchup zone much earlier than Scott Drew would have desired. The rising junior continued to do damage from deep even after the Bears went man-to-man. A 6-foot-8 modern power forward, Gates is averaging 11.3 points per game this season while making 45 percent (21-of-47) of his threes. Unsurprisingly, his production has attracted the attention of NBA personnel.

But the biggest takeaway from Tuesday was not Gates, nor Macura, nor even the oddity that Baylor’s Terry Maston scored 15 points on 7-of-9 shooting in the first half only to not even attempt a field goal in the latter frame. The biggest takeaway was that in a game with a Sweet 16 feel to it, Xavier was able to clamp down defensively, holding Baylor to 0.94 points per possession after allowing a dreadful 1.4 points per trip to Arizona State just four days prior. Let’s see if Xavier can maintain that level of defensive intensity in what should be a thrilling Crosstown Shootout on Saturday. Photo: @XavierMBB Follow Mike on Twitter Follow Adam Zagoria on Twitter And like ZAGS on Facebook

No. 21 Xavier downs No. 11 Cincinnati - Three Takeaways from the 'Crosstown Shootout'