No. 10 Miami Passes First Test with Flying Colors in Win Over No. 12 Minnesota | Zagsblog
Follow @adamzagoria 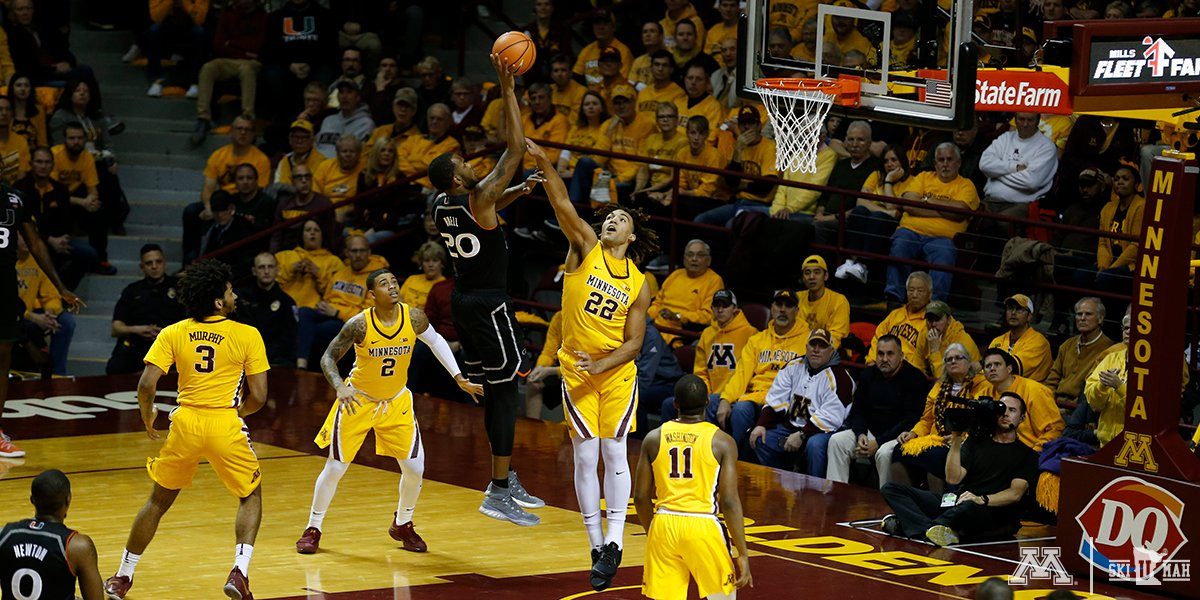 By MIKE McCURRY  Between the return of dynamic guards Bruce Brown and Ja’Quan Newton, the anticipated development of Dewan Huell, and Jim Larranaga hauling a Top-10 recruiting class to Coral Gables, Miami figured to be among the nation’s elite this season. But we had no way of knowing that for sure until Miami faced a legitimate opponent. On Wednesday, the No. 10 Hurricanes finally did. And they passed their first true test of the season with flying colors, traveling to Minneapolis and handing No. 12 Minnesota its first loss of the season, 86-81. Huell led the way for Miami with a career-high 23 points, while Brown contributed a season-high 16.

Here are three quick takeaways from a high-level ACC-Big Ten Challenge tilt. Miami’s guards played like they had something to prove. Entering the season, Miami had the right to lay claim to boasting one of the nation’s top backcourts. But, even against lesser competition, a few of those guards stumbled out of the gates. Until Wednesday. Brown, a potential lottery pick, was averaging a rather pedestrian 9.8 points on 40% shooting thru Miami’s first five games. He was the best player on the floor against Minnesota, finishing with 16 points on 6-of-11 shooting to go along with 9 rebounds, 5 assists, and no turnovers. Newton is playing off-the-ball more often than usual but inexplicably came into Wednesday with nine total assists on the year. He matched that total against Minnesota. When he wasn’t dishing it off to Huell and others (more on that below), Newton was busy exhibiting his refined pull-up jumper. Chris Lykes also packed his A-game in his suitcase. The 5-foot-7 freshman chipped in with 10 points, including two threes—he’s shooting 42% from long distance on the season. Minnesota’s lack of depth was exposed. Minnesota’s frontcourt depth was already trimmed in August, when backup power forward Eric Curry (5.5 PPG, 5.2 RPG as a freshman) tore up his left knee in a pickup game and was ruled out for the season. The Golden Gophers’ backcourt rotation took a big hit a few hours before Wednesday’s tip, when it was announced that starting shooting guard Dupree McBrayer would miss the game with a right leg injury. When you’re going up against Miami, you’d like to have all the guards you can gather at your disposal. Without McBrayer, freshman Isaiah Washington was thrown into the fire and received his first start. The moment was too big for the Harlem native, and that’s putting it nicely. Washington did recover by making a few promising plays down the stretch, but they were of the too little, too late variety, and his final line was as follows: 14 points and 5 turnovers on 6-of-17 shooting. Those 17 shots led Minnesota. On a team with Jordan Murphy—who put up 17 and 14 for his eighth double-double in as many tries this season—Amir Coffey, and Nate Mason, Washington cannot be the guy taking the most shots, at least at this stage in his development. Furthermore, all 81 of Minnesota’s points were scored by the starters. Miami, on the other hand, came up with 16 bench points. Finding impact players beyond the starting five is going to be a season-long endeavor for Richard Pitino. Dewan Huell was a man amongst boys. Miami would benefit tremendously from five-star shooting guard Lonnie Walker breaking out one of these days, and I believe he soon will. But, as important as Walker is to the Hurricanes’ ultimate success, he’s not their X-factor. That distinction belongs to Huell.

Dewan Huell hammered on one of the nation’s best shot blockers. pic.twitter.com/n6h0d9ogcY

A former McDonald’s All-American who averaged 5.8 points and 3.1 rebounds as a freshman, the 6-foot-11 Huell has taken a major leap in his sophomore campaign—which is somewhat fitting, seeing as he routinely jumps out of the gym on the strength of his elite physical tools. After scoring 23 points on 10-of-16 shooting against a phenomenal Minnesota frontcourt featuring Murphy and Reggie Lynch, Huell is now averaging a team-leading 15.0 points per game while converting 70% of his two-pointers. Miami continuously exposed Lynch in the pick-and-roll, with Brown and Newton taking turns getting into the lane and either dumping it off or lobbing it up to Huell, an intelligent rim-runner. Defensively, Huell serves as an effective rim protector and the anchor in a four-guard lineup. Should he keep up this current torrid pace he’s on and at least hold his own against the likes of Marvin Bagley and Bonzie Colson, Miami is going to be right in the mix for a regular season ACC title. Photo: @GopherMBB Follow Mike on Twitter Follow Adam Zagoria on Twitter And like ZAGS on Facebook