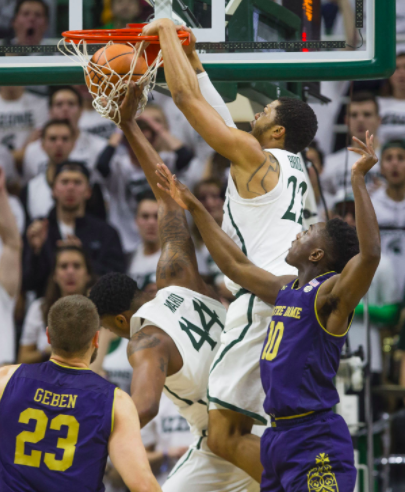 By SEAN BOCK For the second game in a row, Michigan State has taken care of a top-15 team. After blowing out No. 13 North Carolina in the PK80 Championship on Sunday night, the Spartans returned to the Breslin Center and handed No. 5 Notre Dame its first loss of the season, 81-63, in the Big Ten/ACC Challenge. Sophomore guards Josh Langford and Cassius Winston each had a game-high 17 points to lead Sparty. Here are three takeaways from the last 2017 Big Ten/ACC Challenge matchup. Rough Start for the Big Ten One of the biggest storylines in college basketball so far this season has been the struggles of the Big Ten. With the Michigan State win, the ACC won the annual Big Ten/ACC Challenge by a tally of 11-3, the most wins in the history of the challenge.

“I don’t think the Big Ten is quite as strong in the middle and the bottom as it has been in year’s past,” ESPN’s Jay Bilas said during the broadcast. “The ACC is a better league this year.”

Since the Duke loss in the Champions Classic earlier this month, the Spartans have knocked off North Carolina and Notre Dame in convincing fashion. Also, the Blue Devils’ win over Michigan State without Marvin Bagley III reinforces how good Duke has been this season. In Sparty’s case, they should feel even better about potentially winning the Big Ten regular-season championship based on how inconsistent the rest of the league has been thus far. Tom Izzo’s squad is loaded top to bottom, and has a great chance of sealing a No. 1 seed come March. Michigan State is more than Miles Bridges Coming into the season, the main question surrounding the Spartans was who would step up when Bridges was struggling. Langford and Winston answered the call Thursday night. Coming off a 23-point performance against UNC on Sunday, Langford had another strong outing scoring 17 points and shot 7-of-13 from the field. In his freshman year, Langford seemed to be uncomfortable on the floor at times, but has found ways to put the ball in the bucket so far this season, and it has been a huge plus for his team. Along with his 17 points, Winston dished out 7 assists, grabbed 7 rebounds and was 5-of-6 from 3. Though his primary role is as a pass-first point guard, Winston has impacted the game in a multitude of ways this season, especially in the scoring department as he’s averaging a little over 12 points per game compared to 6 last year. Bridges did have 14 points on 6-for-15 shooting — including a dunk on teammate Nick Ward — but hasn’t looked like the dominant player many were expecting him to be coming into the season.

Despite Bridges’ underwhelming start to the season, guys like Langford, Winston, Ward, Jaren Jackson, and even Matt McQuaid have stepped up to pick up the slack which is the reason why Sparty hasn’t lost since Duke. Lack of bench depth hurt Notre Dame Of the Irish’s 63 points, 61 came from the starting lineup. Notre Dame has one of the best starting fives in the country, but a team cannot generally expect to win a lot of games when they only get 2 points from their bench. Bonzie Colson had 17 points but shot 6-of-19 from the field while Rex Pflueger chipped in 15 points. Matt Farrell had a quiet 10 points and 7 assists on the night, but couldn’t find a way to get going as he was closely guarded throughout the contest. In the Maui Invitational Championship win over Wichita State, the Irish bench was only able to muster up 6 points but still came out victorious. If Mike Brey can’t get valuable production from his bench, the starting five will have to play more minutes, which could raise red flags as the season progresses. Photo: South Bend Tribune   Follow Sean on Twitter Follow Adam Zagoria on Twitter And Like ZAGS on Facebook