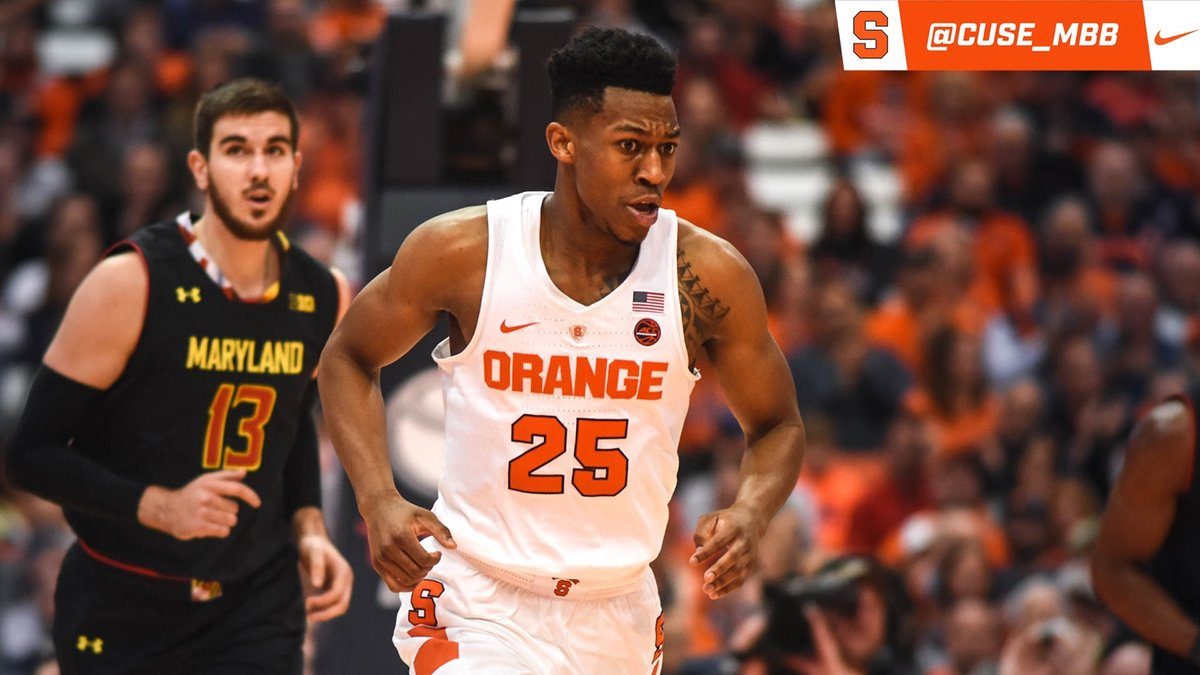 By MIKE McCURRY Tyus Battle almost didn’t play in Monday’s Big Ten-ACC Challenge versus Maryland due to a sore back. A game-time decision, Battle wound up giving it a go, scoring 13 of his team-high 18 points in the second half—including each of Syracuse’s last seven points over the final 64 seconds—to push the Orange past Maryland, 72-70. No wonder his back hurts. Battle took a hard fall in Syracuse’s win over Toledo last Wednesday, coming down right on his tailbone. Even if the Edison, N.J. native was to play against Maryland, it was unknown how effective he would be. We received a definitive answer to that question in crunch time. Kevin Huerter, Maryland’s sharp-shooting sophomore, gave the Terrapins a 66-65 lead at the 1:47 mark via a trailing three-pointer on the fast break, one of his seven made triples. But Battle would respond a few possessions later, using a textbook flare screen from freshman Marek Dolezaj to float to the left corner and give Syracuse the lead for good.

Battle then provided his own insurance, knocking down two free throws before completing a transition dunk to put the game on ice and improve the Orange’s record to 6-0. The 6-foot-6 sophomore is averaging 19.7 points per game. Backcourt mate Frank Howard also came up big for Syracuse, finishing with 15 points, 10 assists, 7 rebounds, and 7 steals. Syracuse shot just 3-of-18 from behind the arc (17%) but overcame that by dominating the paint, led by contact-craving slashers Battle and Howard. Syracuse freshman Oshae Brissett added 15 points and 13 rebounds. Despite taking a few ill-advised shots that surely raised Jim Boeheim’s blood pressure, Brissett (5-of-18 FG) got the better of Maryland’s Justin Jackson (8 points, 7 rebounds, 5 assists) in a battle of talented Canadian wings. Huerter scored a game-high 23 points, knocking down 7-of-9 three-pointers. The Clifton Park, N.Y. native was playing in front of roughly 300 family members and friends. Huerter’s heroics were not enough, however, as Maryland lost for the second time in its last three games (also to St. Bonaventure on Friday). Turnovers continue to cripple the Terrapins. Maryland, which entered the day ranked 341st out of 351 Division 1 teams in Turnover Rate, coughed up the rock 18 more times on Monday. Here are all the matchups comprising the 19th annual Big-Ten ACC Challenge (the first conference to register eight victories wins):

This week, all 14 #B1GMBBall teams take the court for the 19th annual #B1GACC Challenge. pic.twitter.com/zowT7NaQuu