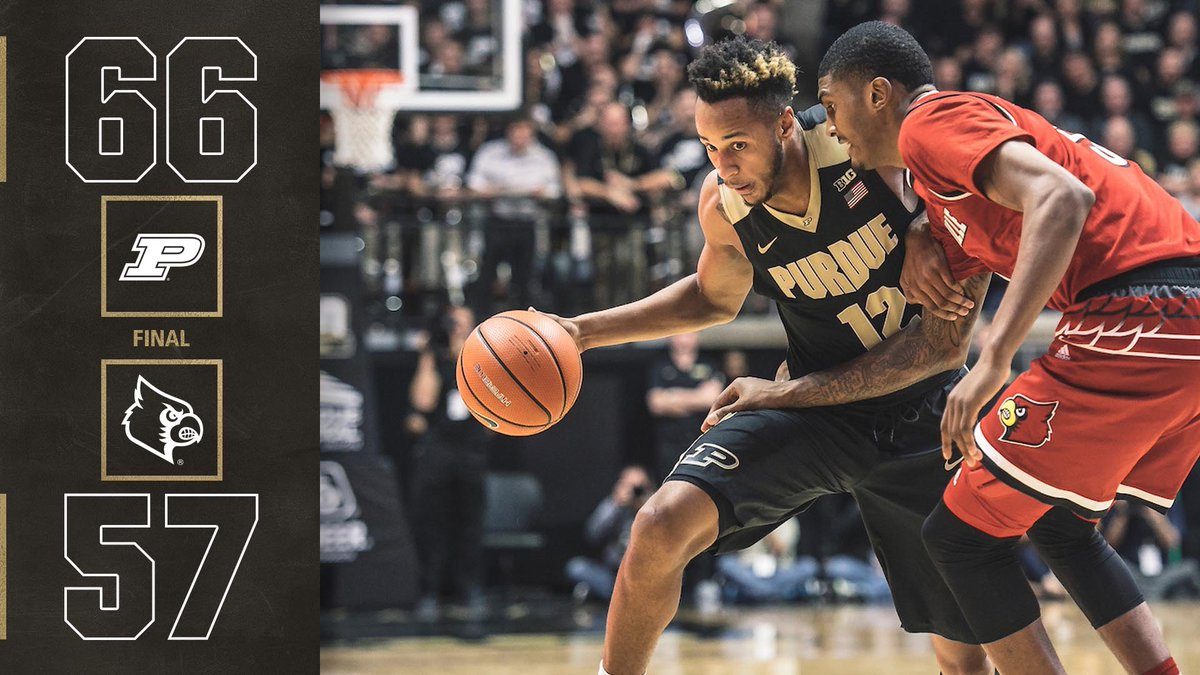 WEST LAFAYETTE, Ind. (AP) — Purdue coach Matt Painter gambled Tuesday night. Center Isaac Haas made sure it paid off. The 7-foot-2 senior played most of the final 15 minutes with three fouls, banging around and drawing fouls on Louisville’s leaner defenders. Eventually, Haas’ inside presence loosened up the defense for his teammates who used a late run to finally get past the 17th-ranked Cardinals 66-57 in the ACC/Big Ten Challenge. It was the Big Ten’s first — and only — win through the first two days of the event. “We were in foul trouble early,” Painter said. “To be in the position we were (at halftime), I really felt fortunate. In the second half, we wanted to get the ball inside, get some points from those guys and I think we did a good job of that.” It wasn’t pretty. Both teams struggled to score and each lost key players because of more foul trouble early in the second half. But Haas showed size still works against smaller, more athletic defenders. After being reinserted with the Boilermakers (6-2) trailing 33-27, Haas drew five fouls over the next 2:05, spurring a 16-3 run that turned Purdue’s 33-27 deficit into a 43-36 lead with 9:12 to play. He had nine points, four rebounds and needed some extra attention in the training room afterward. “He got hit right on the elbow and wasn’t able to make a fist,” Painter said. “He’s still in the training room, so right now I don’t know (the extent).” Vincent Edwards led the Boilermakers with 15 points and seven rebounds. Carsen Edwards and Dakota Mathias each scored 13 as the Boilermakers beat their second straight ranked opponent and their 11th straight at home. Louisville (4-1) was led by V.J. King with 17 points and Deng Adel with 13. But as Haas banged around inside, they struggled to find answers. Anas Mahmoud went to the bench with his third foul right after Haas re-entered. Ray Spalding didn’t fare any better, drawing his third and fourth fouls in a 35-second span that put him on the bench with 13:46 left. Forty-two seconds after that Mahmoud was back on the bench with his fourth foul.   Here’s the updated scoreboard: All times ET