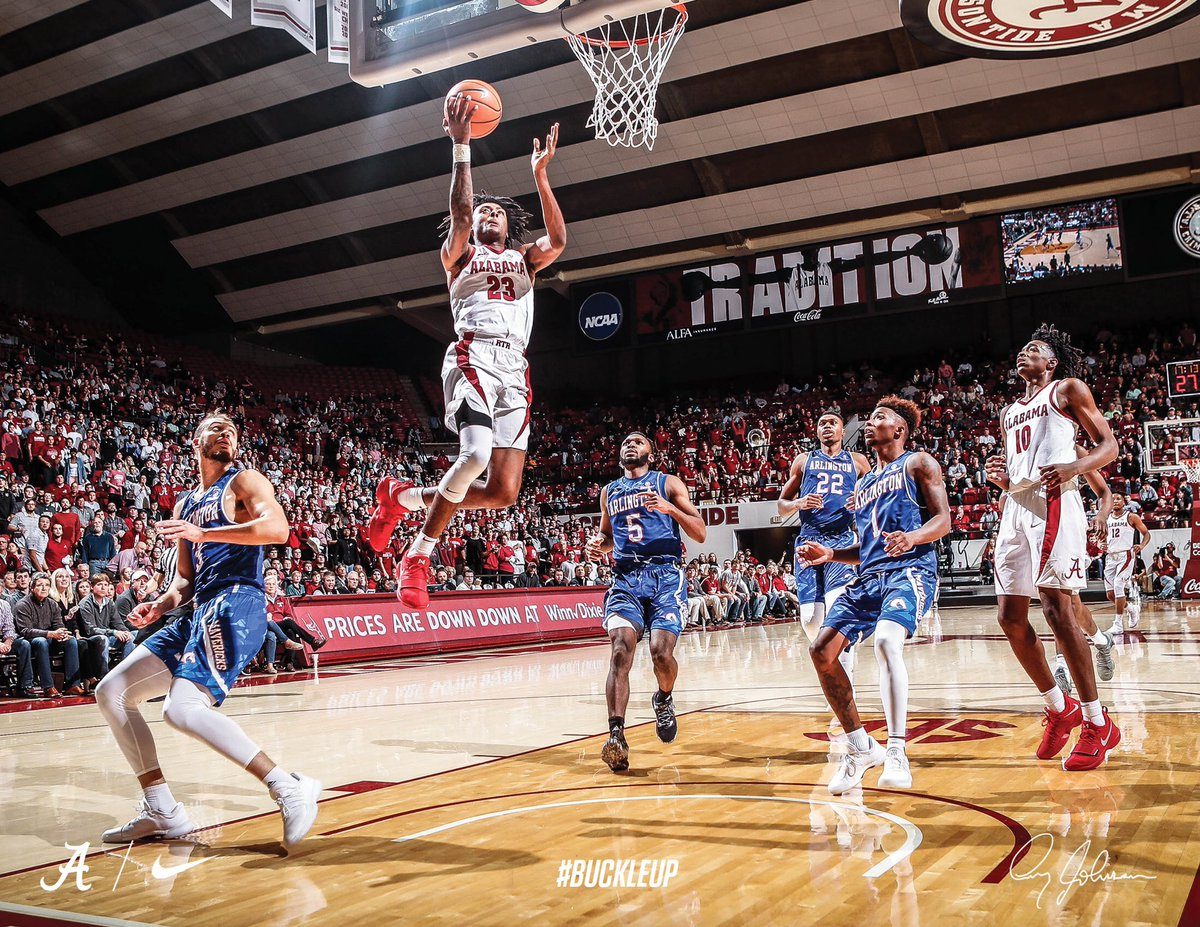 By MIKE McCURRY NEW YORK—Down in Tuscaloosa, Avery Johnson has the unenviable task of trying to step out from under Nick Saban’s shadow. Look no further than Saturday. Johnson’s men’s basketball program, ranked in the AP Poll for the first time since December of 2011, squares off against No. 14 Minnesota in the Barclays Center Classic final (5:00 PM ET).

IT'S GAMEDAY ! Get ? in for tonight's top-25 matchup with highlights from our big win in Brooklyn yesterday

It’s one of the biggest games of Johnson’s tenure, this being his third season at the helm. But of course, the Iron Bowl (3:30 PM ET) will be going on at the exact same time, pitting Saban’s top-ranked football powerhouse against No. 6 Auburn in a winner-take-all game for the SEC West, one which also carries major playoff implications. That’s just how it is at Alabama. Though Johnson and his players are certainly doing their part to shake the stigma of it solely being a football school. “We have a lot of tremendous sports teams on our campus, not just football,” said Johnson on Friday, following Alabama’s 71-59 victory over BYU at Steinberg Wellness Center on LIU-Brooklyn’s campus, improving them to 5-0 on the young season. It’s fitting that the Crimson Tide have a chance to make a major statement at the Barclays Center of all places, considering Johnson, who has seven seasons of NBA head coaching experience under his belt, called the venue home for the first 28 games of the 2012-13 campaign before the Nets fired him in December of that year. Johnson understands the platform that Saturday’s marquee matchup provides. “Now we’re here in the Northeast, in Brooklyn,” Johnson said. “There’s been a lot of great basketball played in Brooklyn, I know that for a fact. Not necessarily with my team [the Nets], but overall.” Upon being let go by the Nets, Johnson worked as an NBA analyst for ESPN. That remained his title until April 7, 2015, when he was named the 20th head men’s basketball coach at Alabama. The Tide went 18-15 in his first year and 19-15 last year. Both resulted in NIT appearances. Johnson spent the majority of those first two seasons finding his way and getting a feel for the college game. The biggest adjustment was learning the difference in roles between the on-campus lifestyle and the NBA. After all, he didn’t have to worry about study hall, curfew, and tutors while coaching Deron Williams and Brook Lopez. “In the college environment, you just wear a lot of hats,” said Johnson, whose current roster includes son Avery Johnson Jr. (7.5 PPG). “You’re a teacher, father figure, big brother, counselor. But it’s very gratifying.” A coach’s third season tends to be a make-or-break year. Being that Alabama hasn’t made the NCAA Tournament since 2011-2012 and last won an NCAA Tournament game in 2005-2006, when Mark Gottfried was strolling the sidelines, Johnson had a longer leash than most coaches in power conferences. Regardless, all of the pieces were in place for Johnson and Alabama to break through this season. The Crimson Tide return seven of their top eight scorers from last season’s squad, which flirted with the bubble thanks to a Top-10 defense nationally according to KenPom. That includes sophomores Dazon Ingram (12.3 PPG, 5.5 RPG, 3.8 APG this season) and Braxton Key, an SEC All-Freshman selection whose season debut has been delayed due to meniscus surgery, as well as junior Donta Hall (9.3 PPG, 6.8 RPG, 3.0 BPG on 82% FG). To that core, Johnson added the nation’s eighth-best recruiting class, headlined by projected Top-10 pick Collin Sexton (25.3 PPG, 4.7 APG on 63% FG) and John Petty (15.8 PPG, 17 made threes in four games), currently Alabama’s top-two leading scorers. The result is a deep, talented, balanced product that thrives on physicality but is also by far Johnson’s most offensively-gifted team, particularly in the shot-making department. “Avery’s going to have a fun year,” said BYU head coach Dave Rose. Johnson believes there are still higher pinnacles to reach this season, too. That’s the nature of dealing with the fifth-youngest team in the country. “We’ll continue to grow and gain some experience, and we hope when we gain that experience with our talent, then we’ll be able to make that next step,” said Johnson. “But we’re not ready to take that next step yet.” When that next step is inevitably taken, Alabama will be more than just a football school. Photo: @AlabamaMBB Follow Mike on Twitter Follow Adam Zagoria on Twitter And like ZAGS on Facebook