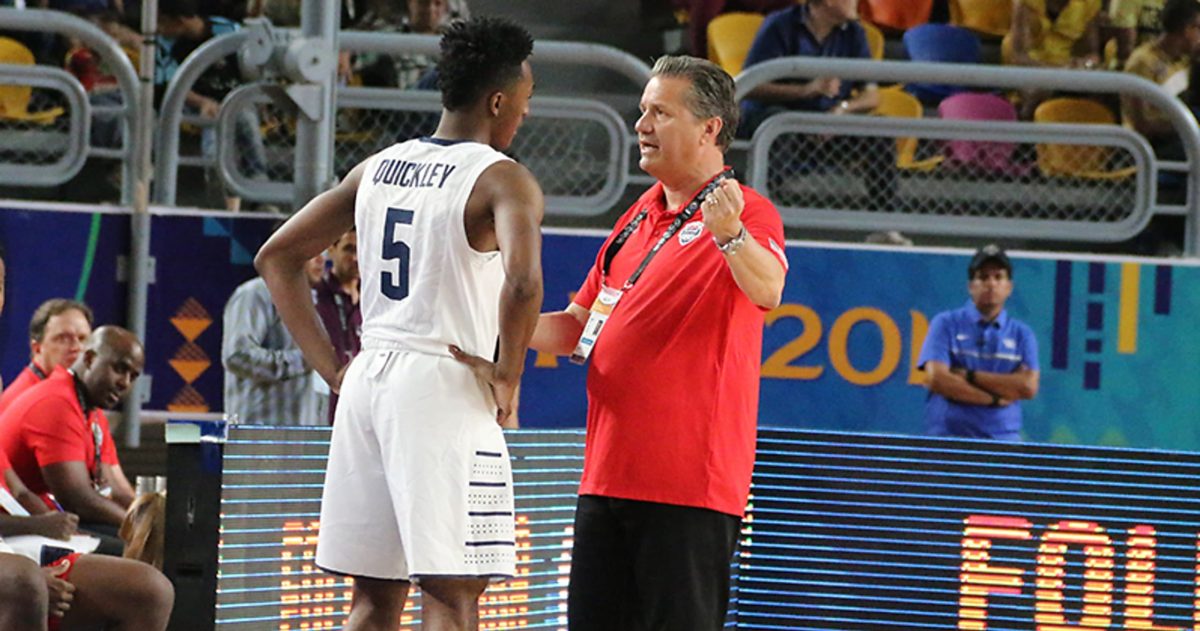 Kentucky officially announced the signings of Tyler Herro, Keldon Johnson and Immanuel Quickley for the 2018 class.

All three players are consensus four- or five-star prospects and all are ranked in the top 50 by the major national recruiting services.

“We’ve signed three really good players, really good kids who had a burning desire to be at Kentucky, which tells you they’ve got a toughness to them,” UK head coach John Calipari said. “They didn’t need to be begged; they wanted to be here. All three are guards, all three are tough, and all three have a fight and a skill about them. All three of them are gym rats – the kind of guys who come here and do well. All three are driven and wired the way you have to be to be successful here. They’re going to add to what we do.”

Kentucky remains in the mix for Zion Williamson, Bol Bol and Moses Brown who will sign in the spring.

“I’m excited for this class,” Calipari said. “And we’re not done yet. We have to see where all this stuff goes, but our need, we have filled. These three guys are what we needed, and that’s what’s happened. I’m excited.”

#BBN, please welcome @IQ_GodSon, Keldon Johnson and @raf_tyler to our family. We’ve signed three really good players, really good kids who had a burning desire to be at Kentucky, which tells you they’ve got a toughness to them! https://t.co/j4Wyp68GrS

The name of the game is scoring the basketball, something Herro excels at doing. Crafty, long and equipped with a quick trigger, Herro has the ability to score from all over the floor. He can catch and shoot, he possesses a good midrange game and he can run in transition.

“Tyler can shoot it and he can score it,” Calipari said. “He has different ways of playing, but you’re talking about a big guard who is as tough as nails – a fighter, a battler. He has that little bit of swag to him like a Devin Booker type of kid. He’s got a burning desire of, ‘Let’s do this. This is where I want to be. This is where dreams are made and met.’ ”

At 6-foot-5, Herro has length, and now listed at 195 pounds by 247Sports, he’s quickly adding muscle to his frame. The shooting guard out of Whitnall High School in Greenfield, Wisconsin, averaged 23.9 points and shot 39 percent from 3-point range in his junior season in high school.

The top-ranked player out of Wisconsin, Herro is considered one of the top shooting guards in the 2018 class. A consensus four-star recruit, Herro is ranked as high as No. 27 in ESPN’s rankings, No. 38 by Rivals and No. 40 by 247Sports.

Herro was one of 54 players selected for the USA Basketball Junior National Team minicamp in October. He also averaged 14.8 points, 5.9 rebounds and 3.1 assists per game on the Nike circuit this past summer, shooting 36 percent from 3-point range.

“The opportunity to play for a Hall of Fame coach in John Calipari in front of the best college fans in the world, Big Blue Nation, was too much to pass up,” Herro said of his decision to sign with the Wildcats. “I can’t wait to get to Lexington and get this jourwney started.”

A competitive wing with an arsenal of scoring tools and a high motor, Johnson is one of the most impactful players in the 2018 class. He is a deceptive athlete with a physically mature frame who excels off ball screens and uses his size to his advantage.

“Over the life of recruiting him, we did like we do with all of these kids: We want kids that want to be here, that we know can succeed here,” Calipari said. “With Keldon, you’re talking about a guy that physically goes after balls. He can score it, he can handle it and he can pass it. He’s one of those guys that will drive and miss it and then go grab the rebound and stick it back in. Maybe tip that one, grab that one. He’s that kind of relentless player.”

A 6-6 shooting guard out of Oak Hill Academy in Mouth of Wilson, Virginia, Johnson is a consensus five-star player and one of the best in the class of 2018. A native of South Hill, Virginia, he previously played for Huntington Prep in Huntington, West Virginia, before transferring to Oak Hill for the 2017-18 season.

Johnson is ranked as high as the No. 7 overall prospect by ESPN, including third at his position. 247Sports ranks him as the nation’s No. 11 overall player, while Rivals has him at No. 18.

He led his Boo Williams (Va.) AAU team to the semifinals of the Peach Jam after averaging 20.7 points, 8.5 rebounds and 3.1 assists during the Nike regular season. Johnson took home MVP honors at the NBPA Top 100 Camp in June. Like Herro, Johnson was one of 54 players selected for the USA Basketball Junior National Team minicamp in October.

“Kentucky was always honest and upfront with me from the beginning and I loved that about Coach Cal,” Johnson said. “He made the process about me, and I trust him that he is going to be about me and helping me become my best.”

Big. Long. High basketball IQ. All three things are what a coach would want from his leader of the offense and all intangibles Quickley possesses. Billed as a big lead guard with a solid feel for the game, Quickley is a good decision maker and a superb distributor of the basketball.

“When you talk Immanuel Quickley, you’re talking about one of the hardest-working kids,” Calipari said. “He comes in as a point guard, but like all of our guards, he can play combinations. He can play with another point guard. He’s big, he can shoot it and he can score it. Great leader because he works so hard that people want to be a part of his sphere.”

A 6-4 guard out of the John Carroll School in Bel Air, Maryland, Quickley is a consensus five-star prospect. Considered a consensus top-three player at his position, he’s ranked as high as No. 10 by Rivals, No. 12 by ESPN and No. 13 by 247Sports.

In his junior season at John Carroll, Quickley averaged 23.7 points and 7.2 assists. He scored 30 or more in five games, 20 or more in 14 games and finished with eight double-doubles. He also averaged 25.7 points, 4.7 rebounds and shot 42.1 percent from 3-point range in the Adidas Summer Championships in July.

Quickley was a member of the 2017 USA Men’s U19 World Cup Team that competed in Cairo. Playing under Calipari, Quickley averaged 6.7 points and 2.4 assists in 18.3 minutes per game. He was named the Baltimore Sun Metro Player of the Year in 2016.

“The tradition of Kentucky point guards really stood out with guys like John Wall to De’Aaron Fox,” Quickley said of his decision to sign with UK. “I know Coach Cal is going to push me on and off the floor to be my best and ultimately prepare me for the highest level.”

With the latest additions, Kentucky has signed 47 top-50 recruits, 40 top-25 players and 23 top-10 players (according to Rivals) in Calipari’s 10 recruiting classes at Kentucky.