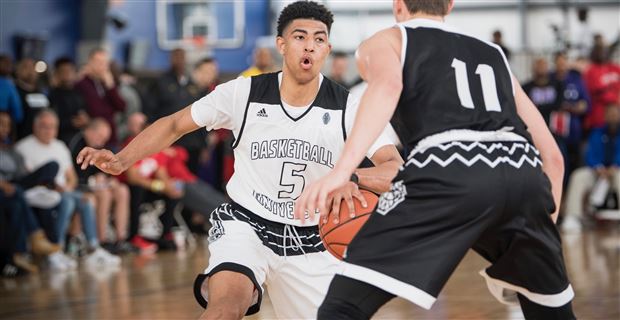 Quentin Grimes, the 6-foot-5, 195-pound point guard from College Park High School (TX), enjoyed his final official visit to Marquette this past weekend and then hosted Kansas coach Bill Self and his staff on Monday. Kansas was coming off a 93-87 win over Missouri on Sunday in the Showdown for Relief that raised over $1.75 million for hurricane victims. “Coach Self brought his entire coaching staff down to check in with Quentin and watch him workout,” Rhossi Carron, Grimes’ AAU program director with Basketball University, told ZAGSBLOG on Tuesday. “They talked briefly about the scrimmage vs Missouri and the overwhelming support and fan base that follows the KU basketball program; 19,000 fans for a pre-season scrimmage speaks volumes. They also reminded Quentin about the success that Coach Self has had with his guards and the freedom that they have to play offensively. They specifically highlighted the development and success of Frank Mason and the possibility of Graham having a similar breakout senior season. With Graham’s departure, they envision Quentin coming in to have a lead role and be in position to have early success.” (Self and his staff later visited 2019 forward Matthew Hurt in Minnesota). Grimes has now visited Texas (Sept. 22), Kentucky (Sept. 29), Kansas (Oct. 13) and Marquette (Oct. 20) and will weigh his options going forward. “He really liked it, I think he was surprised at the level of the program,”  Carron said. “I think he left there surprised. I think it far exceeded his expectations as far as where as they are as program and the talent on the team and the facilities and the whole nine. I think he left there with a good feeling about where they are and what there future looks like.” Marquette is pitching that Grimes will be the main man going forward. “For him, their selling point is he’s going to come in and be the guy,” Carron said. “They do feel like he has a chance to be one-and-done. He could come in along with a really good supporting cast of guys that they have there, and kind of take the program to another level. They feel that he would be a game-changer for them. I think his visit really made him feel that he was a priority and that he’s really important to what they envision for their future.”

Grimes also played this month at the USA Basketball minicamp with more than 50 players, including  Bol Bol, Romeo Langford and Zion Williamson. Going forward, he will now weigh his options with his family and inner circle. “He’s done with visits,” Carron said. “I think it was such a whirlwind for him because his visits along with USA Basketball was back-to-back-to-back-to back. I think he’s going to take a week or so to just chill out and relax and refocus on getting ready for his high school season. I think that’s his No. 1 priority. I think they start practice this week, so just preparing for a really good high school season. “Over the next two weeks he’ll sit down with his family and coach Teddy Wheeler, the head coach of his AAU program and myself and try to figure out the pros and cons of each one so he can make an educated decision. “The plan is to announce in November and hopefully be a part of the early signing period. He’s down to four schools and I think each one of those schools has done a really job of laying out a clear plan of where he fits, what his role would be and what they expect from him. He’s visited all four schools so he has all the information that he needs. He just has to take some time to reflect on those visits and prioritize what’s important to him and to his family and go from there.” Photo: Adidas