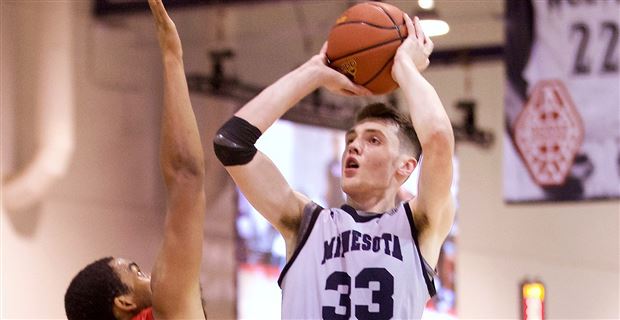 Matthew Hurt, the 6-foot-9 forward from Rochester (MN) John Marshall High, had an eventful recruiting weekend with unofficial visits to both Duke and North Carolina. The No. 5 player in the 2019 ESPN 60, Hurt had previously visited Kentucky and Indiana in September. On Monday, Kansas coach Bill Self and his entire staff flew in and sat down with Hurt, his father, Richard, told ZAGSBLOG. It was Self’s second visit to see Hurt inside a month. (Self and the Kansas staff also visited with 2018 point guard Quentin Grimes.) “They talked about their success with big guards/wings over the years like [Andrew] Wiggins, [Kelly] Oubre, [Josh] Jackson, etc.,” Richard Hurt said “Also said they have a way of getting guys out of their comfort zone to help them achieve success at the next level. It was a good visit and conversation.” Hurt will trip to Kansas Nov. 17 for the South Dakota State game. “We did the ‘Late Night in the Phog’ deal last year,” Richard said. “I think we’re going to go down in mid-November to a game at Kansas against South Dakota State.” As for the Duke trip on Friday, Hurt was on campus for “Countdown to Craziness” when 2018 star Zion Williamson visited along with 2019 guys like Armando Bacot and Joey Baker and 2020 Isaiah Todd. “I think the message was not just in words but also what we saw in the scrimmage at Duke, I think the coaches wanted to point out how he would fit in,” Richard said. “Coach K asked Matthew after the scrimmage when we were meeting with him in the office was, ‘Who do you see that’s out there that’s like you?'” While Matthew Hurt was processing the answer, his dad said, Coach K said, “The answer is nobody. We’ve got a talented team, we’ve got a big team. But there’s nobody that has your versatility, that can go inside/outside and do the things that you can do.” Said Richard: “And that’s not a knock on any of the players that he has because Marvin Bagley is scary good, and I’ll be surprised if Grayson Allen doesn’t have a tremendous season. And Gary Trent is an elite scorer. Then you got Wendell Carter, [Marques] Bolden, Trevon Duval and all the different options. But [Coach K] said, ‘There’s nobody out there than can do what you do.” Hurt also spent some time with the 6-5 Williamson, who was coming off a Kentucky visit for “Big Blue Madness” before the Duke visit. Williamson is also considering Kansas, UCLA, South Carolina and Clemson. “Matthew and he interacted a little bit,” Richard said of Williamson. “I talked to his stepdad and his mom.” As for the message at Duke, Richard said: “Just seeing the coaches wanting to show A) how special a place it was and B) where he could fit in and where the freedom that they allow their guys would fit him tremendously.” On Saturday, Hurt spent the day at North Carolina, the reigning NCAA champions who are also prioritizing him in the Class of 2019. That visit included having dinner with head coach Roy Williams and associate head coach Hubert Davis and watching Game 6 of the Yankees-Astros series on TV. “Coach Williams wanted Matthew to kind of watch Luke May a little bit,” Richard said. “He said, ‘Look may not have your talent but he’s got the versatility where he can go inside and go outside, so watch him in practice.” He added: “It was a great trip overall, it allowed Matthew to see two places that I think will be in there at the end.” Kentucky is also working hard for Hurt, who visited in September but has not yet officially received an offer. Kentucky coach John Calipari is expected to visit in December. On the visit the week before “Big Blue Madness,” Hurt was greeted like a star by Kentucky fans. “On that visit alone he probably signed about 20 autographs and probably took another dozen or so photos with fans,” Richard said. Meantime, Matthew has no official list, but the schools working hardest, his dad said, include Duke, North Carolina, Kansas, Kentucky, UCLA, Minnesota, Indiana, Iowa and Wisconsin. “Those are the ones that are most active right now,” his dad said. “It’s really kind of narrowed its focus.”   Photo: Scout.com