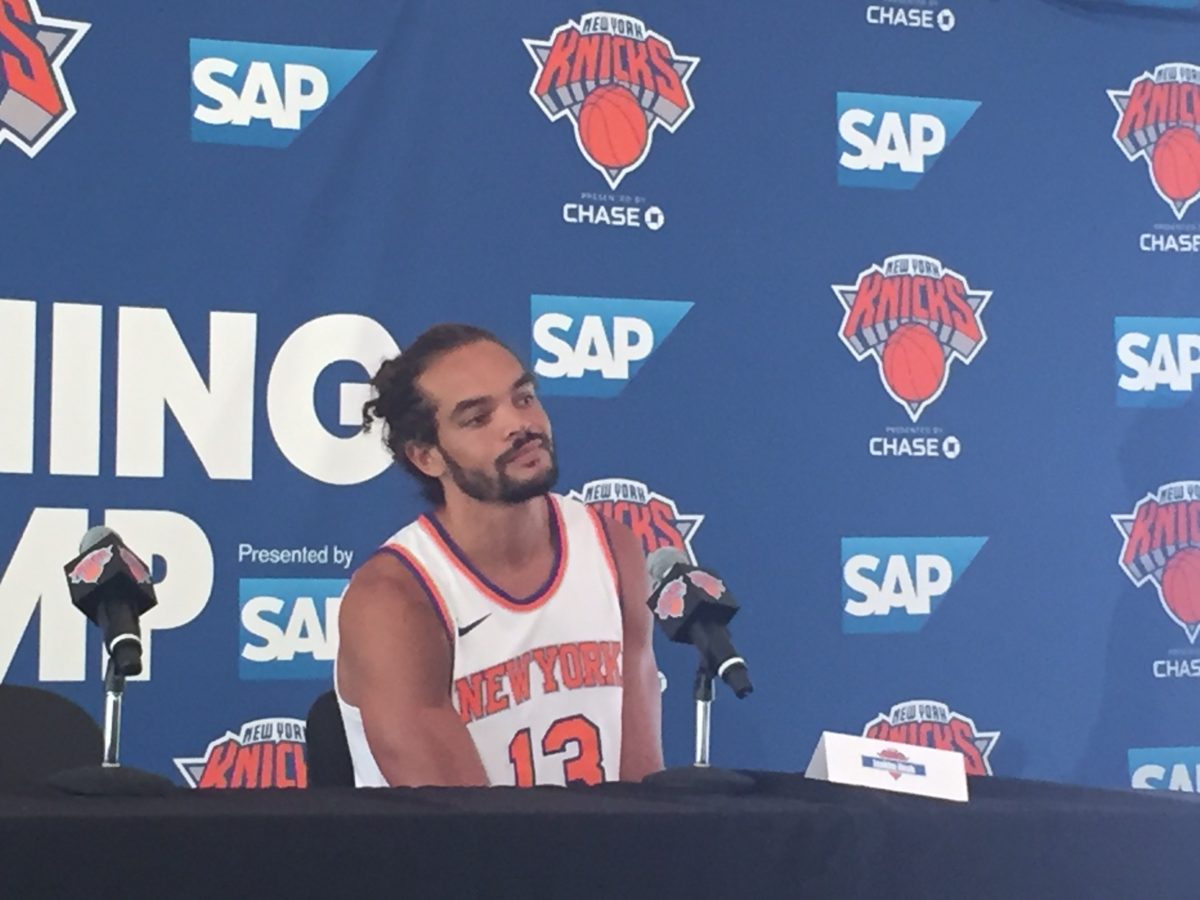 TARRYTOWN, N.Y. — Joakim Noah was given a platform during Knicks Media Day on Monday to sound off on some of his beliefs about the state of America. And the Knicks’ center didn’t hold back. Noah said it’s too easy to get guns in this country, and that politicians like President Donald Trump should invest more time and resources into taking care of the youth in America’s cities. “I would make it a lot harder to get guns, No. 1,” Noah said. “I mean, kids have access to guns in this country and we don’t even talk about it. Kids are killing each other at alarming rates and it’s still so easy to buy guns, to buy bullets. We point fingers whenever we can. It’s just so easy to buy a gun in this country, so I would start with that.” He added: “I would make more of an investment in the communities in the hood. There definitely needs to be more of an investment by these politicians. I think that’s where violence prevention starts, in these community centers. And if you go into these neighborhoods, there’s not much going on. So I think  if we can invest in the kids, I think the violence will go down.” Asked about the ongoing protests across the NFL in response to Trump’s comments suggesting owners should fire players who don’t stand for the anthem, Noah said he supported the protests. “I think it’s great because we’re finally talking about what’s important,” he said. “Obviously I have my beliefs. I put in a lot of work in the neighborhoods trying to help at risk youth. I have my opinions but I respect this country a lot but we have to look at everything that’s going on as a positive because we’re finally talking about issues that are usually swept under the rug. Because somebody takes a knee we’re finally talking about what’s important.”

Knicks’ Joakim Noah suggests that gun control would be a place to start repairing the country. Video: pic.twitter.com/aoj78xYayp

As for his own career, Noah, 32, is looking forward to rebounding from shoulder surgery in April and contributing to the Knicks in the post-Carmelo Anthony Era. “I think that it’s been a tough year,” he said. “Last year was very tough for me. I had to deal with a lot of adversity but I used this summer to regroup and refocus, train really hard and I’m excited to be in camp and be a positive player for this organization.” After signing a $72 million contract, Noah averaged 5.0 points and 8.8 rebounds in 46 games last season. In March, he was suspended 20 games without pay for violating the league’s anti-drug policy. The suspension will carry over into at least the first 10 games of this season and likely longer. “I’m in a position where I had a really rough year last year,” he said. “I’m coming off injuries. And I just want to redeem myself for myself more than anybody else. Just come back and look, I got paid a lot money to be here and I just want to be at peace with that.” Noah, a native of New York’s Hell’s Kitchen and the son of French tennis legend Yannick Noah, will be competing with Enes Kanter and Willy Hernangomez for minutes at the center position, unless GM Scott Perry deals one of them before or during the season. “We have a lot of bigs,” Noah said. “We have a lot of quality bigs so it’s on me to just go out there and bring something to the squad.” As for what the Knicks might do in the form of protests, Noah figures to be among the leaders in any decisions that are made. “No, we haven’t spoke about it yet,” he said. “It’s obviously a very serious issue and I’ve been thinking about it for a while. But I think that as an organization they want us to do things together, but we’ll see. I’m not sure.” Follow Adam Zagoria on Twitter And like ZAGS on Facebook