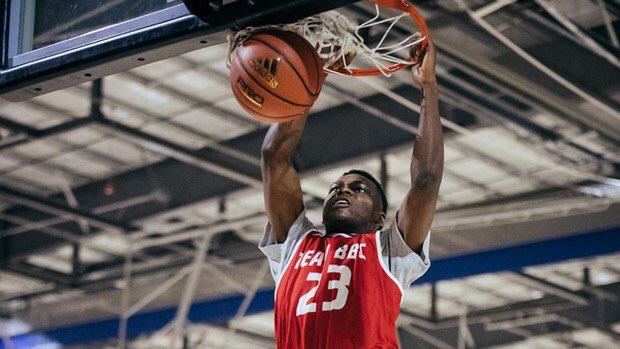 Montez Mathis, the 6-foot-5, 195-pound Class of 2018 shooting guard from John Carroll (MD) School, announced his commitment to Rutgers on Friday, one day after saying he needed more time to decide. Ranked the No. 14 shooting guard in the Class of 2018, Mathis also considered UConn and Virginia Tech. “Coach [Steve] Pikiell and the coaching staff really built a great relationship with my parents,” he said by phone. “I feel as though he’s going to turn the program around. I think we can be real good. We have three recruits in the 2018 class I think we’re going to be real good. “I can guard from 1 through 3 and play from 1 to 3.” Mathis is Rutgers’ second pledge in two days, following the commitment of Mac McClung on Thursday. They also have 6-9 center Mamadou Doucoure of Our Savior New American. “I’m going to try to recruit some [other] people,” he said. “As of right now, I don’t have anybody in mind.” As for UConn, Mathis said Rutgers was simply a better fit. “I was considering UConn, I just had to have final talks with my family and my parents and I just felt that Rutgers would be a better fit,” he said. “Everything, playing time, turning the program around.” He plans to get to campus “soon, when my schedule is free.” “Montez’s upside is tremendous,” Jide Sodipo, the Executive Director of The Team BBC Youth, previously told ZAGSBLOG. “He’s still working to improve is overall game. He’s a big-time athlete that loves to attack, and as he continues to improve his shooting — which he has improved a lot the last two months due to is work in the gym — he will definitely be a top 25-50 prospect by the spring.”   Follow Adam Zagoria on Twitter And like ZAGS on Facebook