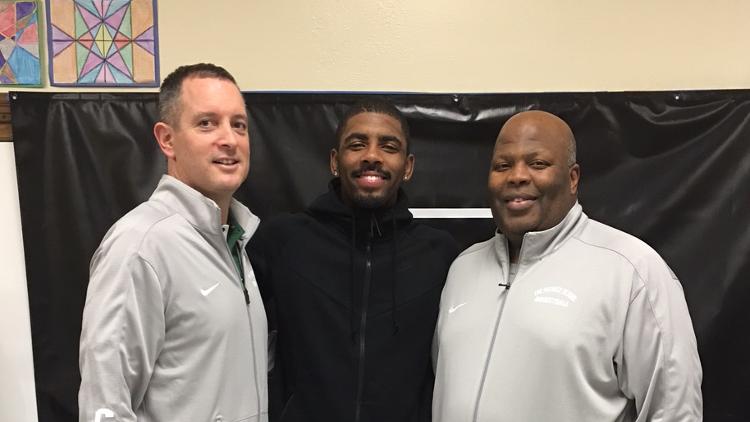 Kyrie Irving ran in an open gym with several high school players from his alma mater during the past few days, but in that setting he preferred to talk about teamwork instead of teams. Irving has asked the Cleveland Cavaliers for a trade, with one source telling ZAGSBLOG it’s “inevitable” he will be dealt. But Irving was focused only on playing with the high school guys during the open gym, not on his future whereabouts. “No, there was absolutely no conversation about him going anywhere,” said Giorgi Bezhanishvili, a 6-foot-10 18-year-old native of the Republic of Georgia who recently transferred to The Patrick School in Hillside, N.J. “He didn’t want to talk about it. We just talked about regular basketball stuff and all that. “He just said he’s so stressed this month and then from that everybody understood we shouldn’t ask him about nothing so nobody said anything.”

Kyrie Irving, just back from a promotional tour in Asia, played pickup at his former high school in NJ on Thursday.

Bezhanishvili said they played five games at the school on Monday, and he was on Irving’s team for three of them. “Oh, that was something different,” he said. “My first 10 minutes I couldn’t believe it. I was just looking at Kyrie. But afterwards you see he’s just a player. He’s on another level but he’s still a basketball player, so you get used to it. But he’s unbelievable, he on another level. He was making  shots, talking to everybody, picking guys up on defense, he was unbelievable.” Atiba Taylor, who just transferred into The Patrick School from Hackensack High School, had the pleasure of guarding Irving for much of the open gym. “It was a good experience playing against a top guard in the NBA,” he said. “I was guarding him but yeah he was scoring.” Asked what was the hardest move to defend, Taylor said, “Probably the in-and-out-stepback, I fell for that.” Bezhanishvili said Irving emphasized teamwork to the players, many of whom are new to the program, or will have expanded roles after last year’s Celtics team won the Tournament of Champions title with six Division 1-bound seniors, including Kentucky freshman Nick Richards and Seton Hall’s Jordan Walker. “He was just saying that basketball is not just one-one-one, he said everybody’s good in one-on-one,” Bezhanishvili said. id. “We should share the ball more, play more together and be really competitive and really try to win because it’s all about winning.” As for where Irving will do his winning next season in the NBA, Taylor hopes he comes to the Knicks. “Yeah, cause he’s from Jersey so if he goes to the Knicks he’s closer to home, he’ll sell way more tickets,” Taylor said. Chris Chavannes, the Patrick School coach, told FanRagSports.com the Knicks should do “everything to get him.” “His first choice is New York,” a source close to Irving told ZAGSBLOG. “The Knicks is where he’d love to be.” The Spurs, Heat and Timberwolves are among the teams also on Irving’s wish list. Meantime, the kids at The Patrick School simply dream of following Irving into the NBA — regardless of which team he’s on. “Oh, that’s my ultimate goal from when I started basketball,” Bezhanishvili said. “My mom always told me if you play and play hard so much you can go to the limit. And the limit is NBA, so so my goal is NBA. That should be everybody’s goal and for sure that’s my goal, too “I think I have the tools to make it and if I work hard enough, and I will work hard enough, I could make it.” And Like ZAGS on Facebook

Dedric Lawson Suspended by Kansas After 'Altercation' in Practice