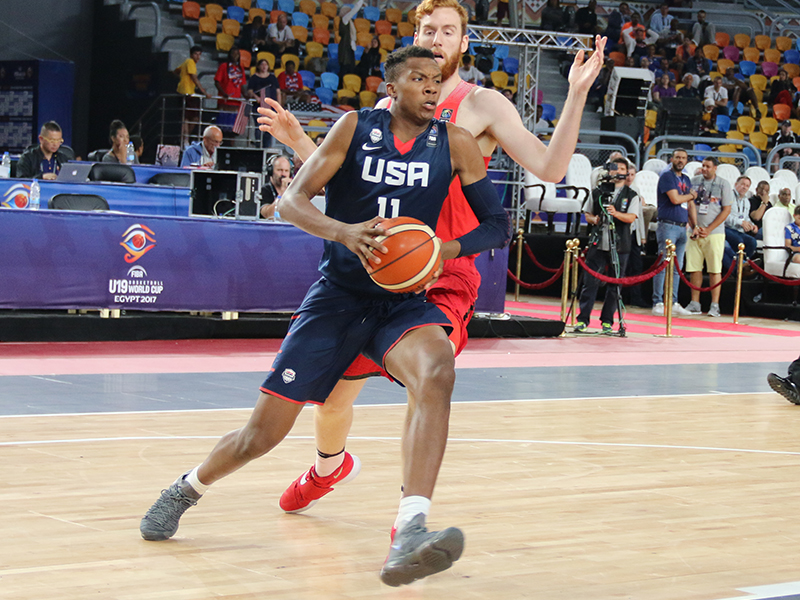 AUGUSTA, Ga. — Louis King, the 6-foot-8 small forward from Hudson (N.J.) Catholic and Team Final, is hopeful of landing a Kentucky offer after playing for Wildcats coach John Calipari in the FIBA U19 World Cup in Egypt. Cam Reddish, King’s 6-foot-7 Team Final teammate, said he expects King will land an offer soon. “Yeah, I think he’ll get it,” Reddish said. “I think it’s just a matter of time.” Calipari had access to four high school players via the USA team in King, Reddish, Romeo Langford and Immanuel Quickley. All except King hold Kentucky offers. Still, King is being courted by a number of schools, including Syracuse, Kansas, Louisville, Miami, Oregon, Indiana, Seton Hall and others. Syracuse was three deep with head coach Jim Boeheim and assistants Gerry McNamara and Adrian Autry for the Team Final game Thursday afternoon at the Peach Invitational. Seton Hall had associate head coach Shaheen Holloway and assistant Grant Billmeier. Oregon had head coach Dana Altman and assistant Mike Mennenga. King and Reddish have had a hectic week. They finished third in the World Cup last weekend, losing to R.J. Barrett and Canada on Saturday and then rebounding to beat Spain in the third-place game on Sunday. They then flew here to compete in the Peach Jam play-in game on Wednesday, losing to Nike Team Florida before landing in the Peach Invitational. Still, several reporters trekked out to this event to talk recruiting with Reddish and King. Reddish said he’s considering Duke, Kentucky, Villanova, Maryland, Arizona, UCLA and UConn and that he plans to cut his list to “five or six” after Peach Jam and then decide in “November or December-ish.” Asked about a possible package deal with King — or anyone else — Reddish said: “It’s a possibility. At the end of the day I have to do what’s best for me. I will make my decision off of what I feel like I need, not anybody else.”   **For more on Reddish, click here.