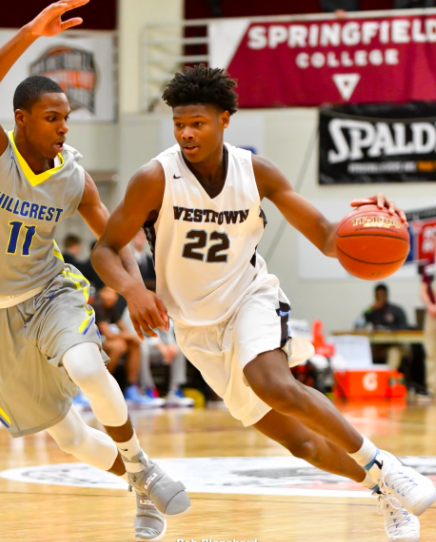 NORTH AUGUSTA, S.C. – Cameron Reddish will have some exciting stories to tell about his summer vacation when he gets back for his senior season at the Westtown (Pa.) School in the fall.
The 6-foot-7 Duke target has already played basketball in Italy and Egypt this summer. He averaged 10.7 points and 4.3 rebounds for the USA U19 team that finished third at the FIBA U19 World Cup in Cairo on Sunday. He then flew here this week to compete in the prestigious Nike Peach Jam. His Team Final AAU squad lost a play-in game on Wednesday, and thus ended up in the less prestigious Peach Invitational Tournament. Reddish opted to rest on Thursday instead of play in his team’s games. Still, several reporters made the trek from Peach Jam to get the latest on his summer of travel and his upcoming recruiting plans. “It’s been real hectic,” Reddish said. “My flight got canceled. I got home at like 4 in the morning [before Peach Jam], I had to wash clothes and I had to fly out there. It was crazy but we got through it.” Click here for the full story at the Herald Sun   Follow Sean on Twitter