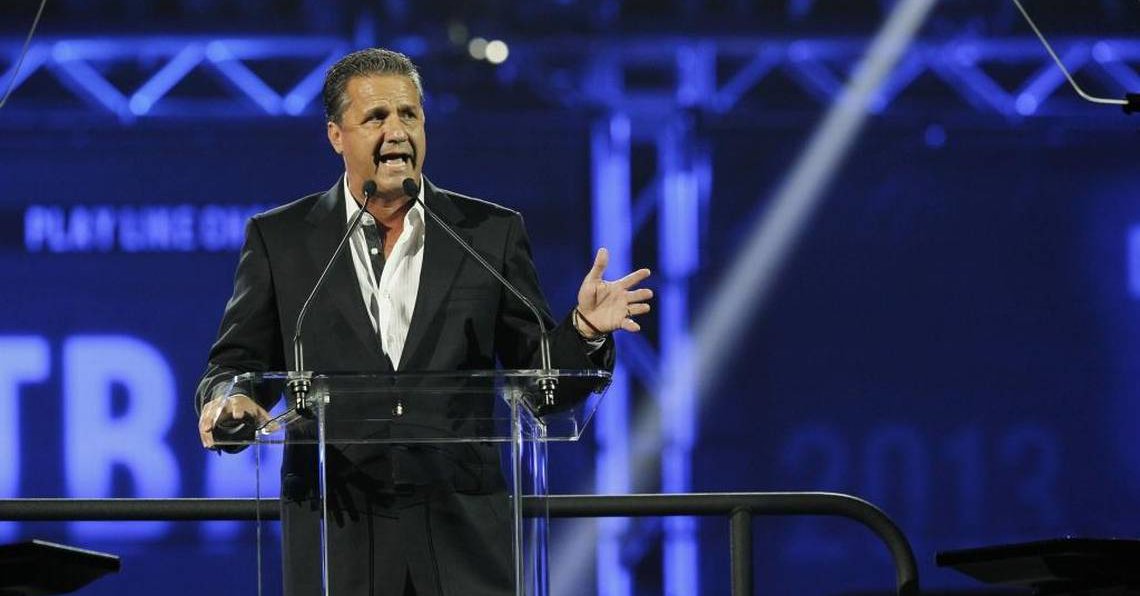 When the list of participants for the upcoming USA Basketball U19 World Cup Team training camp came out on Thursday, five were current high school players. Bol Bol, Louis King, Romeo Langford, Cam Reddish and Immanuel Quickley are the five rising seniors among the 28 players invited. Four of those five players — everyone except King out of Hudson (N.J.) Catholic — hold scholarship offers from Kentucky in the Class of 2018. Kentucky has high interest in the 6-foot-8 King but has yet to offer. The 6-4 Quickley was the first point guard from that class to receive a Kentucky offer. Of the seven players with reported offers from Kentucky in the Class of 2018, four of them will be at the U19 trials. Langford is ranked No. 3 in the Class of 2018 by ESPN.com, while Reddish is No. 4, Quickley is No. 12, King is No. 37 and Bol is No. 40. The team, of course, is coached by Kentucky’s John Calipari, who will now have access to these players during the tryouts June 18-20 in Colorado Springs, Colo., and to whoever makes the team for the World Championship in Cairo, Egypt July 1-9. Three Kentucky players — Hamidou Diallo, Kevin Knox and P.J. Washington — are also trying out for the team, while Kentucky’s Tai Wynyard will play for New Zealand and incoming freshman Shai Gilgeous-Alexander is expected to decide this week about playing for Canada. This won’t be the first time Calipari has coached such a team. He famously coached Karl-Anthony Towns on the Dominican Republic National Team, and Towns went on to play for Kentucky and become the No. 1 overall pick in the Draft. Calipari’s access to these current players will surely fan the flames for those who think USA Basketball coaches gain a recruiting advantage via their access to elite players during the summer. Calipari himself has said that Duke coach Mike Krzyzewski gained such an advantage by coaching the Senior National Team. Coach K acknowledged visiting Jahlil Okafor, Tyus Jones and Justise Winslow in 2014 when they were with the USA U19 team, but pointed out that other USA Basketball coaches — such as Florida’s Billy Donovan, who coached the U18 team — have a similar advantage. Okafor, Jones and Winslow, of course, went on to play for Duke and help lead them to the 2015 national championship. “It’s a concern [Calipari] has raised before,” Syracuse and USA coach Jim Boeheim said of Calipari in 2014. “That particular case he has mentioned. He’s said he thinks it’s an advantage. He got the No. 1 recruit in the country. It’s a little bit disingenuous of him. I like John. We get along fine. He feels Mike is getting an advantage. You could make that argument. But Duke isn’t getting any better players than they ever have.” Calipari then chimed in on Twitter defending Coach K and Boeheim:“The job that Coach K and Coach Boeheim have done to turn around USA Basketball, to make it what it is today is truly amazing. “If – and I emphasize if – they gained any advantage, because of that work, I don’t begrudge them in the least. “My time with the DR team showed me how hard & how much time it takes away from your own team & your recruiting to do those things right. “There’s not a college coach in the country that would say no to Jerry Colangelo if he asked them to coach the national team.” Now here comes Calipari coaching the U19 team in Colorado and Egypt. As an extra bonus, he’ll have access to five top rising seniors, some of whom may wind up playing for him at Kentucky.