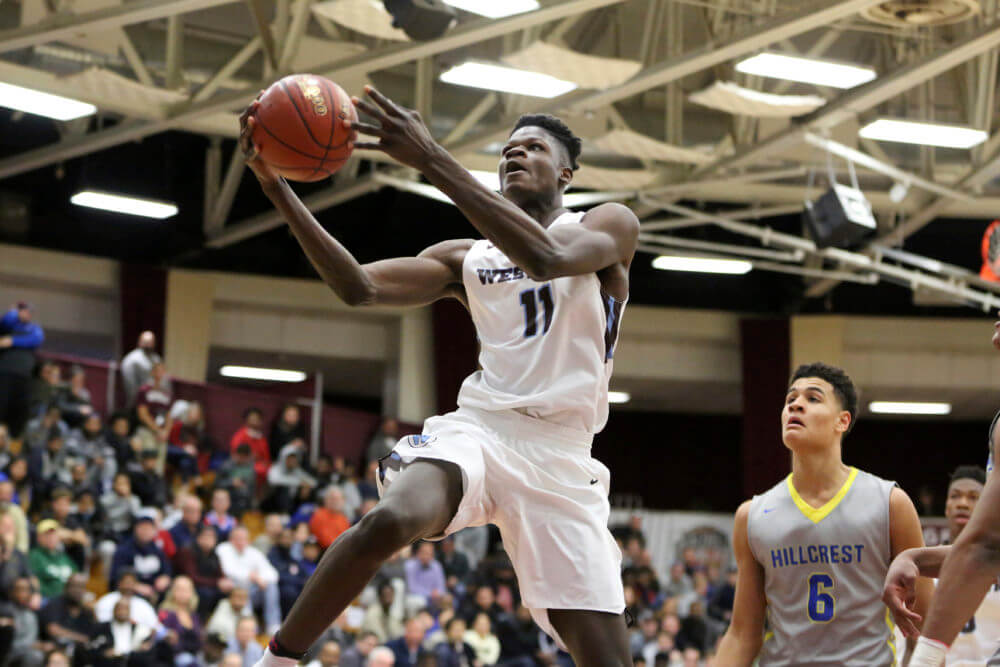 NEW YORK — Nick Richards and Mohamed Bamba are teammates here on the West team in the Jordan Brand Classic. And if Richards has any say, they will be teammates next year at Kentucky, too. “Nobody not gonna score any layups if we go to Kentucky,” the 6-foot-11 Richards told me here this week in advance of Friday’s Jordan Brand Classic at Barclays Center. “Blocking shots all day, every day.” During his run to the New Jersey Tournament of Champions title with The Patrick School, Richards would say that he wasn’t sure what Bamba was doing recruiting-wise and that he wasn’t getting involved. Now he’s actively trying to get the Harlem native to join him. “Of course, every day,” Richards said. Both Richards and Bamba are seen as defensive-oriented big men at this stage. At the Nike Hoop Summit, Bamba measured 7-foot even in shoes with a 7-foot-9 wingspan. DraftExpress.com noted that Bamba’s wingspan would currently be the longest of any player in the NBA, over the likes of Alexis Ajinca (7’8 3/4), Rudy Gobert (7’8 ½) and Boban Marjanovic. (7’8). “Bamba’s a very high IQ kid so he’ll bring that 7-foot, his height and his blocking and his wingspan,” Paul Washington, the Findlay Prep and Jordan West team assistant coach who is also the father of Kentucky signee P.J. Washington, said on The 4 Quarters Podcast. “But he’s a very smart kid so whoever gets him — hopefully, it’s Kentucky — is a perfect guy to protect the rim. I know the kids really like the fact that he’s behind them and if a guy gets by them they know that he’s he’s going to swat the shot. So whoever gets him is very lucky to have that wingspan.” Washington pointed out that P.J. “has a 7-2 wingspan” and that current Kentucky forward Wenyen Gabriel is “pretty long,” “so defensively a lot of it starts with that, so I’m excited to see what they do.” Kentucky now has a six-man recruiting class with the addition of 6-4 Los Angeles shooting guard Jemarl Baker. They also have 6-6 wing Hamidou Diallo in the fold after he enrolled in January. According to the latest 2018 mock draft from DraftExpress.com, Bamba is the projected No. 4 pick, Richards is at 18 and Diallo at 21. If Bamba were to pick Kentucky, they would have three of the top 21 projected picks in 2018. Bamba is mulling Duke, Kentucky, Michigan and Texas and said the decisions by Jarrett Allen to leave Texas, Marques Bolden to remain at Duke and Isaac Humphries to leave Kentucky don’t really impact him one way or the other.
“Not really, I honestly think I can play with anyone,” Bamba told FanRagSports.com. “Like I hate to brag, but I honestly think I’m that good of a teammate whether it’s my success or anyone else’s success. It matters to an extent, but I don’t think it really matters who’s coming back. “It’s more appealing. I’m not saying I would rather play with guys who are staying [in school], but I would rather learn from them and get what their experience was like while they’re there.”
Richards, meantime, would love Bamba to join him in the Bluegrass. (AP Photo/Gregory Payan)