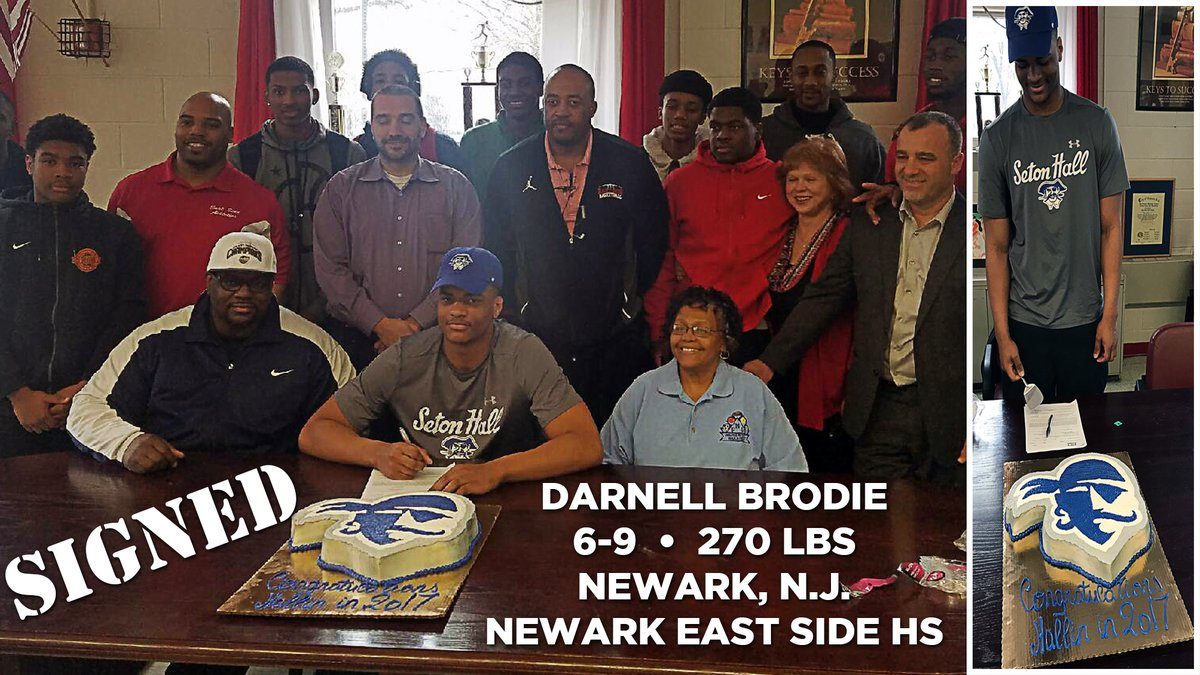 Darnell Brodie, a 6-foot-9, 270-pound forward from Newark East Side, has signed his National Letter of Intent to attend Seton Hall. Brodie, a three-star recruit as rated by 247Sports, is currently finishing his high school career at Newark East Side High School, the same school that produced current Pirates defensive star Ismael Sanogo (Newark, N.J.). Brodie spent his freshman and sophomore years at Newark East Side before transferring to Putnam Science Academy for a year and a half and then returning to East Side in January 2017. Brodie and Sanogo played on the same team in 2013-14 when Brodie was a freshman and Sanogo was a senior. Brodie’s addition is the latest in a successful string of local commitments to coach Kevin Willard and the Pirates that have helped the program win 46 games and make back-to-back NCAA Tournament appearances over the last two seasons. Since 2014, Seton Hall recruits from Metro New York/New Jersey, all three, four and five-star rated, have accumulated four All-Big East and eight All-Metropolitan selections. “We’re very excited to welcome Darnell to the Seton Hall Basketball family,” Willard said. “He is not only a great young man, but he is also a hard worker and talented defender. He is strong, wide-bodied with broad shoulders and will be a physical presence on the court for us. We’re looking forward to getting him here on campus to begin preparing for his freshman year.” Due to transferring in mid-year Brodie appeared in only six games as a senior with the Red Raiders in 2017, but he made an immediate impact with the school. In his first game back, he poured in 18 points and 14 rebounds in East Side’s Essex County Tournament semifinal win over Montclair Immaculate. East Side, under the direction of co-head coaches Bryant Garvin and Anthony Taveras, went on to win the Essex County championship, and Brodie helped the Red Raiders reach the final round of the North Jersey Section 2, Group 4 tournament with a double-double (12 points, 13 rebounds) in the first round win over Watchung Hills, 10 points in the quarterfinal win over Piscataway and eight points in the semifinal victory over Bridgewater-Raritan. “Everyone at Seton Hall will be happy with Darnell’s work ethic and what he can do,” Taveras said. “He has a great frame and is a good rebounder. He has the potential to be a great rebounder, the type of rebounder that has made Angel Delgado a household name. “Prudential Center is five minutes away from East Side High School, so it’s another opportunity for a local kid to stay home and play in front of his family. Darnell is a great fit for what Seton Hall is trying to do, and it’s good to continue sending our student-athletes to such a great school. The relationship Seton Hall’s coaching staff has built with East Side has been second to none.” Like Sanogo, Brodie also played AAU basketball with the NJ Roadrunners under coach Sandy Pyonin. In 2015, he was named the MVP of the The Hoop Group U16 Tournament after the Roadrunners captured the tournament title. Brodie is the second commit in Seton Hall’s freshman class of 2021, joining Myles Cale, a four-star, top 100 guard from Middletown, Del. They join a loaded returning Pirates squad that brings back four starters, 90.8 percent of its scoring and 91.2 percent of its rebounding. This includes the nation’s only active trio of 1,000-point scorers in Khadeen Carrington (Bronx, N.Y.), Angel Delgado (Bajos De Haina, Dominican Republic) and Desi Rodriguez (Bronx, N.Y.). Seton Hall awaits word on five-star point guard Trevon Duval, who is mulling Arizona, Baylor, Duke, Kansas and the Pirates and said he hopes to decide this month. Release: Seton Hall