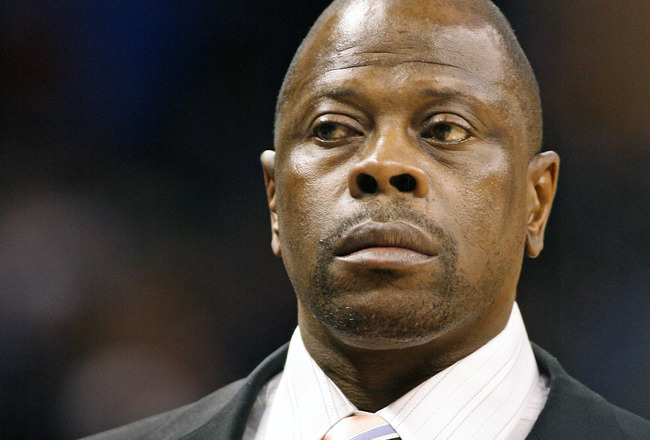 GLENDALE, Ariz. — Patrick Ewing is the new head coach at Georgetown and will be introduced during a press conference on Wednesday at 11 a.m EST. Ewing replaces John Thompson III, who was let go on March 23. Ewing, of course, played for Thompson’s father, Big John Thompson, at Georgetown, leading the Hoyas to three NCAA championship games and the 1984 NCAA title.

“My four years at Georgetown were the best of my life,” Ewing said in a statement. “Georgetown is my home and it is a great honor for me to return to my alma mater and serve as the next head coach.  I have been preparing to be a head coach for many years and can’t wait to return to the Hilltop.”

Ewing, 54, previously served as an assistant coach with the Wizards, Rockets and Magic before joining the Charlotte Hornets, where he’s currently the associate head coach.

“Patrick’s commitment to Georgetown and to further animating our legacy of excellence is inspiring,” said University President John J. DeGioia.  “He is a visionary leader with a deep connection to our community.  His experience as a coach over the last 15 years with some of the best basketball minds in the country has prepared him to lead our program.  We very much look forward to welcoming him back to our Hilltop as the Head Coach of our men’s basketball team.”

“After a very thorough national search, Patrick Ewing emerged as the talented leader best prepared to coach the Hoyas in this new era of highly competitive college basketball,” Georgetown Director of Intercollegiate Athletics Lee Reed said.  “To hire a head coach with this depth of coaching experience and personal achievements is tremendous.  It is a thrill to have him come back to his alma mater and continue the legacy of tradition and success he had as a student-athlete on the Hilltop.”

“It’s a big loss for us, but obviously we are all thrilled for Patrick to have this opportunity,” Hornets coach Steve Clifford told The Vertical on Monday afternoon.

“I think that he’s attacked the coaching profession in the same work manner that made him so successful as a player. He’s a nuts and bolts coach, detailed oriented and constantly looking for ways to make himself better. He’s going be a big loss here.”

Ewing has already begun reaching out to potential staff members about joining him at Georgetown, multiple sources told ZAGSBLOG. Buzz Peterson, a former head coach at UNC-Wilmington who now works with the Charlotte Hornets, is helping Ewing in that regard. Ewing, who was the No. 1 overall pick in the 1985 NBA Draft before enjoying a Hall of Fame career with the Knicks, would join former St. John’s legend Chris Mullin as Big East coaches. Like Mullin, Ewing has no experience as a head coach on any level and will have to assemble a staff that can recruit the rich DMV area effectively. “Patrick has such great reverence for Coach [John] Thompson and all he did for him – as well as all the other coaches he played for and worked under,” former Knicks coach Jeff Van Gundy told The Vertical. “But people would be underestimating Patrick if they felt he was going to try to completely emulate anyone else as a head coach. He’s going to be his own man.” Several coaches, including Notre Dame’s Mike Brey and Xavier’s Chris Mack, were previously approached for the job and turned it down, sources said. One of Ewing’s first moves will likely be to reach out to Tremont Waters, the Class of 2017 point guard who has asked for his release from the program.