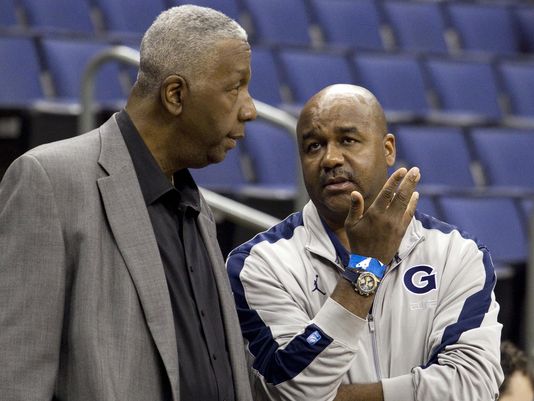 Georgetown on Thursday parted ways with Coach John Thompson III after 13 years. The news was first reported by CasualHoya.com and ESPN, and the school later released a statement. “It is with profound regret and deep appreciation that I informed John Thompson III this morning that the University will no longer be retaining his services as our Head Men’s Basketball Coach,” President John J. DeGioia said in a statement. “For thirteen years, he has been one of the elite coaches in college basketball. His performance as a coach has been exceptional, and he has served our community with remarkable distinction and integrity, sustaining our commitment to the academic performance of our students and providing them with the very best preparation for their lives beyond the Hilltop.” DeGioia said the school would conduct a national search. Among the names expected to be in the mix, sources said, are Harvard coach Tommy Amaker, former Georgetown and Knicks legend and current Charlotte Hornets associate head coach Patrick Ewing and Rhode Island coach Danny Hurley, who led the Rams to their first NCAA Tournament appearance since 1999. The Hoyas finished 14-18, 5-13 in the Big East. Thompson III went 278-151 in 13 seasons at the Big East school, but has missed the NCAA Tournament the last two seasons and in three of the last four. “I’m not sure I can put into words how frustrating it’s been,” JT3 said late last month after a loss at Seton Hall. “But the kids are still fighting and no one in that locker room has packed in the season yet. The kids are still fighting.” Georgetown students have petitioned for his firing, and a “Fire JT3” sign appeared at Madison Square Garden for a Georgetown-St. John’s game. Junior guard L.J. Peak declared for the NBA Draft and four-star point guard Tremont Waters — who said the staff told him he could be the next Allen Iverson — has asked for his release.