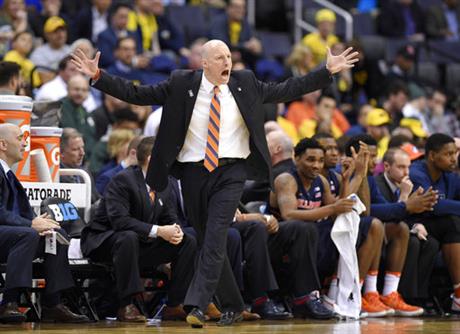 CHAMPAIGN, Ill. (AP) — Illinois basketball coach John Groce was fired Saturday after an 18-14 season in which his team was ninth in the Big Ten. The Illini made just one NCAA appearance in his five seasons at the school. Assistant Jamall Walker was appointed interim coach while the school searchers for a successor. Groce has two years left on his contract and will receive the balance, about $1.7 million. “Under his leadership, regrettably, we were not able to sustain the level of competitive excellence that we expect at the University of Illinois,” athletic director Josh Whitman said. “But that should do nothing to detract from the many wonderful things John has done on behalf of Illinois basketball during his tenure.” Groce was considered one of the nation’s hot coaches when he was hired in March 2012. He left Ohio University after coaching the Bobcats to an 85-56 record and two NCAA Tournament appearances in four seasons. In five seasons at Illinois, Groce was 95-75 overall and 37-53 in Big Ten play. The Illini were 8-10 in the conference this season, ending the regular season with a loss to last-place Rutgers. They lost 75-55 to Michigan in their conference tournament opener. The lone NCAA appearance for Illinois under Groce came in his first year. Then things got worse the next four seasons. The wins dropped from 23 to 20 to 19 to 15 from the 2012-13 season to 2015-16. The postseason was the same story: The Illini went to the NCAA round of 32 his first season and two NIT appearances followed. They did not play in a postseason tournament last season. The last time Illinois missed the NCAA Tournament four straight years was from 1976-80. Groce followed two coaches who had enormous success at Illinois. Bill Self went 78-24 and left to take over at Kansas. Bruce Weber followed, went 210-101 and was honored as national coach of the year in 2005 when he took the Illini to the national championship game for the first time. Whitman went with a big name when he hired a new football coach two days after taking the job in early March 2016 — Lovie Smith, the former Chicago Bears and Tampa Bay Buccaneers coach. Smith signed a six-year contract worth $21 million, including $2 million a year for the first two seasons. Photo: AP Follow Adam Zagoria on Twitter And like ZAGS on Facebook