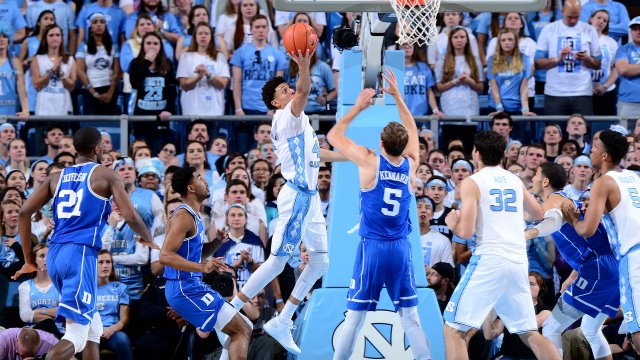 North Carolina junior wing Justin Jackson, the best player on the ACC’s best regular-season team, was named the ACC Player of the Year on Sunday. Jackson, a junior from Tomball, Texas, was the choice of 24 members of the voting panel (15 head coaches, selected media) that cast ballots for this year’s postseason honors. Wake Forest’s John Collins placed second with 15 votes. “It’s an honor and a blessing by my God,” said Jackson. “My teammates are a huge part of this award and I can’t thank my coaches and them enough.

“Justin has been really good from day one,” UNC coach Roy Williams said. “To have the kind of success shooting the ball and making big plays in key situations like he did against Duke is a credit to him and the amount of work he put in to improve his game. We went through a very difficult ACC schedule and Justin gave our players a lot of confidence knowing that he would consistently be putting up 18-20 points, about five rebounds and some key assists each game. He listened to our coaching staff last spring about how to improve as a player and was determined to get better and stronger, which through his hard work and sweat, he is now reaping the benefits.

“To come to Carolina as a home-schooled youngster and earn ACC Player of the Year honors in the best conference in the country in one of the ACC’s most competitive seasons ever is a tremendous achievement.”

All 30 NBA Teams Expected at ACC Tournament Loaded With Prospects