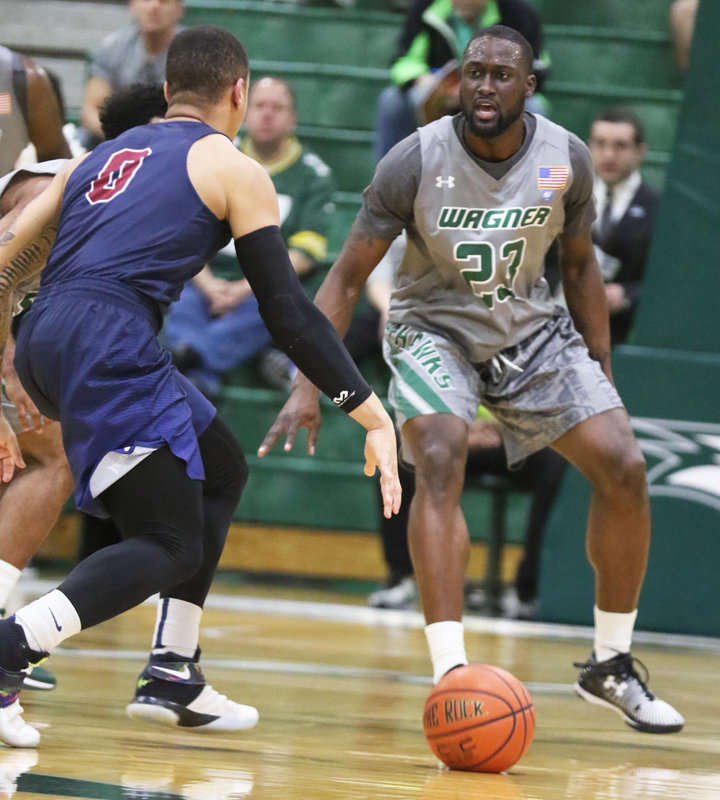 By: MIKE McCURRY The 36th edition of the Northeast Conference Tournament got underway on Wednesday, with eight of the league’s ten teams participating in the quarterfinals. It didn’t take long for a case of March Madness to infect the NEC. Aside from a 22-point St. Francis (PA) victory over Bryant, the other three quarterfinals were decided by a combined six points. #3 Wagner 72, #6 Fairleigh Dickinson 70 In a rematch of last year’s NEC title game won by Fairleigh Dickinson, Wagner knocked out the reigning champs behind Michael Carey’s career-high 32 points and 10 rebounds. It was the 26th career double-double for Carey, a Bahamas native who plays much bigger than his 6-foot-5 listing.

Wagner – FDU: Michael Carey Highlights
The senior with an unbelievable performance, scoring 32 points on 11-15 shooting along with 10 boards pic.twitter.com/MiYCZ0N1oE

Playing without Hazlet (NJ) native and Raritan High School product Mike Aaman, whose college career is over due to a torn left ACL, head coach Bashir Mason’s Seahawks scored 24 second chance points. Wagner is the country’s second-best offensive rebounding unit, trailing only North Carolina. FDU’s Darian Anderson, a Second Team All-Conference selection, had 19 points, 10 rebounds, and 4 assists for the Knights. #7 Robert Morris 69, #2 LIU-Brooklyn 68 Entering Wednesday, the top two seeds in the NEC Tournament were a combined 24-0 in the quarterfinal round over the previous 12 years. Nobody told that to head coach Andy Toole and Robert Morris, as the Colonials completed the league’s first “7-over-2” upset since 2004. Trailing by one with 12.9 seconds remaining, senior guard and Hudson Catholic (NJ) product Kavon Stewart got the matchup he wanted before hitting an off-balance, game-winning floater over NEC Player of the Year Jerome Frink, a former St. Anthony (NJ) Friar.

Stewart had 11 points, while teammate Matty McConnell chose the perfect night to go off, tallying a career-high 20 points on six made triples. Union Catholic’s (NJ) Isaiah Still, a Second Team All-Conference selection, recorded 19 points and 11 rebounds. Frink had just 10 points on 5-of-13 shooting for the Blackbirds. Iverson Fleming, a North Brunswick High School (NJ) product who was tabbed as the NEC’s Most Improved Player this year, also struggled, going for 10 points on 4-of-13 shooting. History is on Cinderella’s side, as Robert Morris has won a league-best eight NEC Tournament titles. #1 Mount St. Mary’s 76, #8 Sacred Heart 73 By virtue of winning the Northeast Conference regular season title for only the second time in program history, Mount St. Mary’s has at the very least secured an NIT bid. But NEC Coach of the Year Jamion Christian and the Mountaineers have a bigger goal: return to the NCAA Tournament for the first time since 2013-14. Those dreams narrowly remain intact following a three-point, nail-biting quarterfinal win over 8th-seeded Sacred Heart. 5-foot-5 junior Junior Robinson made clutch play after clutch play down the stretch, finishing with a game-high 22 points. First Team All-NEC selection Elijah Long chipped in with 19, while All-Rookie Team member Miles Wilson scored all ten of his points after halftime. Mount St. Mary’s, looking to become the first top seed to win the NEC Tournament since 2011-12, are now just two wins away from accomplishing that feat. #4 St. Francis (PA) 100, #5 Bryant 78 The St. Francis Red Flash became the first team in a decade to drop triple-digits in a Northeast Conference Tournament contest, shooting a blistering 61 percent from the field in the process. NEC Rookie of the Year Keith Braxton, a 6-foot-4 guard who hails from The Lawrenceville School (NJ), went off to the tune of 22 points, 10 boards, 7 assists and no turnovers. The league’s Defensive Player of the Year, Josh Nebo, had 8 points, 14 boards, and 5 blocks. Isaiah Blackmon poured in 24 points for good measure. Much like the NFL playoffs, the seeding is reset for the semifinals, as the top seed is guaranteed to play the lowest-remaining opponent. As a result, Saturday’s schedule is as follows: #4 St. Francis (PA) at #3 Wagner—12:00 p.m. #7 Robert Morris at #1 Mount St. Mary’s—2:00 p.m. Both semifinal affairs will be broadcast live on MSG. The NEC Tournament final is set for Tuesday (7:00 p.m., ESPN2) on the campus of the highest remaining seed. Photo: Staten Island Advance Follow Mike on Twitter Follow Adam Zagoria on Twitter And like ZAGS on Facebook