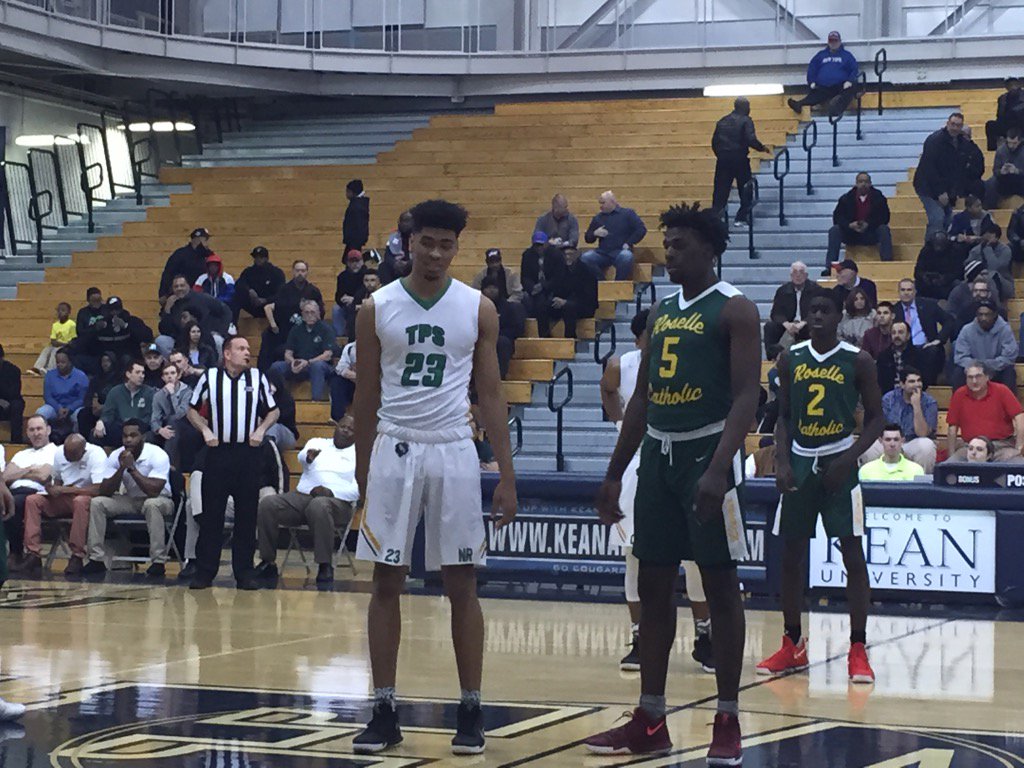 UNION, N.J. — The outlook didn’t appear great for Nick Richards and The Patrick School entering the fourth quarter of their Union County Tournament semifinal on Tuesday night. The 6-foot-11 Kentucky-bound big man had just three points to go with his three fouls and the defending champion Celtics trailed rival Roselle Catholic by three points entering the final stanza. “It’s my last year as a senior, I don’t want to go out losing like this so I had to turn up,” Richards said. “I had to leave it all out there.” Richards did just that, scoring 10 of his 13 points in the fourth as No. 2-seeded Patrick School outscored No. 3 Roselle Catholic, 26-14, en route to a 55-46 victory at Kean University. Richards added eight rebounds as his team improved to 3-0 against Roselle Catholic this season. The Celtics will play for their fourth Union County crown in five years when they meet No. 1 Linden — a 49-38 winner over No. 4 St. Mary’s (Elizabeth) — in Saturday’s championship game. The Patrick School and Linden have split two meetings this season. Minnesota-bound shooting guard Jamir Harris added 12 points, uncommitted junior big man Valdir Manuel added 10 and Monmouth signee Marcus McClary scored eight. Roselle Catholic junior big man Naz Reid, who battled Richards in the paint all night, led the Lions with 12 points and eight rebounds.

Naz Reid with the dunk in the Union County semis

Trailing 32-29 entering the fourth, Richards had been virtually invisible through the first three periods. “It was frustrating,” he said. “But I had to get over it, I had to start leading as a senior and I’m glad we came up with a ‘W.'” Richards had two dunks in the fourth period, one off a nice feed from McClary, and also went 4-of-6 from the line. “Yeah, they were set-up plays [on the dunks],” Richards said. “They were doubling me in the post so my coaches had to figure out how to get me the ball. So they set up a pick-and-roll to get high energy on the offensive rebounds and I would be good.” Said Chris Chavannes, the Patrick School co-coach and principal: “I was proud of [Richards]. He did what he was supposed to do for us. You can struggle the whole game, but he made plays, some key blocks and big rebounds down the stretch. So he was huge. “And to their credit, I really thought Nazi did a good job of pushing him off the block.” A McDonald’s All-American Richards has had an up-and-down couple of weeks. He was suspended for two games after an altercation on Feb. 5 with Union Catholic and Dayton-bound big man Jordan Pierce. When he returned on Feb. 13, he managed eight points and 11 rebounds while fouling out in a win over Archbishop Molloy in a game watched by Kentucky coach John Calipari. “We hadn’t played in 11 days, 12 days and the kids only played about three minutes [in the quarterfinals], the kids who got playing time and we played the reserves and so I think that definitely had an impact just with the raw play on both ends and the poor timing on defense and offense,” Chavannes said of his team’s layoff coming in. Richards and his teammates made it clear that their ultimate goal is to win the program’s sixth Tournament of Champions title next month. But first they are trying to take care of business in Union County. “I know sometimes during the season we got ahead of ourselves talking about the Tournament of Champions but I made it clear to the kids that this is what’s expected of us,” Chavannes said. “This is a big goal so it’s important to take care of business. We didn’t look past them, we knew it would be a tough game down the stretch.” After Saturday’s championship game comes the state tournament. And when that commences, Richards and his teammates have one simple goal. To prove “That we’re the best team in Jersey,” he said.   And like ZAGS on Facebook

John Calipari on Potential of Him Coaching the New Orleans Pelicans: 'Not Happening'