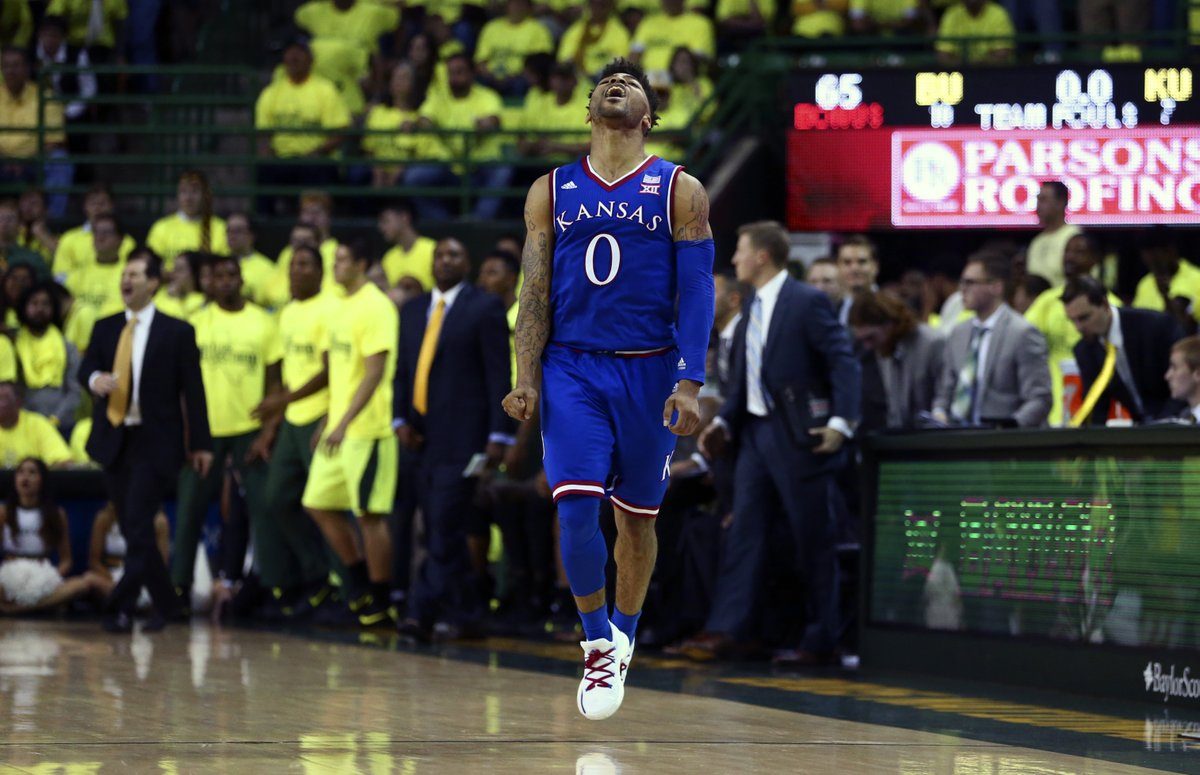 By MIKE McCURRY Kansas trailed Baylor by six points with three-and-a-half minutes left on Saturday. In other words, the No. 3 Jayhawks had the No. 4 Bears right where they wanted them. Just days after pulling off an unfathomable rally in a victory over No. 9 West Virginia, Kansas continued its comeback ways against Baylor, scoring the game’s final eight points and escaping Waco with a 67-65 win. Frank Mason had 23 points, 8 assists, and 2 steals to lead Kansas, which is now one win away from clinching at least a share of the Big-12 regular season title for the 13th consecutive season. Fellow senior Landen Lucas provided the go-ahead points by securing an offensive rebound, drawing a foul, and calmly draining a pair of free throws to break the 65-all tie. Manu Lecomte, who dealt with a nagging ankle injury for much of the afternoon, missed a potential game-tying jumper at the buzzer, sending Baylor to its fourth loss in the last six games.

Here are five thoughts from Saturday:  1.   We might as well start referring to Kansas as the Comeback Kids… It’s better to be lucky than good, but the fact that Kansas completed two remarkable comebacks over Top-10 opponents in a single week is no fluke. The Jayhawks don’t get rattled when they’re down and they know how to win close games, two complementary traits that should go a long way for Bill Self and company come March. Kansas’ current four-game winning streak has come by a total of ten points. And on Saturday, KU was able to prevail despite trailing by as many as 12, shooting a combined 5-of-20 from behind the arc, and getting a subpar offensive showing out of Devonte Graham, who had 7 points, 7 rebounds, and 4 assists but made just 1-of-12 field goals. 2.     Baylor is one playmaker shy of being a legitimate national title contender… On the Bears’ final possession, head coach Scott Drew elected to call timeout and draw up a sideline out-of-bounds play. From a Baylor perspective, it didn’t go as planned.

Kansas has now won 10 straight vs Baylor. (via @CBSSports) https://t.co/0xM9isaBDv

I have two theories as to why. First off, the play was designed for Johnathan Motley to receive a diagonal lob pass on the weakside—which Kansas knew was coming. Listen to the “Lob, Lob!” shouts from (presumably) the Jayhawks’ bench as Ish Wainright inbounded the ball. That’s scouting at its finest, and it aided KU in securing the victory. Secondly, Baylor lacked another perimeter offensive threat to shake off the broken play and make something happen. Wainright panicked when Motley wasn’t open, instead throwing a cross-court pass to center Jo Lual-Acuil. Lecomte got the handoff with seven ticks remaining—plenty of time to make a play—but was immediately double-teamed by Josh Jackson, who wisely chose to leave Lual-Acuil open. With Lucas fronting Motley and neither Wainright nor Jake Lindsey open, the best the Bears could do was have Lecomte—who again, was already severely limited by that ankle injury—throw up a prayer of a jumper under Jackson’s outstretched hands. Good guards are what win in March. And behind Lecomte, Baylor is void of that second perimeter playmaker offensively. 3.     Frank Mason put the team on his back, again… Kansas certainly is not bereft of backcourt playmakers. Mason is one of America’s finest in that regard, and on Saturday he put the Jayhawks on his back for the second straight game. In the second half, the 5-foot-11 point guard scored 16 points on 5-of-6 shooting to go along with 3 assists, including this pretty dime to Jackson.

Frank Mason drops one to Josh Jackson for the strong slam inside!#KUvsBaylor

Mason, who draws nearly six fouls per 40 minutes, was a perfect 8-of-8 from the charity stripe against Baylor. He made 24 free throws this week alone. Jayhawks’ opponents made 29. Right after the game, Mason made sure to inform the masses of KU’s three-game Big-12 lead and inevitable regular season title.

4.     Once again, Baylor was done in by coughing up the rock… We warned you of Baylor’s poor turnover habits in the Weekend Shootaround. Well, the Bears’ Achilles’ heel reared its ugly head once again on Saturday, as Kansas converted 16 Baylor turnovers into 20 points. Motley was the main culprit, committing six turnovers all by his lonesome. As much of a death sentence as this is for Baylor—the Bears are 286th in Turnover Rate out of 351 Division-1 teams—Kansas’ defense deserves some credit. The Jayhawks forced turnovers on 24.6 percent of its defensive trips on Saturday, their best mark of the season. And here’s another KU defensive nugget for all the haters out there: Baylor made just 42.1 percent of its two-pointers, the Bears’ second-lowest mark this year. “We did a lot of really good things defensively the second half,” Self said afterward. 5.     Landen Lucas is the prototypical glue guy… Mason delivered another National Player of the Year-type performance, but Saturday’s game ball should arguably be awarded to Lucas. Lucas collected 8 points, 7 rebounds, and 3 blocks. Just as importantly, he went blow-for-blow with Motley, who dropped 19 points but on 8-of-21 shooting. Six of Lucas’ boards came on the offensive end. One of those led to the Jackson dunk shown above (see the very beginning of that clip). The last one, in which Lucas came from out of nowhere—taking advantage of Baylor switching to a zone, which left the Bears vulnerable on the defensive glass—led to his game-winning free throws.

Landen Lucas was here when the shot went up before grabbing the game-winning OR. How does he keep doing this? pic.twitter.com/nsQZuAeEes

Speaking of which, the nation’s prototypical glue guy may double as a prophet. I leave you with Lucas’ tweet from Monday, after he missed five of seven freebies against West Virginia.

Don't worry y'all i'm about to get in the gym and shoot some free throws lol ? Big time win though. Thanks for sticking with us!!!!