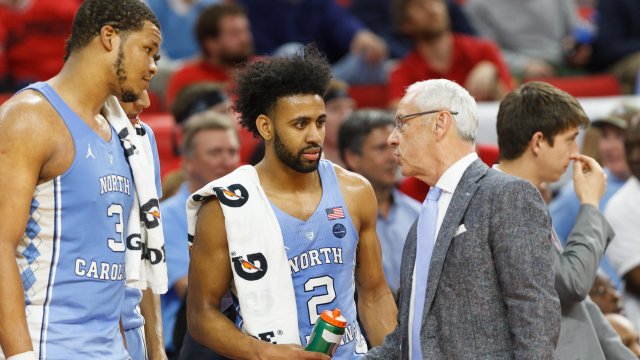 By MIKE McCURRY  Being that we’re entering the hypothetical fourth quarter of conference play, it’s an opportune time to introduce Weekend Shootaround—your guide to the college hoops slate running from Friday thru Sunday. This particular weekend features a Big-12 heavyweight fight that could all but ascend Bill Self into a stratosphere solely occupied by John Wooden; an ACC matchup consisting of the nation’s 4th best offense and 4th best defense; and a showdown between two of the three teams currently tied for first place in the Big Ten.   No. 3 Kansas at No. 4 Baylor—Saturday, 1:00 p.m. (CBS) It’s not exactly breaking news that Kansas has won at least a share of the Big-12 regular season championship for 12 consecutive years under Self. But did you know only Wooden’s UCLA Bruins have done so more? They reeled off 13 straight league championships from 1967-1979—not even Geno Auriemma can claim such a feat. As it stands, Kansas is 11-2 in the Big-12, a full two games up on Baylor and three games up on both West Virginia and Iowa State. Basically, if the Jayhawks can find a way to win in Waco on Saturday, Self could go ahead and start informing people that he wants to be known as the Wizard of Lawrence going forward. The Jayhawks enter the weekend on a three-game win streak, aided by a highly improbable comeback victory against No. 9 West Virginia on Monday. Baylor, meantime, has lost three of five, with the first of those coming in a 73-68 loss at Kansas back on February 1st. One of the main keys Saturday for the Bears will be keeping All-American candidate Johnathan Motley engaged for a full 40 minutes. Motley looked unstoppable in the first half of that first meeting with Kansas, dropping 14 points on 6-of-10 shooting, before disappearing in the latter frame (2 points on 1 shot). The Jayhawks’ effective zone had a lot to do with that, as did Baylor’s second-half carelessness—KU converted 8 Bears’ turnovers into 16 points over the latter 20 minutes. It will be interesting to see if Kansas turns up the heat defensively and extends ball pressure. Not only was it productive in Kansas-Baylor Part I, but pressing and creating havoc was the Jayhawks’ primary key to victory late against WVU. Oh, and Baylor is turning the pill over more frequently than any other Big-12 team in league play (21.9% Turnover Rate). If the Bears wants to preserve that No. 1 seed in the NCAA Tournament and stay in the Big 12 race, they must consider Saturday nearly a must-win.   No. 14 Virginia at No. 10 North Carolina—Saturday, 8:15 p.m. (ESPN) ESPN’s College Gameday heads to Chapel Hill to see KenPom’s 4th-best offense in the country (North Carolina) take on KenPom’s 4th-best defense (Virginia). Perhaps Jay Williams can suit up for the Cavaliers and provide the solution to their recent offensive woes. Virginia is looking to avoid its first three-game losing streak since the days when Joe Harris was Big Man on Campus. Tony Bennett’s guys can do so mainly by keeping UNC away from the offensive boards—not a small task, by any means. Here’s why: Saturday doesn’t just pit the ACC’s best offensive rebounding team (UNC, which corrals 43 percent of its missed shots) with the league’s top defensive rebounding team (Virginia, which holds its opponents to one-and-done trips nearly 78 percent of the time). The Tar Heels’ second-chance success (or lack thereof) is the ultimate harbinger of the game’s final outcome, with the key number being set at 30 percent. UNC is 21-1 when its Offensive Rebounding Rate is at least 30 percent. They’re 1-4 when it falls below that threshold. Of course, this might not matter if Joel Berry or Justin Jackson throw a party behind the three-point line, but that’s unlikely to occur based on UVA’s stout perimeter defense. Should any, or all, of Isaiah Hicks, Kennedy Meeks, and Tony Bradley help themselves to a large plate of glass when the Tar Heels have the ball, the panic alarms might begin sounding in Charlottesville. Another storyline surrounding this one is the ACC race, where the top six teams are separated by two games. UNC is 10-3, holding a slim one-game lead over Louisville, Duke, and Florida State. Notre Dame is 9-5, while Virginia is 8-5. The conference tournament in Brooklyn is going to be ridiculously entertaining.   No. 23 Maryland at No. 11 Wisconsin—Sunday, 1:00 p.m. (CBS) Entering the weekend, Purdue, Wisconsin, and Maryland are all tied atop the Big-10 standings at 10-3. The 16th-ranked Boilermakers host Michigan State on Saturday. In their first meeting this year, Caleb Swanigan went for 25 points and 17 boards versus the school he originally committed to, and Miles Bridges poured in 33 points in a losing effort (Side note: That’s a must-watch mano y mano). On Sunday, Maryland travels to Wisconsin. The biggest question is the injury status of Badgers’ point guard Bronson Koenig, who sat out Thursday’s loss at Michigan with a calf injury.

According to my sources #Badgers guard Bronson Koenig is NOT out for the season. But no word on when he might return.

If Koenig can’t go, expect freshman D’Mitrik Trice to run the show again. The stage seemed to overwhelm him in Ann Arbor, when he shot 2-of-15 from the field. About half of those attempts need to go to senior Nigel Hayes against the Terrapins.

With Bronson Koenig out for #Badgers, Nigel Hayes has to take more than seven shots. Period. End of story.

Maryland added an impressive road victory at Northwestern on Wednesday, in which Melo Trimble exploded for a career-high 32 points. The junior (who seems like he’s been in college for seven years already) must be licking his chops at the thought of facing the inexperienced Trice, assuming Koenig can’t go. One more thing from this game: Terps’ head coach Mark Turgeon is not getting enough credit around the country for the job he’s done this year. Last year’s somewhat underachieving Sweet-16 squad lost Robert Carter, Diamond Stone, Rasheed Sulaimon, and Jake Layman. Yet here we are in mid-February, and Maryland is tied for first place in the Big-10 despite three of their top-four leading scorers being freshmen in Justin Jackson (11.0 PPG), Anthony Cowan (10.7), and Kevin Huerter (9.0). Photo: @UNC_Basketball Follow Mike on Twitter Follow Adam Zagoria on Twitter And like ZAGS on Facebook