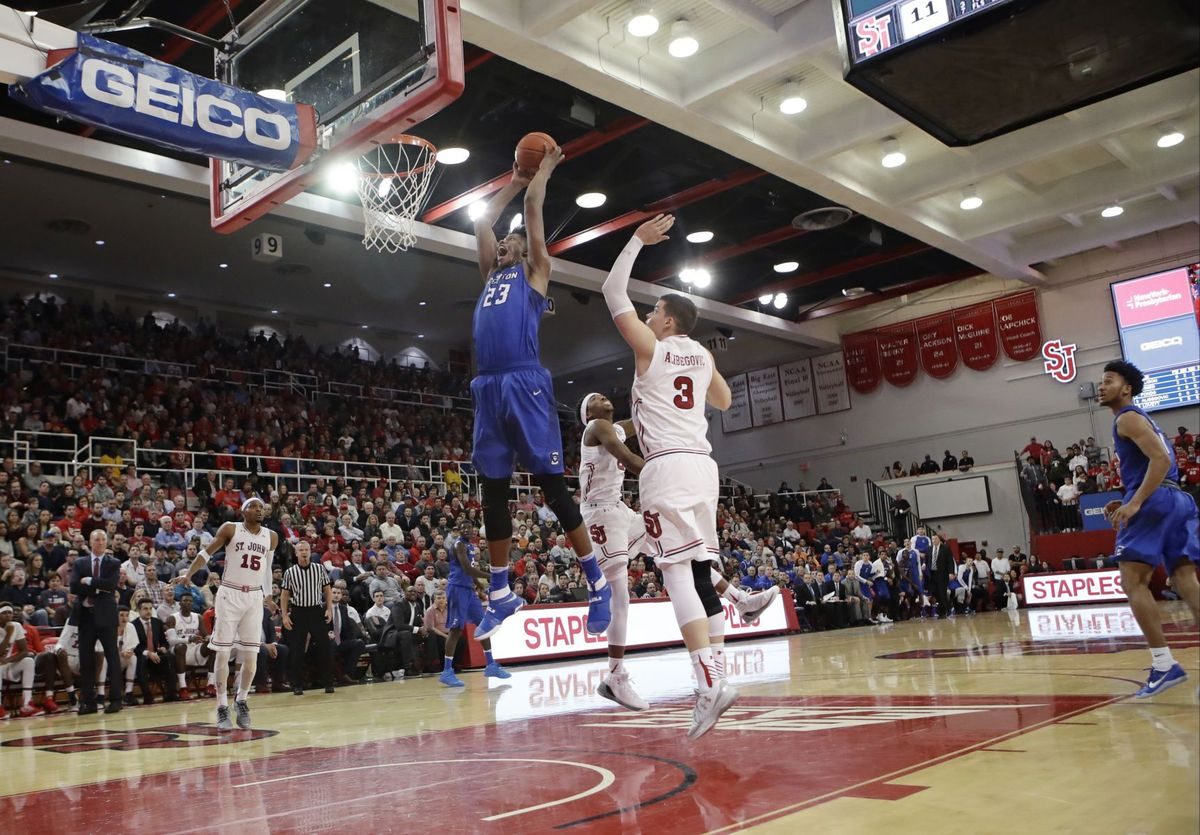 The Knicks may just want to go ahead and begin an all-out tanking effort. At 21-28 and situated in 11th place in the East, the Knicks appear to be going nowhere. Again. So maybe Phil Jackson should just trade Carmelo Anthony for the best package of picks and prospects available. And try not to get fleeced in the process. The 2017 NBA Draft is among the most loaded in recent memory and the Knicks actually own their pick this year. So maybe they should “Throw their hat in for Patton” or “Let themselves flatten for Justin Patton.” (Props to Josh Newman on the latter. For more #Tank Slogans, read this.) The latest mock draft from DraftExpress.com has the Knicks taking 7-foot Creighton freshman Justin Patton with the No. 12 pick. Until now, the site had Patton projected as a lottery pick in 2018. Now the big man who’s averaging 14.0 points, 6.4 rebounds and 1.6 blocks for a Creighton team (19-3) that visits Butler Tuesday night has moved into the 2017 lottery. Patton would be a tremendous pick for a Knicks franchise that could use an injection of youth at the center position, where Joakim Noah is averaging 5.2 points and 9.0 rebounds. “He’s getting better every day,” one NBA scout said of Patton earlier this month. “He’s only a freshman whose body needs to improve.” “The sky is the limit, he has tremendous upside,” a second scout said. On the night that Patton went off for 25 points and 9 rebounds against St. John’s, Chris Mullin said: “He reminds me of Marcus Camby. [He has] great hands and even banged a three. Especially tonight, he looked All-NBA.” Regardless of whether they land Patton or not, the Knicks would have a variety of great options if they were to finish with the worst record possible. Two elite Pac-12 point guards — Washington freshman Markelle Fultz and UCLA freshman Lonzo Ball — remain the projected top two picks in the latest mock. Following Fultz and Ball, the site has Kansas wing Josh Jackson at No. 3, N.C. State point guard Dennis Smith Jr., at No. 4, Duke small forward Jayson Tatum at No. 5, Florida State small forward Jonathan Isaac at No. 6, Arizona power forward Lauri Markkanen at No. 7, Kentucky point guard De’Aaron Fox at No. 8, Kentucky shooting guard Malik Monk at No. 9 and international point guard Frank Ntilikina at No. 10. That’s five point guards in the Top 10, a position where the Knicks would be in major need should they opt not to re-sign Derrick Rose. Kentucky (4), Duke (3)  and Arizona (3) have 10 combined players in the mock. For Kentucky, in addition to Monk and Fox, freshman power forward Bam Adebayo is projected at No. 20, while sophomore guard Isaiah Briscoe is No. 50. In addition to Tatum, Duke has power forward Harry Giles at No. 17 and junior shooting guard Grayson Allen at No. 37. On top of Markkanen, Arizona has freshman guard Kobi Simmons is at No. 43, with sophomore shooting guard Allonzo Trier at No. 48.   LOOKING AHEAD TO 2018 Arizona-bound 7-footer DeAndre Ayton remains the projected No. 1 pick in 2018 and that doesn’t figure to change anytime soon. Luka Doncic, a shooting guard from Real Madrid, is projected at No. 2, followed by uncommitted 7-footer Mohamed Bamba at No. 3, Washington signee Michael Porter Jr. at No. 4, Duke-bound power forward Wendell Carter at No. 5, undeclared point guard Trevon Duval at No. 6, Alabama signee Collin Sexton at No. 7, German small forward Isaac Bonga at No. 8, undeclared small forward Kevin Knox at No. 9 and Miami-bound wing Lonnie Walker at No. 10. Duke has four players in the 2018 draft, with Carter, sophomore shooting guard Luke Kennard at No. 15, freshman big man Marques Bolden (formerly in 2017) at No. 17 and freshman point guard Frank Jackson at No. 34.   Follow Adam Zagoria on Twitter And like ZAGS on Facebook