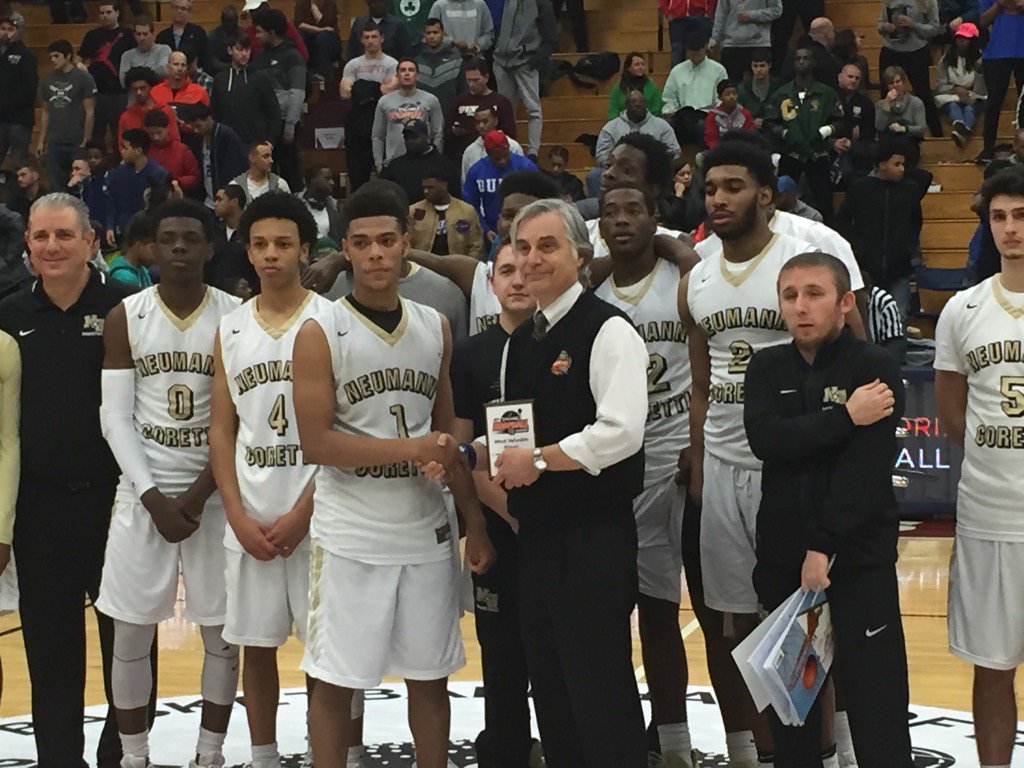 SPRINGFIELD, Mass. — One day before his team was to play at the Hoophall Classic, Kentucky-bound point guard Quade Green went into the Westtown (PA) School practice and delivered a message to Mohamed Bamba. “I walked right into their practice and said ‘BBN.’ I just gave him a smirk and just left,” Green recounted Sunday after putting up 30 points and 10 assists en route to MVP honors as Neumann Goretti held off Greensboro Day School (N.C.), 72-69. “[Bamba] just laughed.”

Yes, Green is coming through on his promise to recruit other top players — including his former PSA Cardinals teammate Bamba — to join him at Kentucky next fall. “Quade has really been relentless,” the 6-11 Bamba said Saturday night with a smile while declaring that he had cut his list to include Kentucky, Duke, Texas and Michigan. “He’s been following us around campus. It’s annoying.” Green and Bamba played together all summer on the PSA Cardinals, taking the team to the Peach Jam finals where they lost to a MoKan Elite team feature Michael Porter Jr. (who plays here on Monday) and Trae Young. Green and Bamba also won a gold medal together with the USA U18 team, a group that also included Kentucky-bound forward P.J. Washington and new Kentucky guard Hamidou Diallo. So Green knows what Bamba brings to a team and would love to have him at Kentucky, too. “[He brings] the length for the big men and the pick-and-rolls he got length so the guard can bounce out,” Green said. “I can get back and guard my man and he’s a shot-deflector and he changes shots.” While Bamba is still undecided, the 6-6 Diallo is already in the fold at Kentucky. “Oh, he’s going to be a monkey, hanging on the rim, athletic, an energy guy,” Green said. “Oh man, my best friend, who wouldn’t want to play with their best friend?” Told that Diallo has been recruiting Bamba to Kentucky since before he committed last weekend, Green didn’t sound surprised. “I don’t know what their situation is but me and Mo, I tell him every day, ‘BBN,'” Green said. Green said he texted Diallo to ask about his time at Kentucky. “He said he’s loving it,” Green said. Both Green and Bamba plan to obtain intelligence from Diallo on how the Kentucky program is run. “Oh, everybody using Hami as a spy,” Green said. “Me, Jarred [Vanderbilt], Nick [Richards], P.J. [Washington], we all in group chats and we all asking Hami, ‘What’s this, what’s that?'” Diallo is eligible for the 2017 NBA Draft, but is planning to redshirt this year and play the 2017-18 season. Asked if he’s certain Diallo will be there when the new recruits arrive, Green said, “Man, people got dreams. If he wants to chase his dreams, that’s what he’s gonna do. If he stay, it’s great. Other than that, I don’t got nothing to say.” Kentucky coach John Calipari is also recruiting 2018 Westtown point guard Cam Reddish, who went for 22 points in Saturday’s win over Arizona-bound DeAndre Ayton and Hillcrest Prep (AZ). Asked if he was also recruiting Reddish, Green said, “No, I don’t really talk to Reddish like that.” After seeing Reddish and Bamba on Wednesday at Westtown, Calipari watched Green play that night against Roman Catholic. As for his own season, Green was beset early by back and ankle injuries. He said the back ailment happened during the Imhotep Charter game in mid-December when opposing players “came down on my back.” Green still managed to go for 37 points in that game, an 87-73 win. “My back, my ankle was hurting, but now we all healthy so we have to get back on track,” Green said. “I got my legs under me, it was over from there.” Said Goretti coach Carl Arrigale: “He’s finally close to where he was before he got injured. First it was his back and then he played with a bad back and over-compensated and I think he banged his ankle up pretty good and he missed like three straight [games]. He wasn’t practicing. He was probably almost 10 days off the court.” Green and Villanova-bound Dhamir Cosby-Roundtree (17 points) combined for 47 points in Sunday’s win and Arrigale said now the team’s other players can play their roles with Green back. “Just having him out there makes the other guys better and feel more comfortable,” Arrigale said of Green. Temple-bound small forward JP Moorman went for 26 in the loss for Greensboro. “[Temple coach] Fran [Dunphy] is a great guy so I was happy for Fran to realize he was pretty good,” Arrigale said. Meantime, Green is getting a taste of #BBN in Philadelphia because Kentucky fans sometimes show up to watch his games. “Yeah, it was a couple of them, they had their own Kentucky section there so it was good,” he said. When the Goretti warmups went missing, Green warmed up for games in his Kentucky sweats. “Somebody stole our warmups, but it’s just motivation for me every day,” Green said. “I’m going to Kentucky so I gotta bring my best every day.”   Follow Adam Zagoria on Twitter And like ZAGS on Facebook